The removal of 75 dangerous and congested level crossings across Victoria is being fast tracked and the State Government is preparing to award $1.5 billion worth of work contracts to get the job going on nine level crossings as well as accelerate seven others to be removed ahead of schedule.

“Every level crossing removal makes our streets safer, improves traffic flow and allows us to run more trains – in addition to creating hundreds of Victorian jobs.

“With a dangerous and congested level crossing to go every four weeks on average in 2021, we’re not wasting a minute getting rid of these relics of the past,” Premier Daniel Andrews said.

Due to past fatal accidents and near misses at the Union Road level crossing, its removal will make the communities in Surrey Hills and Mont Albert safer. In place of the level crossing, a rail trench is going to be dug to separate the road and tracks by 2023.

Extensive engineering and technical investigations found that building a new single premium station at a central location between Surrey Hills and Mont Albert will help reduce construction impacts and avoid the need to acquire homes and businesses for new stations. A centralised station will also provide more trains, more often for local commuters.

Works on the new central station for Surrey Hills and Mont Albert is due to commence in mid-2021, with major construction to begin in 2022.

“Getting rid of these dangerous and congested level crossings will make Surrey Hills and Mont Albert safer and easier to get around,” Member for Box Hill Paul Hamer said. 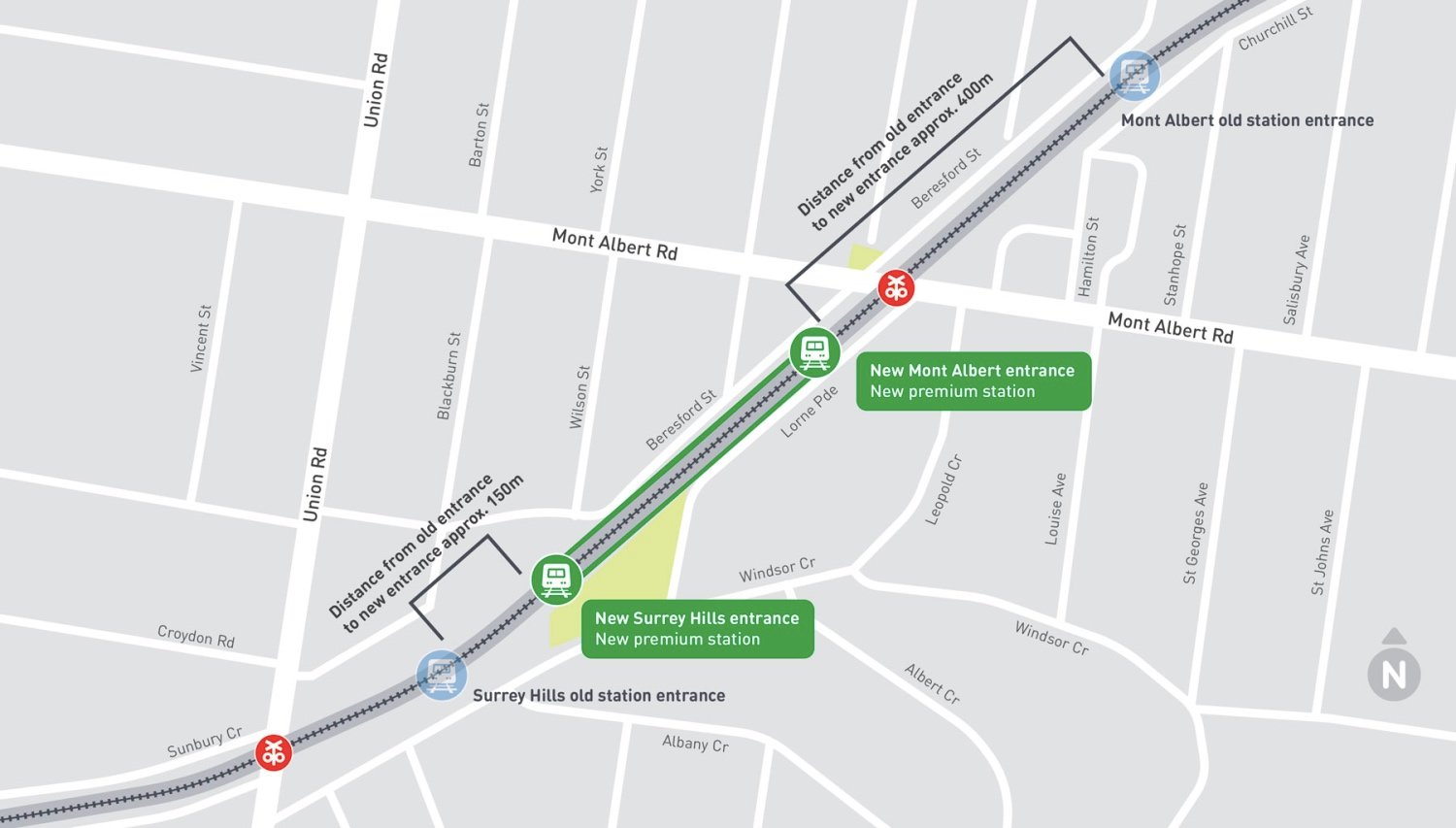 The Victorian Government will be building a new train station at Pakenham East as well, extending the metropolitan rail track by about two kilometres to help improve connections for the region’s growing community.

With V/Line and Metro trains merging onto shared tracks at Pakenham, the rail line hosts a major bottleneck. To bust this congestion and improve service reliability in the area, the new Pakenham East Station will include separate turnback tracks for Metro trains and dedicated V/Line tracks.

The track upgrades are going to be delivered as part of the McGregor Road, Racecource Road and Main Street level crossings removal. The project will include raising the rail line, building a new Pakenham station and delivering new space for community use.

Pakenham is expected to be boom gate-free in 2023/24, with safer and easier journeys for the more than 60,000 vehicles that pass through the level crossing in Pakenham every day.

In addition, the local community will benefit from a new premium elevated Pakenham Station that will provide better connections between metropolitan and regional train services.

“From Preston to Pakenham, our level crossing removals are freeing up our biggest rail and road bottlenecks to get Victorians moving faster – and we’re delivering them well ahead of schedule,” Minister for Transport Infrastructure Jacinta Allan said.

The $1.5 billion worth of fast-tracked contracts are anticipated to be awarded by the end of this year along with the acceleration of level crossing removals in Hallam, Williamstown, Deer Park Ardeer, Glenroy and Bell Street Preston.

The level crossing removals as well as construction of new stations will generate up to 3,400 direct local jobs.

Two more dangerous level crossings at Edithvale and Bonbeach in Victoria are set to be removed as part of the $2 billion investment for the Frankston Line Upgrade that will remove 13 level crossings and deliver 10 new stations.

Works to remove the level crossing at Ferguson Street in Williamstown, Victoria is due to begin in February of next year with project designs now finalised and a $192 million construction contract awarded to an alliance comprised of McConnell Dowell, Arup, Mott McDonald, Metro Trains and the Level Crossing Removal Project.

Victoria’s Hurstbridge Line Duplication project marks a new milestone with the final designs for the new Greensborough and Montmorency stations revealed to the public.