The first stage of road and rail improvements in Port Hedland, Western Australia is now underway, with the $31.48 million construction contract awarded to the Highway Construction and Albem Operations joint venture.

This stage of road and rail improvements is fully funded by BHP and delivered in partnership with the Western Australian Government through Main Roads WA.

“This is a fantastic example of industry and government working together to achieve benefits for the whole community.

“We have a strong focus on regional road safety, with major projects underway across regional WA to improve safety and create local jobs, including through our Regional Road Safety Program,” Transport Minister Rita Saffioti said.

The entire $68 million package of works will be delivered in phases, including:

“I've been stuck at these level crossings waiting for freight trains to cross many times.

“These upgrades will be very welcome by many locals who frequently drive this route between the airport and South Hedland,” Pilbara MLA Kevin Michel said. 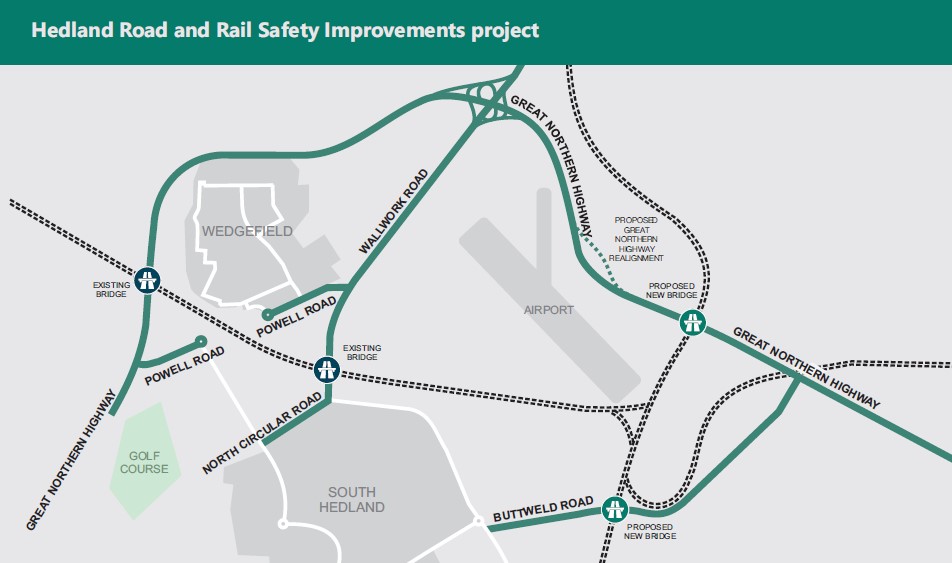 This project aims to improve safety and traffic flow at three key rail crossings in the Pilbara region as well as increase productivity and reduce road/rail conflict.

“This is an important package of improvements that will bring major safety and economic benefits to Port Hedland.

“The three rail crossings carry a total of 6,000 vehicles per day, and providing bridges not only removes the risk of accidents, but eliminated the need for people to wait in their vehicles while long freight trains pass by.

“My Government is pleased to partner with BHP and the Commonwealth to support these important upgrades,” Premier Mark McGowan said.

The Hedland Road and Rail Safety Improvements project is jointly funded by BHP and the Australian and Western Australian Governments – each contributing $45.26 million, $18.2 million and $4.54 million respectively.

Approximately 90 jobs are anticipated to be created over the life of the project, with project completion expected in late 2022.

“BHP is committed to the Pilbara and this funding package will improve safety at our level crossings and provide jobs to the local community while allowing travel around Port Hedland to become more efficient.

“There is nothing more important to BHP than the safety of our people and the community – we welcome the opportunity to work with the State Government and Main Roads on this important safety initiative,” BHP Western Australia Iron Ore asset president Brandon Craig said.

The first tranche of road safety upgrades – which is comprised of up to 15 projects – will soon ramp up across South Australia to help reduce road trauma and save South Australian lives.

Upgrades to improve safety on a 2.4-kilometre section of the Bruce Highway in Queensland is now underway. The safety improvements are being carried out approximately 1.5 kilometres north of Gin Gin in Bundaberg.

Significant upgrades to help relieve congestion in areas in Pyrmont around the Western Distributor and Anzac Bridge are going to be delivered, which will ultimately improve safety as well as reliability for commuters and local motorists.