Western Australia’s transformational project – the Bunbury Outer Ring Road (BORR) – has secured an additional $400 million funding commitment for its construction, as part of the 2022-23 State Budget.

This new funding takes the total investment in the biggest transport infrastructure project in the South-West to $1.25 billion. Not only will this significant investment from the State and Australian Governments deliver Stages 2 and 3 of the BORR, but it will also provide major economic benefits during the construction and operational phases.

“The Bunbury Outer Ring Road is the biggest transport infrastructure project ever planned or executed for South-West, which is already generating significant local economic and job opportunities.

“This increased investment aligns with the scale and complexity of this massive project and reflects the current market pressures.

“We know this project is going to deliver huge benefits for our economy, with up to 4,500 direct and indirect job opportunities during construction,” Transport Minister Rita Saffioti said.

The additional funding is the result of an independent cost review into the project that was commissioned by the Federal Government.

Key costs for the project – such as the cost of diesel and bitumen supply – are the result of rising supply and demand pressures and the additional investment will help address cost pressures as well as enable local businesses to continue to participate in the project.

The development of the BORR is targeting to spend around $450 million locally as well as a further $30 million worth of opportunities provided for Aboriginal businesses.

“This project recognises the significance of delivering vital infrastructure to provide a safer and more efficient road system for the South-West region of WA.

“It is important that money spent on our region with BORR stays in our region to provide further opportunities for the community and the $450 million targeted local spend is exciting for our local industry,” Collie-Preston MLA Jodie Hanns said.

BORR is being delivered in three sections, namely: 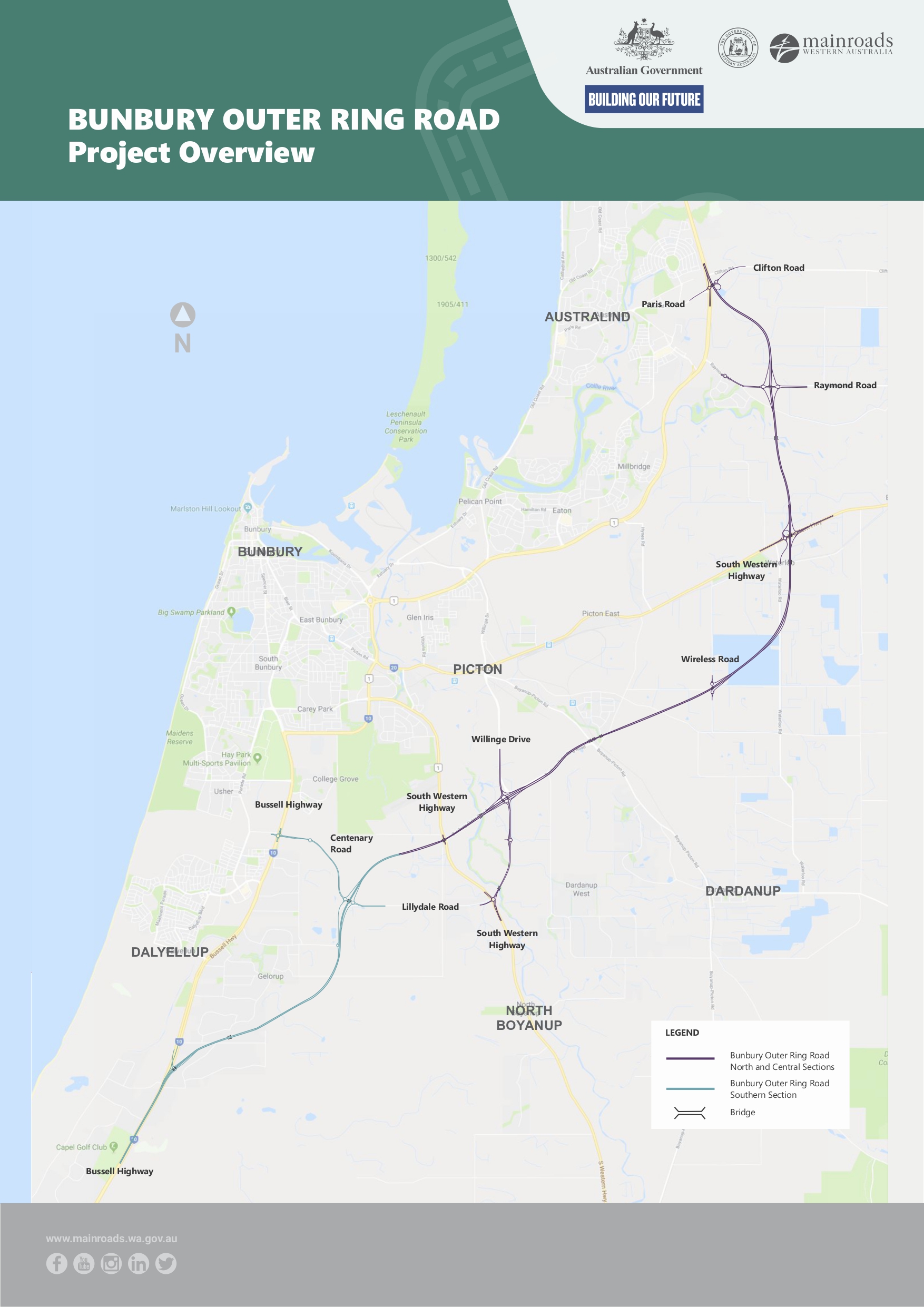 The northern section extends from Forrest Highway in the north near Australind, to the northern end of the BORR project’s first stage. Works include:

On the other hand, the Southern Section – which is still subject to environmental approvals – will extend from the southern end of the BORR project’s first stage, to Bussell Highway south of Bunbury. Works will include:

With this, the interchanges at Discovery Road and Lillydale Road are going to be built using an at-grade intersection and roundabout respectively while the existing corridor in the central section is going to be retained.

“The investment into BORR will improve safety and access for our community.

Once completed, the BORR will help improve access to Bunbury Port as well as existing and proposed industrial areas east of Bunbury by providing a new free-flowing, rural freeway-standard road.

Marble Bar Road is set for realignment and reconstruction as it passes through Coongan Gorge.

Expressions of Interest for the design and construction of the $175 million Albany Ring Road in Western Australia has been released to market, with major construction works anticipated to commence in late-2020 - subject to the granting of necessary environmental and heritage approvals.

About 58 new road safety projects are going to be fast-tracked towards delivery across the State as the Australian and Western Australian Governments commit $100 million to get these vital projects completed within the 2021-22 financial year.