A consortium comprising of Laing O’Rourke, AECOM and Kellog, Brown & Root had been awarded the design and construction contract for the $238 million Torrens Junction project in South Australia.

The successful consortium will undertake the separation of the interstate freight rail line from the Outer Harbor passenger line as well as build a rail underpass located at Park Terrace.

“This project will deliver substantial benefits for transporting freight across the country by rail, while reducing the number of heavy freight vehicles using the road network.

Mr Fletcher also stated that this upgrade will help improve the productivity of the national rail freight network by reducing delays as well as enabling about 20 per cent of longer 1,800-metre freight trains to run between Adelaide and Melbourne.

According to SA Transport and Infrastructure Minister Stephen Mullighan, the road network will also be benefitting from this project with the removal of the Park Terrace level crossing.

“About 11 freight trains a day travel through the Torrens Junction, closing the Torrens Road and Hawker Street level crossing for up to six minutes each time.

“Removing the need for freight trains to stop at Torrens Junction will also mean they don’t have to slow down or stop through the Torrens Road and Hawker Street level crossings, reducing traffic delays at these locations,” Mr Mullighan said.

A new lowered railway station at Bowden is one of the features of the Torrens Rail Junction project, and it will improve the connections to Bowden Urban Village as well as Entertainment Centre, park lands and local areas such as a new shared cycling and pedestrian path. 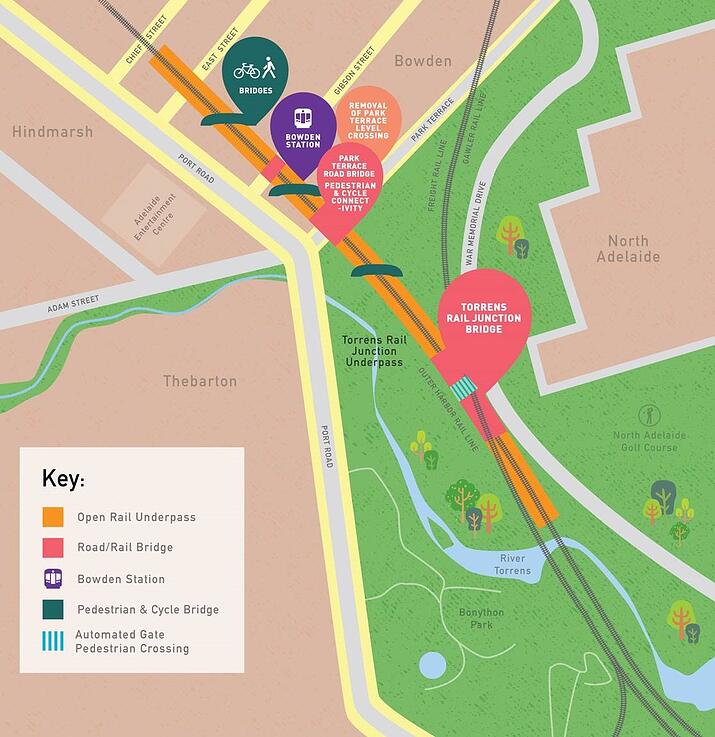 A new pedestrian and cycling overpass at Goodwood will also be included in the works, and this will complete Turtur bikeway, Adelaide’s busiest cycling route – used by about 1,000 cyclists daily.

This project – together with the Goodwood Junction project completed back in 2014 – is expected to support about 212 jobs annually during construction.

Construction is set to commence within weeks after the announcement of the successful builder.

Source: Minister for Urban Infrastructure and Premier of South Australia (1, 2)

Following the beginning of the Expressions of Interest process, South Australia’s $231 million Ovingham Level Crossing Removal Project in South Australia marks a new milestone with the announcement of a preferred design for the project.

Western Australia’s $230 million Swan River Crossings project in Fremantle is a step closer to construction following the unveiling of the new alignment that was the result of an extensive community consultation.

Major construction to remove the Reservoir level crossing in Victoria is set to commence soon and the John Holland, KBR and MTM alliance has been appointed to oversee the delivery of the $232 million project.