As part of the massive Cross River Rail development in Queensland, a new priority development area (PDA) has been identified in Woolloongabba to support the construction of a new inner-city train station in the region.

“The new PDA includes all land within the former Woolloongabba PDA as well as land east of Main Street, including the Gabba.

“The inclusion of the Gabba enables the delivery of a dedicated pedestrian connection from the new Cross River Rail station to the stadium, providing easy access on game days and for events,” Minister for State Development, Manufacturing, Infrastructure and Planning Cameron Dick said.

Minister Dick added that the new PDA precinct is going to be transformed into a vibrant mixed-use space that will connect commercial, residential as well as retail developments with world-class public transport.

“It will create a better overall Gabba experience for spectators and locals alike, and with regular train services and a direct connection between the stadium and Woolloongabba’s entertainment district it’s going to support business growth and job creation,” Minister Dick said. 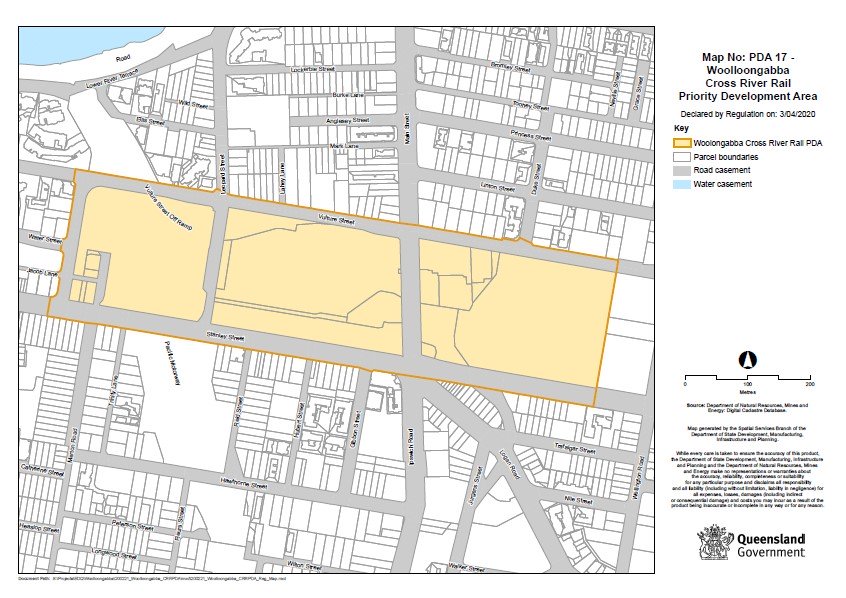 An Interim Land Use Plan is going to be in effect to help regulate development within the new PDA over an 18-month period while a development scheme is being finalised. This will also ensure the development of the new Cross River Rail station in the region remains on track.

“Over the next 18 months the Cross River Rail Delivery Authority will work closely with the state government, Brisbane City Council and the community to prepare a development scheme for the site.

“The community will then have an opportunity to comment on the Woolloongabba Cross River Rail PDA proposed development scheme when it is publicly notified,” Minister Dick said.

According to Kate Jones, Minister for Cross River Rail, the declaration of the new PDA in Woolloongabba will help increase investor confidence and certainty on the region, and it will also help bring in more development and business to the city.

“This is about getting on with the job of building Queensland’s largest infrastructure project.

“Today is a great milestone – ensuring we’re forging ahead with one of the government’s most important initiatives,” Ms Jones said.

The $5.4 billion Cross River Rail project will deliver a 10.2-kilometre rail line from Dutton Park to Bowen Hills as well as a 5.9-kilometre twin tunnels under the Brisbane River and city centre.

In addition, eight above-ground stations will be upgraded - including the station at Exhibition, which will become a year-round station that offers daily services from the RNA Showgrounds.

Last year, it was announced that three new stations will also be built in the Gold Coast as well. You can read more about it here.

Approximately 7,000 local jobs are expected to be supported by this multi-billion-dollar transport infrastructure development.

Construction works on the $53.32 million Kennedy Developmental Road Upgrade (Hann Highway) – between Mount Garnet and Hughenden – has officially commenced, which will be delivering a more reliable freight and tourist route for North Queensland. The project is also expected to create jobs for the local communities surrounding the project site.

The Townsville Ring Road development in Queensland is progressing well as four new bridges and overpasses take shape as part of the $230 million Stage 5 project.