The first sod has been turned at the Woondum interchange site and construction is now underway on the first section of the $1 billion Bruce Highway – Cooroy to Curra Section D project in Queensland, which is also known as the Gympie Bypass.

The billion-dollar project is going to be delivered under two major construction contracts, with the first contract delivering the Woondum interchange to Sandy Creek Road section; and the second contract to deliver the Sandy Creek Road to Curra section.

The first contract has been awarded the Bielby BMD Joint Venture.

“The project will reduce the number and severity of crashes and will meet current design standards to provide a safer road environment.

“We are investing in our post-pandemic future by delivering lasting infrastructure which will kick-start our economic recovery and benefit Australians for years to come,” Deputy Prime Minister and Minister for Infrastructure, Transport and Regional Development Michael McCormack said.

Through the first contract, a 12-kilometre dual-lane, divided highway will be delivered between Woondum interchange and Sandy Creek Road in Veteran. Works will include about 5.5 kilometres of local road realignments as well as upgrades to existing intersections to help reduce the number and severity of crashes in this section of road. 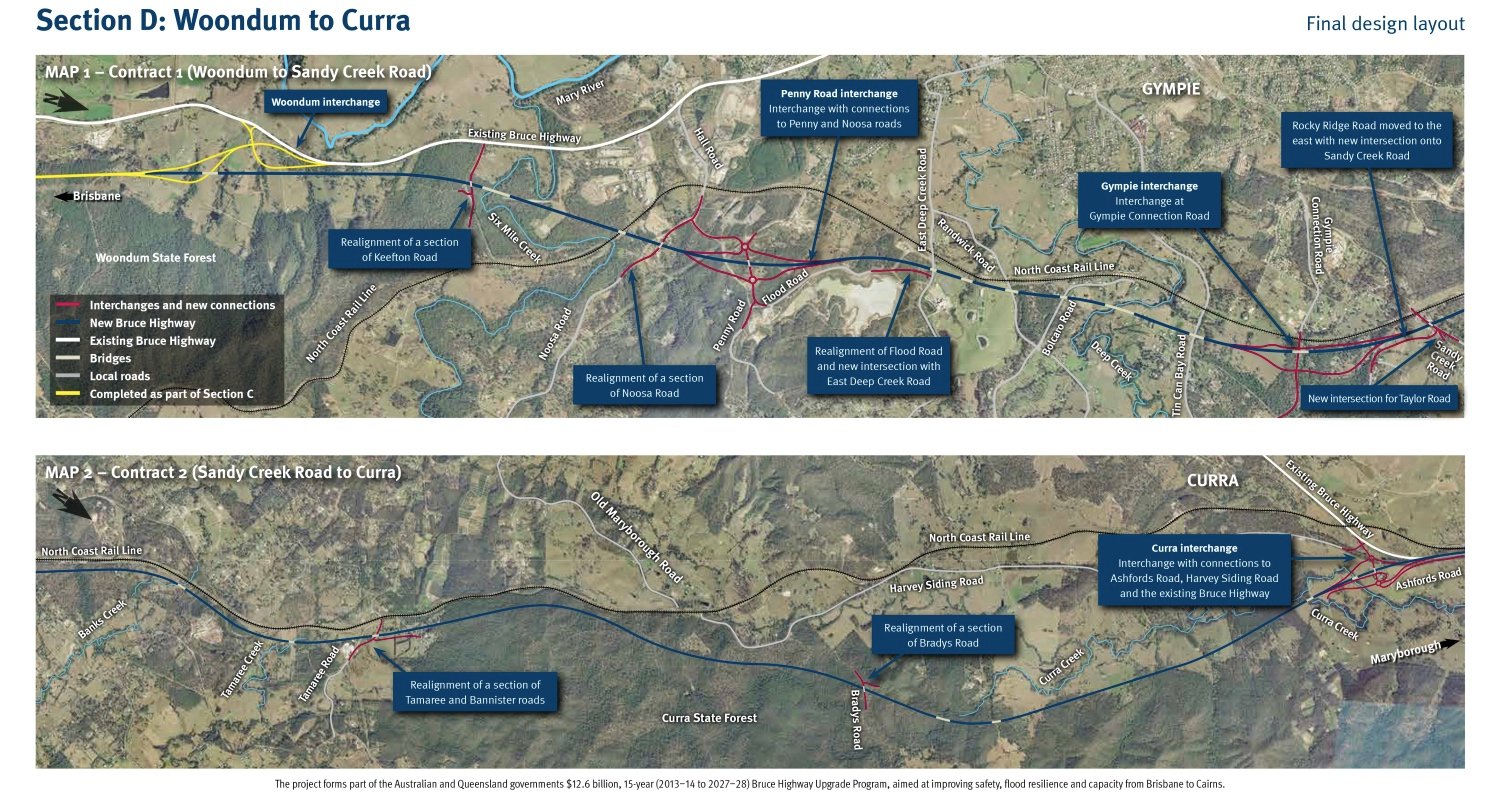 This project will also involve moving over six million cubic metres of earth from cuts to fill and raise the level of the highway so it can withstand a one-in-100-year flood.

This significant transport infrastructure project will not only improve safety, freight efficiency and connectivity on this section of road, it will also create job opportunities and economic stimulus which is part of Queensland’s plan for economic recovery.

“The Gympie Bypass will be an economic lifeblood for the region for the next four years, creating about 576 jobs – and I encourage local businesses and workers to put their hand up and get involved.

“We committed to building this now more than ever – with global economies bearing the brunt of COVID-19 – Queenslanders need jobs,” Queensland Transport and Main Roads Minister Mark Bailey said.

“We’ve seen Queenslanders step up to manage the health impacts of the global pandemic, and because of their work the Queensland Government is able to get on with the state’s plan for economic recovery.

“That includes moving six million cubic metres of earth to build a transformative road project for Gympie as part of a $1.9 billion pipeline of transport projects in the region creating more than 1,000 jobs,” Mr Bailey said.

Key features of the $1 billion project will include:

“Local motorists, tourists and heavy transport will all benefit from this four-lane divided highway that will be built to the highest possible safety standards.

“When it’s finished the new highway alignment will ease congestion through Gympie and deliver a safer, high speed, and less flood prone transport corridor that will keep the wheels of Wide Bay’s economy turning,” Federal Member for Wide Bay and Deputy Speaker of the House of Representatives Llew O’Brien said.

With the first contract now awarded and works are underway, the focus will now move towards getting the second contract awarded by early 2021.

“The second contract will undertake the remaining section between Veteran and Curra.

“Although the two contracts will start about six months apart, the ultimate goal is to have all the works complete at the same time so we can open the new section of the highway by mid-2024, weather permitting,” Mr O’Brien said.

The Bruce Highway – Cooroy to Curra Section D project is jointly funded by the Australian and Queensland Governments on an 80:20 basis, with the Australian Government contributing $800 million.

With early works ramping up at the site of Albemarle’s $ 1 billion Kemerton lithium project, BGC Contracting has announced that it is undertaking the earthworks which commenced in January of this year. This is the company’s first venture into the “Lithium Valley” of Western Australia.