The Albany Ring Road in Western Australia is close to completion and providing a free-flowing link between Albany Highway and Princess Royal Drive as works get underway on the remaining section of the project.

“The Albany Ring Road will improve connections between major freight infrastructure, including airports and commercial and industrial areas, which will help industries grow and support more jobs.

“This will drive new and expanded economic opportunities in the local area and beyond,” Deputy Prime Minister and Minister for Infrastructure, Transport and Regional Development Barnaby Joyce said.

The Albany Ring Road is an 11-kilometre stretch of road that will help improve freight efficiency and reduce congestion on existing routes. It is also the largest infrastructure project delivered in the Great Southern region.

The first stage of the project is due to open to traffic in April of this year.

“When complete, the Albany Ring Road will take heavy vehicles away from the town centre, better support local businesses and improve commute times through the city.

“It will provide certainty for Albany Port users and open up new economic opportunities to the north and west of the city, while also taking heavy vehicles out of residential areas and away from the centre of town,” WA Transport Minister Rita Saffioti said.

The route for Albany Ring Road will extend south from Menang Drive and Albany Highway intersection and parallel to Link Road until it connects to Princess Royal Drive.

The new road is being built around the City of Albany and will link to existing roads, improving access to Mirambeena Strategic Industrial Area. 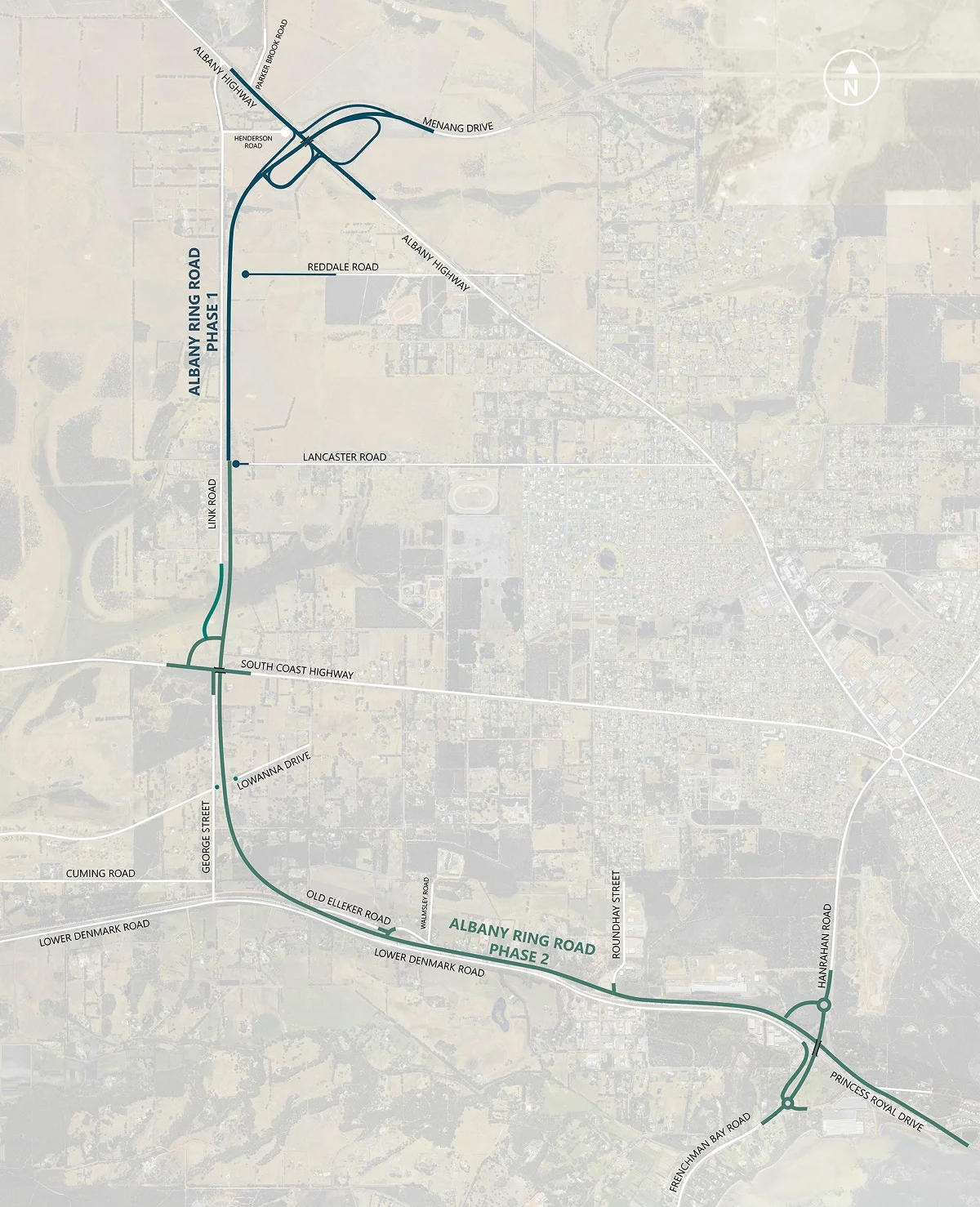 The $175 million project is delivered in two phases:

“Every time I drive past the site, it is a hive of activity.

“I am so pleased we are close to the opening of Phase 1, and that Phase 2 of the project is now getting off the ground, generating new jobs and contracting opportunities for local businesses,” State Member for Albany Rebecca Stephens said.

Pre-construction works have been ongoing over the past month to pave the way for upcoming earthworks and bridge works. This included the installation of new fencing, seed collection, topsoil removal, relocation of utilities and services protection works.

Works on the first grade-separated interchange in the Great Southern Region – at Menang Drive and Albany Highway – are progressing well and the bridge as well as road ramps are anticipated to open next month.

To access Albany Highway, vehicles heading north from the Menang Drive intersection need to cross over the new bridge and use a new loop ramp.

According to Federal Member for O’Connor Rick Wilson, the Albany Ring Road complements other projects being delivered in the region.

“The Australian Government has committed more than $17.7 billion for transport infrastructure funding across Western Australia since 2013.

“The Australian Government will continue to invest in and deliver the infrastructure projects that matter to locals, tourists and businesses across regional Western Australia,” Mr Wilson said.

The $175 million Albany Ring Road projects is jointly funded by the Australian and Western Australian Governments, each contributing $140 million and $35 million respectively.

Construction begins on the $175m Thompsons Road Upgrade in VIC

Construction has commenced on the $175 million Thompson Road Upgrade in South East Melbourne, with BMD Constructions Pty Ltd as the preferred builder to deliver the works on Stage One of the project.

Civmec has announced that it has recently secured a number of contracts with a combined value of $175 million for works in the resources industry.