Early works are now underway on the Tonkin Gap project in Western Australia, with major construction expected to ramp up over the coming months.

Groundworks have commenced on the northern section of the project and this includes enabling works for the Morley-Ellenbrook Line, in the median of Tonkin Highway as well as underneath the Reid Highway and Tonkin Highway interchange.

Trains running from the new Bayswater Station and down the middle of Tonkin Highway will be able to enter Tonkin Highway and then exit before the new Malaga Station through two new underpasses with dive structures – which are currently under construction as part of the project’s enabling works for the METRONET Morley-Ellenbrook Line.

Other associated works include new road and bus bridges built at Broun Avenue, including a bus interchange station, which will provide access to the future Morley Station.

Works will also be commencing soon on the southern end of the Tonkin Gap project to help bust congestion on the Tonkin Highway between Morley and Redcliffe – one of Perth’s most congested roads.

These works have been fast tracked to help support the State’s economic recovery from COVID-19.

“The start of these works signal the beginning of the next infrastructure transformation in the north eastern suburbs, after the success of the Tonkin Highway extension and Reid Highway works.

“This year alone we have seven METRONET projects underway and through our Building for Tomorrow program, we are creating lasting infrastructure for generations to come,” Premier Mark McGowan said. 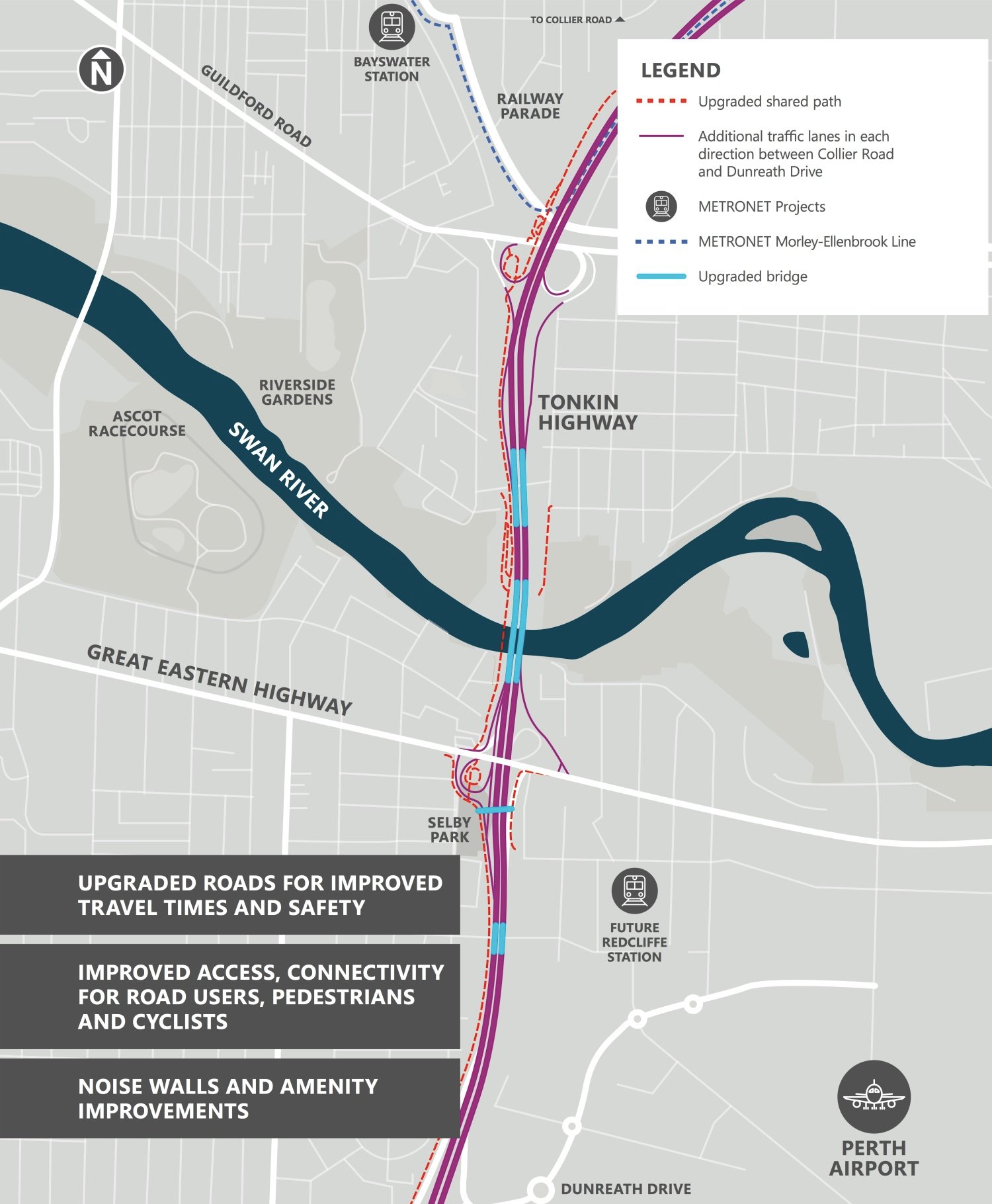 “Not only is this critical infrastructure that the Morrison Government has prioritised, it also means thousands of jobs for hard working West Australians.

“It’s crucial that we support the WA economy as we come out the other side of COVID and fast-tracking projects like the Tonkin Highway Gap is part of our plan,” Federal Minister for Population, Cities and Urban Infrastructure Alan Tudge said.

Just last month, the main construction contract for the METRONET Morley-Ellenbrook Line was awarded to the MELconnx Consortium comprising of Laing O’Rourke Australia Construction. You can read more about the contract award here.

“We now have workers on the ground starting the vital enabling works for the train to travel down Tonkin Highway to Ellenbrook – just like we promised.

“There will be significant traffic management and inconvenience over the coming years however doing the enabling works and highway upgrades under one contract will mean less disruption further down the track. I thank everyone in advance for their patience,” Transport Minister Rita Saffioti said.

The preliminary concept for the Tonkin Gap project will include:

“The Morrison Government is providing record amount of funding to infrastructure projects in Swan.

“In addition, the commencement of these works are essential to our economic recovery here in WA,” Federal Member for Swan Steve Irons said.

The Tonkin Gap project is going to be built by the Tonkin Gap Alliance, which is comprised of BMD, Georgiou Group, WA Limestone, BG&E and GHD.

A new major milestone has been marked on the $1 billion M1 Pacific Motorway Varsity Lakes to Tugun upgrade (VL2T) on the Gold Coast with the appointment of Seymour Whyte to undertake Package C of the project.

$31.6 million worth of upgrades is getting underway to fix a 1.5-kilometre section of the Proserpine-Shute Harbour Road in Cannonvale, Queensland.