Following the release of the Business Case and announcement of a new station last month, works are now underway at Keilor East – the location of the new station – and this signals the beginning of a major program of initial and early works on the new Melbourne Airport rail line.

The new Melbourne Airport Rail is being delivered as part of Victoria’s massive Suburban Rail Loop development that will connect every major suburban and regional line to Melbourne Airport.

“The Suburban Rail Loop will change the way our whole state moves, connecting every major suburban and regional rail line to Melbourne Airport.

“Only Labor will keep doing what matters – and only Labor will deliver the public transport we need to take cars off the roads and get Victorians home safer and sooner,” Premier Daniel Andrews said.

The Australian and Victorian Governments have committed $5 billion each towards the delivery of the Melbourne Airport Rail – also known as SRL Airport.

The Labor Government has also invested $143 million to deliver the first stage of the Sunshine Precinct Masterplan, with the Station Place package to deliver enhancements to the Sunshine Station as well as a new bus interchange, shared vehicle and pedestrian pavements, more open space and the creation of future development sites to make it easier to deliver more works under the masterplan in the years to come to accommodate the growing community.

“Getting started on this much-needed upgrade to Sunshine Station and Station Place comes on top of a brand-new station at Tarneit West, an overhaul of Albion Station and planning for a station at Truganina – creating jobs, supporting local businesses and getting passengers home safer and sooner,” Member for Tarneit Sarah Connolly said.

“The Sunshine Station upgrade will give the entire precinct a facelift, with modern facilities and better access bringing this busy local hub up to the standard commuters in Melbourne’s west expected and deserve,” Member for St Albans Natalie Suleyman said.

The first tranche of works on the Airport rail line project will include the removal and relocation of six AusNet electricity transmission towers between the Western Ring Road (M80) and the existing Albion-Jacana freight corridor.

New towers will be put in place to create space for a new rail bridge over the Western Ring Road, enabling the movement of trains to the airport every 10 minutes as well as connecting over 150,000 passengers in the City of Moonee Valley to the State’s expanding rail network for the first time with a brand-new Keilor East Station.

Relocating the AusNet towers is going to be carried out along with a broader early works package that will move about 250 key utilities such as powerlines, gas mains, communications equipment, and sewer and water supplies.

The Melbourne Airport Rail project will include: 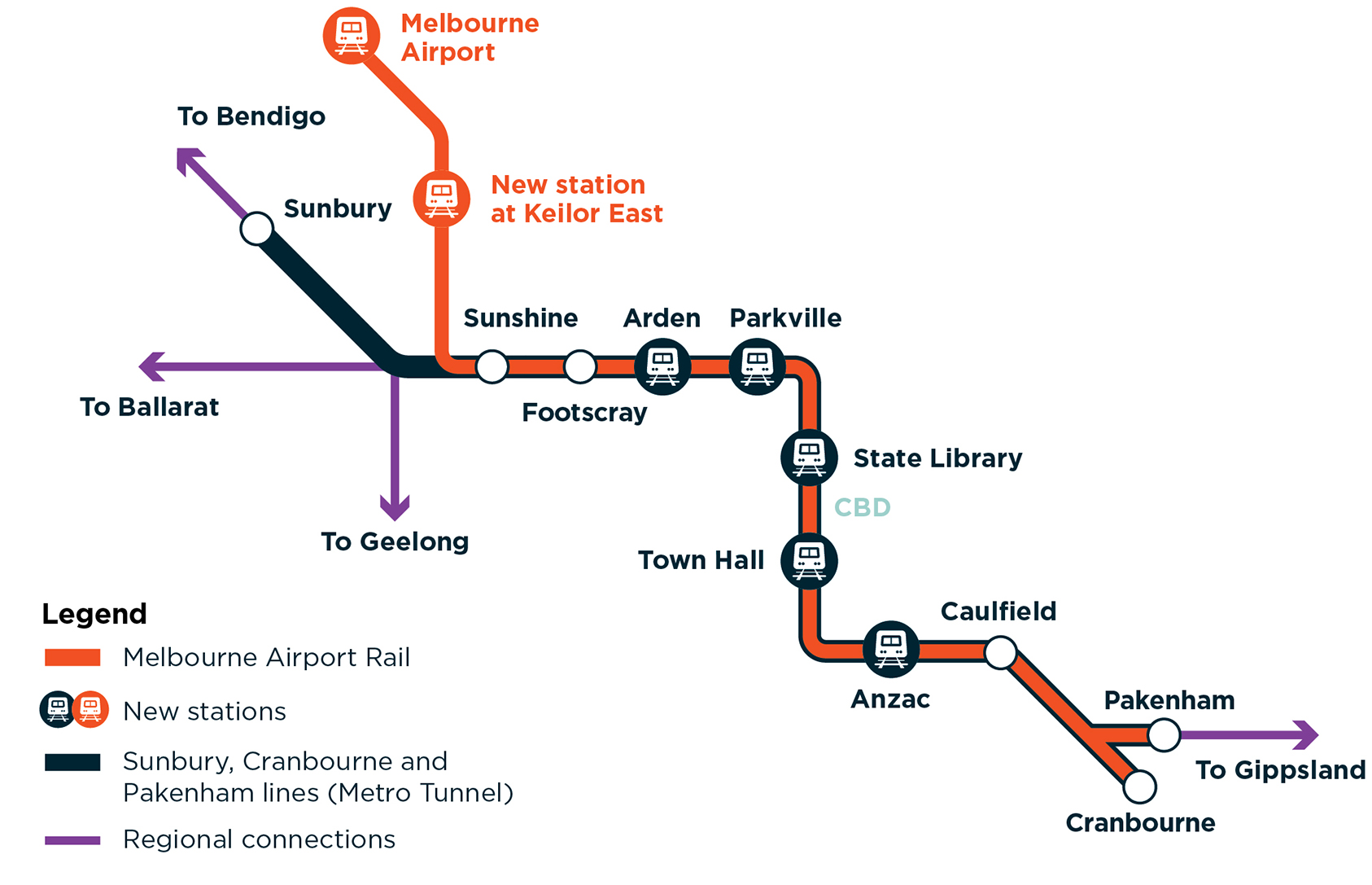 The consortium comprising of FCC Construction Australia, Winslow Infrastructure and McConnell Dowell has been chosen as the preferred builder to undertake the delivery of key components of the project, including the twin track rail bridge over the Maribyrnong River.

The new rail bridge will rise over 50 metres above the river valley at its highest point, which makes it the second highest bridge in Victoria next to the West Gate Bridge.

On the other hand, the consortium between John Holland, CPB Constructions, KBR and AECOM was selected as the preferred contractor for the Sunshine Systems Alliance works that includes the transformation of the Sunshine Station, rebuilding of the Albion Station and the delivery of twin tracks between Sunshine and the Albion-Jacana corridor along with the elevated rail bridge.

These initial and early works will pave the way for major construction to begin next year, minimising the impact to residents and businesses.

Once completed, the Melbourne Airport Rail will get passengers from the CBD to the airport in just around 30 minutes.

Over 30 stations across Melbourne will have a direct connection to Melbourne Airport via the Metro Tunnel and most passengers coming from other stations in Victoria will only need to change trains once to get to the airport.

The Melbourne Airport Rail is anticipated to support up to 8,000 direct and indirect jobs during its construction.

The development of the massive Sydney Metro project is well underway, with six companies shortlisted for two major contracts – delivery of the Victoria Cross Station and Metro line-wide works.

Early works have begun on the new Roma Hospital in Queensland

Work has begun on the $70 million new Roma Hospital, beginning with two early works packages. Early works include the full program of pathology refurbishment and relocation, with works expected to be completed by mid-December 2016.