Queensland Minister for Main Roads and Road Safety Mark Bailey announced that the state government has finalised the construction plan and route for the Mackay Ring Road Stage 1 on Bruce Highway.

“I’m pleased to advise that the early works can begin in the coming weeks which include the relocation of services, earthworks and the realignment of local roads,” said Minister Bailey.

Early works for this project will commence in a few weeks, ahead of major construction which is set to begin in 2017.

According to member for Mackay Julieanne Gilbert, the Mackay Ring Road project is the biggest project undertaken in the Mackay and Whitsunday region by the Queensland Department of Transport and Main Roads. 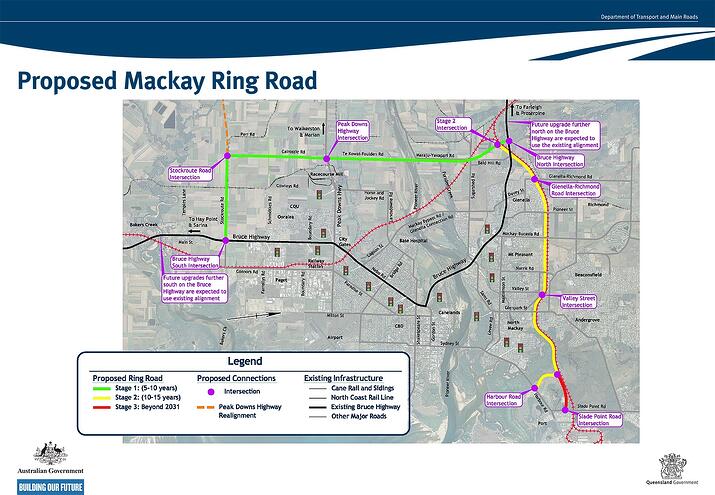 The project will take at least three years to complete and create an average of 603 jobs during the construction phase.

Member for Mirani Jim Pearce reported the project will provide a safer and more efficient road network for motorists by rerouting heavy vehicles through Mackay from the urban section of the Bruce Highway.

“The new road will improve safety for residents by taking heavy vehicles travelling along the Bruce Highway off local streets.

“It will also reduce travel times for inter-regional trips and freight vehicles and address the traffic congestion and accident risks of the existing route," said Mr Pearce.

The Australian Government has committed up to $448 million to the Bruce Highway—Mackay Ring Road—Stage 1 project, with the Queensland Government committing up to $117 million.

Subscribe to Felix Project News today and stay up to date with the latest industry news and project updates.

Source: Queensland Government and Minister for Infrastructure and Transport

Following the beginning of the Expressions of Interest process earlier this year, early works are now underway to prepare for major construction in late 2020 on the $662.5 million Bruce Highway Upgrade between Caboolture and the Sunshine Coast.

Another Bruce Highway upgrade in Queensland is one step closer to commencing works as contracts are being advertised for the construction of the $662.5 million upgrade project between Caboolture-Bribie Island Road and Steve Irwin Way (Exit 163).

Construction on the $662.5 million Bruce Highway upgrade between Caboolture-Bribie Island Road and Stever Irwin Way (Exit 163) in Queensland is due to begin before Christmas, bringing a much needed boost to the Sunshine Coast’s economic recovery.