The opening of the tunnel pushes Japan's 53.9km Seikan rail tunnel into second place, and the 50.0km Channel Tunnel linking the UK and France into third. Australia’s longest tunnel (which is still under constrcution) will sit at 15km, reaching only a quarter of the length of Switzerland's development.

The project, which cost over $12b, was delivered on time and within budget and provides a high-speed rail link under the Swiss Alps between northern and southern Europe at speeds of up to 250km/h. The tunnel creates a mainline rail connection between Rotterdam in the Netherlands and Genoa in Italy. 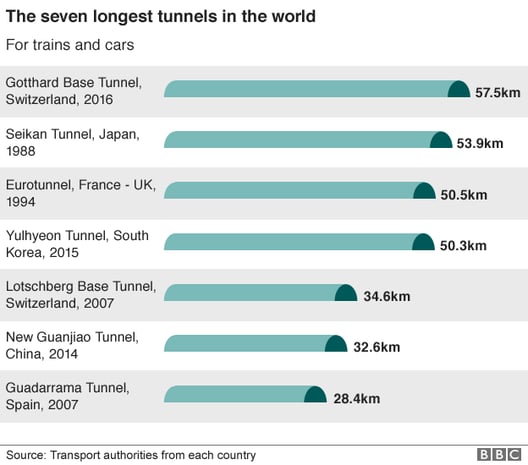 Taking the title of 'world's longest and deepest tunnel' is cool and everything, but what is really noteworthy is the incredible construction and engineering efforts that were necessary to get to this point. It's exciting projects like this that encourages creativity and innovation on a global level and keep the industry motivated to achieve great things.

The completed tunnel travels up to 2.3km below the surface of the Swiss Alps and through rock that reaches temperatures of 46C. Engineers had to dig and blast through 73 different kinds of rock, some as hard as granite and others as soft as sugar. More than 28 tonnes of rock was excavated - this is more than it would take to build 6 Egyption Pyramids. The rock was then broken down to help make the concrete used to build the tunnel.

To put the impact of the Gotthard tunnel in perspective, when full services begin in December, the journey time for travellers between Zurich and Milan will be reduced by a full hour. It is expected that 260 freight trains and 65 passenger trains will pass through the tunnel each day in a journey taking as little as 17 minutes. 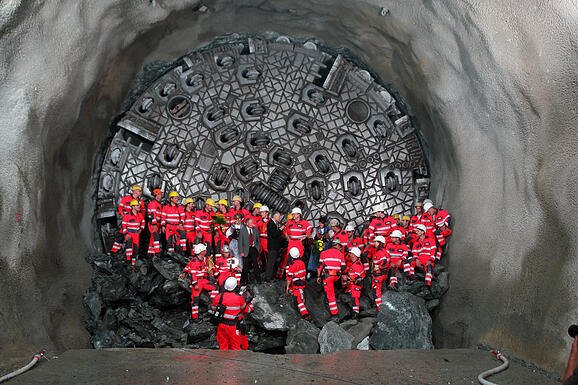 Such a reduction is impressive by any standards, and is attributable to the tunnel following a flat and straight course, instead of winding up through the mountain like the old rail and road tunnels.

The Gotthard tunnel is not only a giant step for Switzerland, but the entire European Union. The economic benefits that stem from easier movement of goods and increased tourism will be felt across the continent. It also serves to protect the Alpine environment - a million lorries travel through the Alps per year and they will now be able to go off the road, onto rail and into tunnels like this.

Keep up to date with projects in Australia and beyond by subscribing to Felix Project News.

Rox Resources has found a 58-million-tonne ore body in the Northern Territory's Gulf of Carpentaria, comprised of 12.7% lead and zinc combined, 11.1% zinc and 1.6% lead. The drill site, 'Teena', is near Borroloola and just 10km from Glencore's McArthur River mine.

24 of the world's most eye-wateringly over budget projects

The ultimate achievement for any construction company is to be able to report that the project came in on-time and on-budget. Learn the difference between a streamlined procurement method and the delays that can result in infamy.

Atlas Copco has set a new benchmark in operator safety with the launch of the newest zero-emissions underground loader, the Scooptram ST7 Battery.