ENGIE, along with its development partner Yara Pilbara Fertiliser (Yara Australia), has announced Final Investment Decision (FID) for the Yuri Project, taking this new renewable hydrogen project in Western Australia a step closer to being built.

“Today’s announcement from ENGIE and Yara Pilbara Fertilisers that they have reached a positive final investment decision for the Yuri Project is an important milestone for WA’s growing renewable hydrogen industry.

“Yara Pilbara Fertilisers is a world-scale facility, and the project will demonstrate WA’s ability to produce renewable hydrogen on an industrial scale.

“The Yuri Project is a real example of how renewable hydrogen can be harnesses to reduce the emissions of carbon intensive sectors, and across global economies,” Hydrogen Industry Minister Alannah MacTiernan said.

The Yuri Project will include the delivery of a processing plant comprised of a 10MW electrolyser that is powered by an 18MW solar PV resource and supported by an 8MW battery energy storage system. The plant will produce renewable hydrogen to be supplied to Yara Australia’s liquid ammonia facility at Karratha.

In addition to the FID, ENGIE has also signed a purchase agreement with Mitsui & Co to acquire a 28 per cent stake in the Yuri Project. Both ENGIE and Mitsui intend to operate the Yuri Project under this agreement.

“I have been working with Yara for a very long time to get this project up and running.

“This is an important milestone for the Yuri Project, kick-starting a new renewable hydrogen industry on the Burrup.

“The McGowan Government is committed to diversifying the Pilbara economy and creating local jobs, and this emerging industry will offer a big boost to our region,” Pilbara MLA Kevin Michel said. 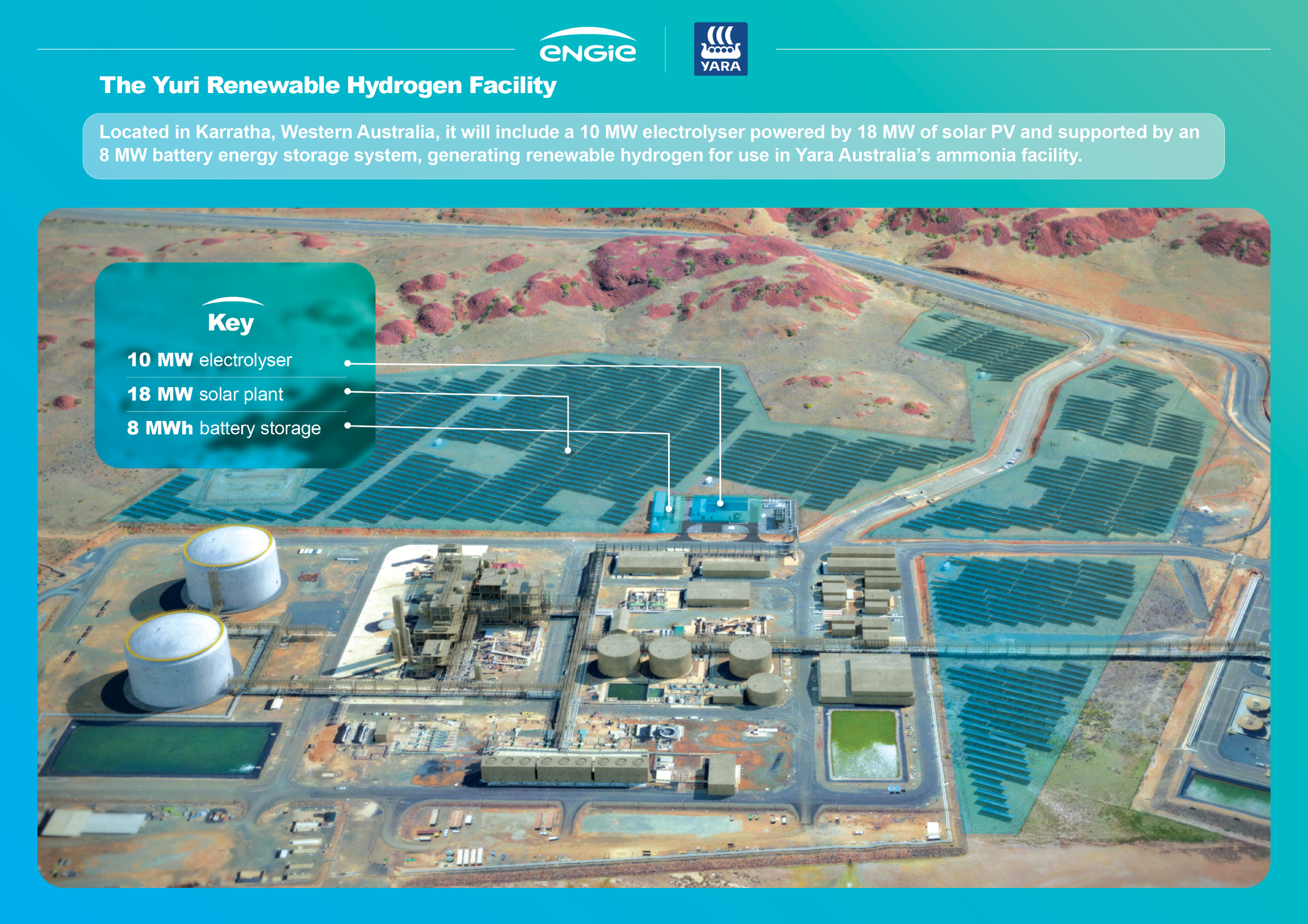 Once up and running, the Yuri Project is set to be one of the largest renewable energy-powered electrolysis facilities in the world with a production capacity of up to 640 tonnes of renewable hydrogen annually.

Yara Australia’s facility is going to be “one of the first established operational facilities in the world” to be supplied with and utilise green hydrogen molecules to produce green ammonia, which will be exported worldwide.

The engineering, procurement, construction and commissioning contract for the Yuri Project has been awarded to the consortium comprised of Technip Energies and Monford Group.

“I am delighted to see the Yuri Project moving forward very concretely as it fully illustrates one of the pillars of ENGIE’s hydrogen roadmap: industrial decarbonisation. Thanks to Australian authorities, we pave the way for hydrogen market development worldwide,” ENGIE Executive Vice President for Thermal Generation, Hydrogen and Energy Supply Activities Sebastien Arbola said.

“We have a strong pipeline of renewables, storage and hydrogen projects in Australia; as each one of these projects reaches financial close, construction and commissioning, we get closer to decarbonising our economy and realising our ambitious net zero targets,” ENGIE Australia & New Zealand Chief Executive Officer Andrew Hyland said.

The Australian and Western Australian Governments recognise the potential of this project and both levels of government have shown their support.

We highlight your great work. You get more business.

Our goal here at PlantMiner is to show off your business to our more than 15,000 thousand hirers so you can spend more time doing what you love and less time worrying about where that next job is going to come from.

Queensland is all too familiar with the impact of Summer storms on infrastructure and aware of the inconveniences which may result. The commissioning of this $170 million road project is aimed at reducing this inconvenience and eliminating the chances of road flooding. The Bruce highway is prone to being cut off by severe weather in the Yeppen Floodplain. This results in an inconvenience to motorists and negatively impacts the economy due to interrupting industry transportation.

For the first time in five years, Gina Rinehart is no longer Australia's richest person. And in a perfect analogy for the property boom taking over the mining boom as the key driver of Australia's economy, the list is now topped by apartment developer Harry Triguboff.