The Victorian Government has given the green light to Crown Melbourne and Schiavello Group’s $1.75 billion Southbank development, showing another sign of confidence in the State’s growing economy.

“This is a bold transformation of Melbourne’s skyline that will build on our state’s reputation as the nation’s leader for tourism,” said Premier Daniel Andrews.

The development on the site of the old Queensbridge Hotel in Southbank is a 90-storey, six-star hotel which will feature 388 hotel rooms, visitor attractions and 708 residential apartments.

The project is expected to create up to 3,000 direct and indirect jobs during the construction phase, which will include positions for apprentices who are trying to complete their training. A further 1,000 jobs will also be supported once the hotel is operational.

“Four thousand jobs will be created by this project in yet another sign of confidence in Victoria as the state of momentum,” The Premier said. 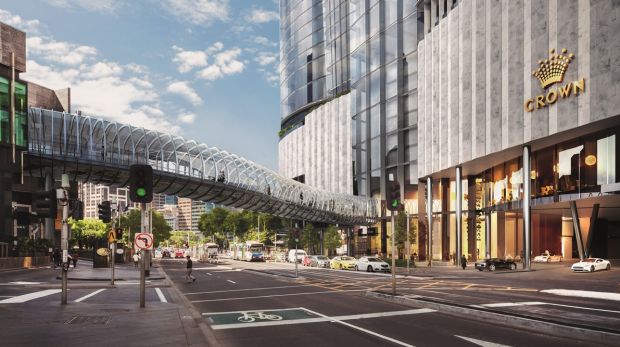 Artist impression - street level of the development (source: The Age)

With this project, an estimated $2.1 billion in economic benefits is expected to be injected into the State.

The Victorian Government has taken the necessary steps to ensure that the project developers – Crown and Schiavello – give back to the State, with a community benefits package worth $100 million. The package will include:

“This is a great outcome for Victoria. It’s jobs and economic windfall for the state, and the community benefits package will be great news for this iconic part of Melbourne.

“We get things done in Victoria – that’s why businesses have the confidence to invest here, helping to create thousands of jobs,” said Minister for Planning Richard Wynne.

Construction on the WilkinsonEyre-designed development is hoped to commence in 2018, taking approximately six years to complete.

Get the latest industry news and project updates straight to your inbox by subscribing to the PlantMiner newsletter today.

Source: Premier of Victoria, The Age and ABC News

Monadelphous secures $120m worth of work packages in WA and NSW

Monadelphous Group has recently secured a number of contracts with a combined value of $120 million from various clients, including Fortescue Metals Group, BHP Billiton and Chevron.

Monadelphous Group has been awarded a major construction contract valued at $108 million for BHP’s South Flank operations in Western Australia’s Pilbara region. Monadelphous is set to commence work under this contract immediately.

Monadelphous secures $150m worth of work contracts in resources sector

Monadelphous Group is growing their order book for this year as the company secures various work contracts in the resources and energy sectors with a combined value of about $150 million.