This significant project will create thousands of jobs and provide a long-term economic boost to the New South Wales and Western Sydney economies as the State recovers from the current pandemic.

“This new Metro and the new airport will deliver billions of dollars and thousands of jobs to Western Sydney, while establishing the infrastructure needed now and into the future.

“Getting work started on this project and many other infrastructure projects across New South Wales and Australia is critical to my government’s JobMaker program as we rebuild the economy during COVID-19,” Prime Minister Scott Morrison said.

The Sydney Metro airport rail line is going to be delivered in time for the opening of the new Western Sydney International (Nancy-Bird Walton) Airport in 2026, and it will be servicing the greater Western Sydney region.

This project is also a key part of the State’s significant $100 billion infrastructure pipeline.

“Now more than ever we need project that provide jobs to support families and this project is major economic stimulus right in the heart of Western Sydney.

“The opportunities this mega project will provide are vital as our economy recovers from the financial impact of the COVID-19,” NSW Premier Gladys Berejiklian said. 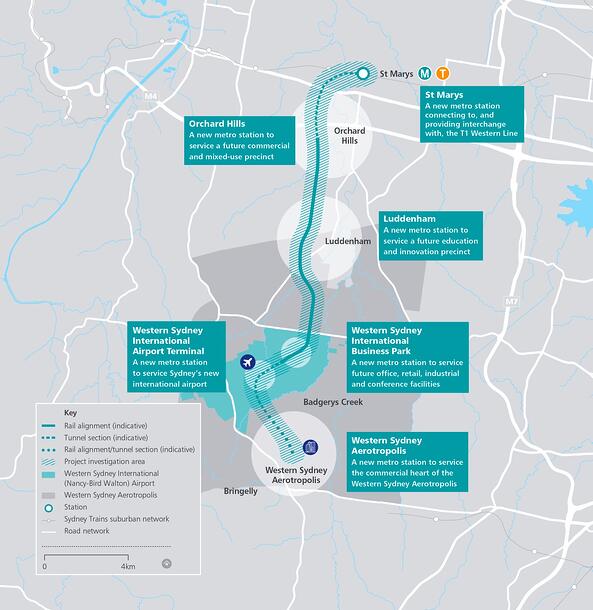 “This project will support 14,000 jobs, bringing new opportunities for the people of Western Sydney, closer to home.

Support for the development of the new airport at Badgerys Creek and Aerotropolis is a vital part of the Western Sydney City Deal – which is a 20-year agreement signed by the Commonwealth and NSW Governments as well as eight Western Sydney councils in March 2018.

“The Metro Western Sydney Airport project will be a game-changer for the region, providing the backbone for the economic and broader development,” NSW Minister for Jobs, Investment, Tourism and Western Sydney Stuart Ayres said.

“This new metro railway line will become the transport spine for the region, connecting travellers from the new airport to the rest of Sydney’s public transport system,” NSW Transport Minister Andrew Constance said.

The Sydney Metro – Western Sydney Airport is jointly funded by the Australian and New South Wales Governments on an equal basis under the Western Sydney City Deal.