The Greater Parramatta region will be seeing a new light rail which will ensure that commuters are able to easily travel to their jobs, homes and universities as well as to entertainment hubs, leisure areas and sport venues. The New South Wales Government has allocated approximately $1 billion to the project, with funding coming from the Restart NSW and Rebuilding NSW funds.

“This is a project that will not just connect major parts of Greater Parramatta but also revitalise communities and help create new ones.

“We’ve done the important planning work and are please we can unveil the preferred route and proposed stops, which we will now refine in consultation with the community,” Premier Gladys Berejiklian said.

The preferred route for the first stage of Parramatta Light Rail has been unveiled and it will be joining Westmead to Parramatta and Carlingford via Camellia. The 12-kilometre line will have potential stops at the following areas:

According to Minister for Transport and Infrastructure Andrew Constance, the 16 proposed stops will be operational from early morning to late at night, with a train servicing commuters every seven and a half minutes throughout the day.

“Customers won’t have to wait long for a service, they’ll tap on with Opal and board with ease and comfort.

“There’ll also be extra services for special events and we are planning for the system as a whole to be capable of carrying 10,000 people an hour,” the Minister said. 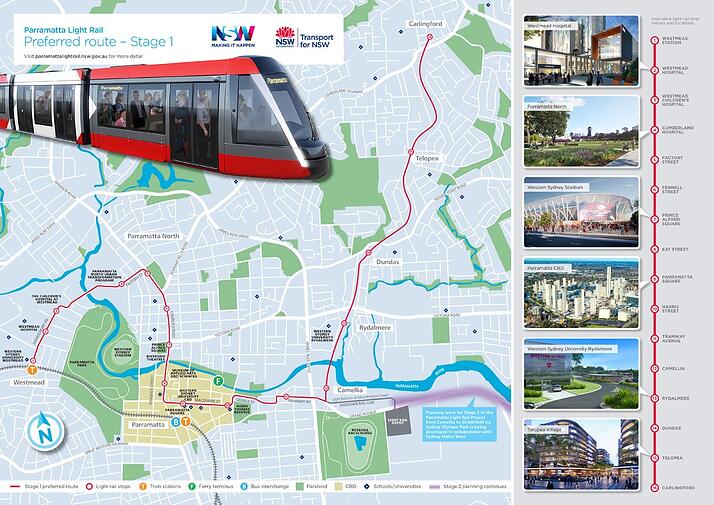 The first stage of the new network will be connecting major health precincts at Westmead to the three campuses of Western Sydney University as well as to Parramatta North, the new revitalised places in the Parramatta CBD, upgraded schools, Rosehill Racecourse and the new Western Sydney Stadium.

Planning for the second stage of the project – from Camellia to Strathfield via Sydney Olympic Park – is currently being developed in collaboration with Sydney Metro West. Planning work for stage two is expected to be finalised by the end of 2017.

The project is currently undergoing continued work to progress the business case which, following the next phase of community consultation, will be further advanced once the location of the stops have been confirmed.

“Residents, workers, businesses and the broader community are encouraged to continue playing a part in shaping how both the light rail and their neighbourhoods will look, not just today or in five years’ time, but for future generations,” Mr Constance said.

Want to get involved in the planning process of the Parramatta Light Rail? Have your say here.

Watch this space for updates on this project by subscribing to Felix Project News today.

A major contract has been awarded by the Australian and Australian Capital Territory Governments as part of the overall Canberra Light Rail Stage 2A project that will extend the light rail from Alinga Street to Commonwealth Park.