The $55 million Gawler East Link Road (GELR) project has been given the green light. The new road will be linking Main North Road to residential developments located east of Gawler in South Australia.

The new road will cater to upcoming residential developments in Gawler East, Gawler South, and Evanston Park. GELR will also be providing an alternate route for Gawler East residents to access Main North Road which will help reduce traffic through Gawler town centre.

“The Gawler East Link Road is a significant piece of transport infrastructure for part of northern Adelaide which is experiencing significant residential growth. It will reduce the impact of increased traffic volumes on the Gawler town centre generated by the thousands of new houses expected to be built in Gawler East and beyond,” said Transport and Infrastructure Minister Stephen Mullighan.

The project will involve upgrading the Main North Road intersection with Potts and Para roads as well as an upgrade to Potts Road, and construction of a bridge over the South Para River. New traffic signals will also be included in the project. 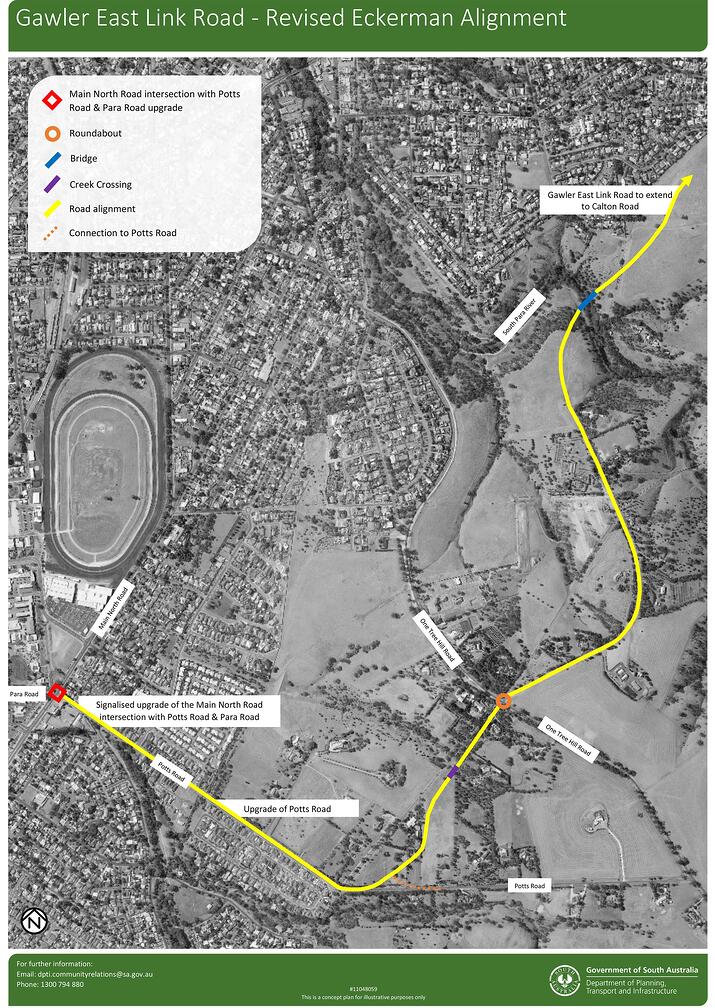 The South Australian Government has been working together with the Gawler council as well as local developer Springwood Communities and local MP Tony Piccolo in order to identify the road alignment which will create a link between Calton Road and Main North Road.

“We are very pleased to have worked collaboratively and successfully with the State Government and Council to facilitate the delivery of this key infrastructure project for Gawler and the north of Adelaide.

“As the largest developer in the area, Springwood Communities is fully supportive of making a substantial commitment to construction of the road, and we are particularly appreciative of the Minister’s commitment to the region,” said Springwood Project Director Warwick Mittiga.

The next stage for this project will be to develop the concept design, which will be up for further consultation with the local community.

Request for tenders for the project’s main construction contract will be released later in 2017. Major construction works are expected to begin in early 2018, with completion set for 2019.

Construction of the GELR is expected to support up to 110 construction jobs.

Want to receive the latest industry news and project updates straight to your inbox? Subscribe to the PlantMiner newsletter today.

Construction is now underway on the electrification and modernisation of South Australia’s Gawler Rail Line and the $615 million project is anticipated to deliver up to 250 jobs a year during the delivery phase.

The contract to design and build the $55 million Gawler East Link Road (GELR) in South Australia has been awarded to local company Bardavcol, and detailed design works are set to commence shortly.