The Gold Road-Gold Fields / Gruyere joint venture has appointed APA Group to build a new gas transmission pipeline and gas-fired station which will supply power to the Gruyere Gold Project, as part of a 15-year $585 million contract.

APA Group will design, construct, own and operate the 198-kilometre pipeline as well as the 45MW gas-fired power station. The new pipeline and power station will be called Yamarna Gas Pipeline and Yamarna Power Station respectively – located in the Yamarna greenstone belt of WA, 200 kilometres north-east of Laverton.

The company will also invest approximately $180 million in the project, which will be recovered over 15 years through a gas transportation and electricity supply agreement. 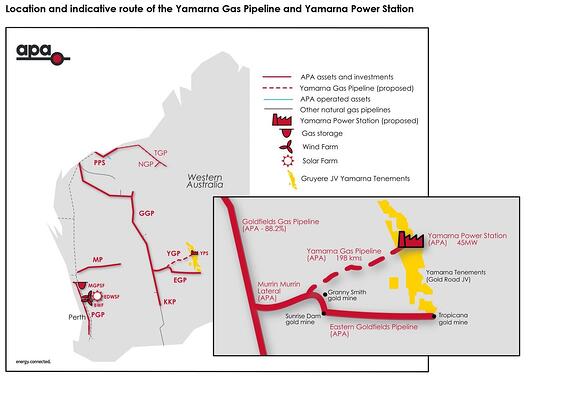 Commissioning of the project is expected by late 2018 which aligns to the Gruyere joint venture’s plans to begin production by early 2019.

APA Group’s Chief Executive Officer and Managing Director Mick McCormack said that this agreement is a compelling solution for the joint venture.

“We built and commissioned the Eastern Goldfields Pipeline 18 months ago, and the Gruyere JV will be the third customer to take advantage of our interconnected pipelines in this region to provide a safe and reliable energy solution – as an infrastructure owner, you want to see your assets worked hard,” Mr McCormack said.

The $507 million Gruyere Gold Project north-east of Laverton in Western Australia has been given environmental approval by WA Environment Minister Albert Jacob and the project’s developers – a joint venture between Australia’s Gold Road Resources and South Africa’s Gold Fields – are expecting to gain final approvals in February 2017.

The Western Australian Government Department of Water and Environment Regulation has granted a works permit to Hastings Technology Metals for the construction of the Yangibana rare earths process plant in the upper Gascoyne region.

The $507 million Gruyere Gold Mine project has been given the final mining approval by the Western Australian Department of Mines and Petroleum (DMP). The gold mine development 200-kilometres east of Laverton is a 50:50 joint venture project by Gold Road Resources and Gold Fields.