Construction has commenced on Brisbane’s first new inner city state secondary school to be built after more than five decades. The new college is being delivered as part of the Queensland Government’s Building Future Schools Fund.

“Construction is starting on the first school being built in Brisbane’s inner city in more than 50 years, this is an historic moment.

In addition to the beginning of construction, Hutchinson Builders was also awarded the contract to build the new school that’s located at the site of the former Fortitude Valley State School at the corner of St Paul’s Terrace and Brookes Street.

Scott Hutchinson, the company’s Chairman said: “We’re thrilled to have been appointed as the builder for this milestone development. Schools have always been a big part of what we do.”

Hutchinson Builders will be collaborating with architectural firms Cox and ThomsonAdsett for this project. Arcadia Landscape Architecture is also involved in the development of this project.

The first stage of this project will include a performing arts centre, sports centre and the main building - which will be built in three separate structures. The development will also have space for a future second stage. Once the new educational institute is completed, it will be able to accommodate up to 1,500 students. 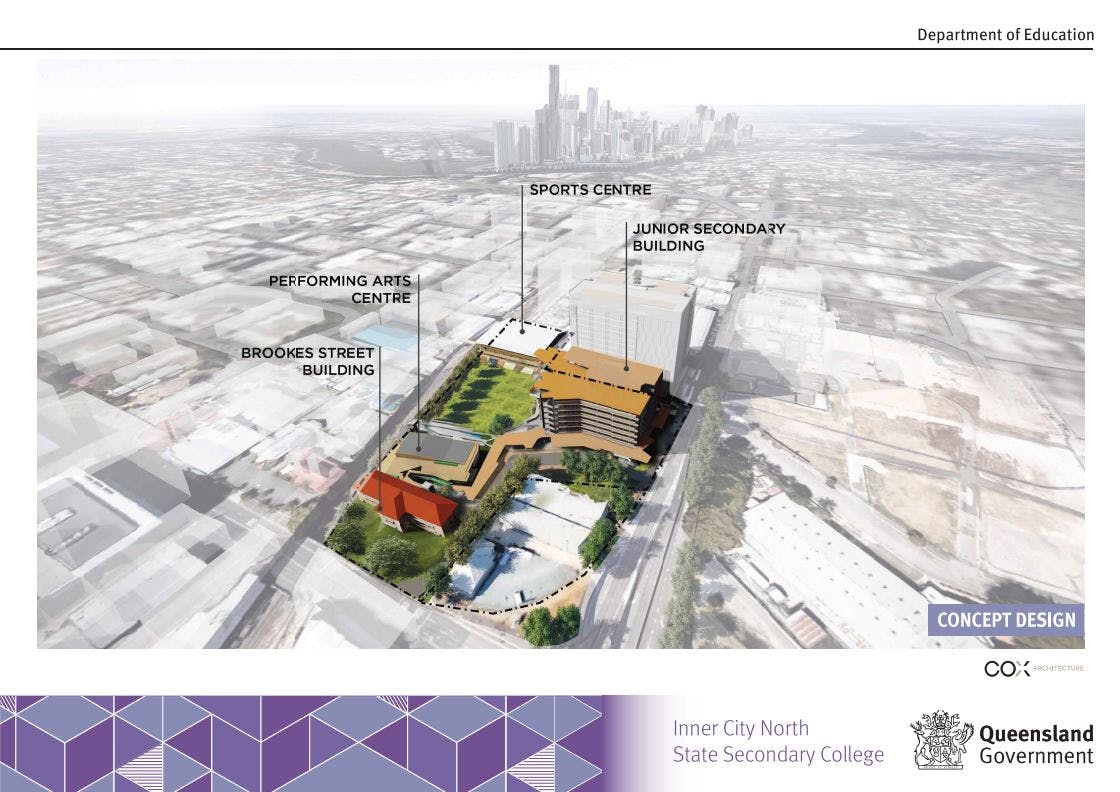 The proposed catchment area for this project has also been released, and it includes the suburbs of New Farm, Teneriffe, Bowen Hills, Newstead, Spring Hill and Brisbane City.

“The release of the school’s proposed catchment means the new school now has its own distinct local community.

“The proposed catchment has been created using an equidistant boundary between the new school and its neighbouring state high schools - the same process that applies for other schools across Queensland,” Minister for Education Grace Grace said.

The involved areas are now encouraged to submit suggestions for the school’s official name as well as expressions of interest for student enrolments.

Minister Grace also said that the proposed School Enrolment Management Plan (EMP) will be prioritising students from the local community, which will help relieve the pressure on inner city enrolments.

Sharon Baker, the new institution’s foundation Principal added: “The enrolment expression of interest will help up begin to establish our local school community.”

“I am looking forward to working closely with the community to build this outstanding new school,” Ms Baker said.

Construction of the new secondary school is expected to support up to 300 jobs.

What do you think of this new inner city project? Let us know your thoughts in the comments section below.

Negotiations to build a third station on the Airtrain line has been opened by the Brisbane Airport Corporation (BAC). The new station will provide rail access to the DFO complex as well as other facilities in the Skygate precinct.

East Brisbane is also set to benefit from a number of congestion-busting road upgrades, with a $33 million investment from the Australian Government. This is in addition to the $80 million invested towards road project in Brisbane’s north.

A new facility for the maintenance and operation of up to 60 Metro vehicles will soon be built in Brisbane’s south following the awarding of a design and construction contract to ADCO Construction Pty Ltd.