Building the first WestConnex tunnel is set to begin within months

Building the first WestConnex tunnel is set to begin within months, with planning approval received for the new underground M4 East, an important step in the crucial project. Federal Minister for Major Projects Paul Fletcher said the tick of approval from the NSW Department of Planning and Environment meant initial works could begin straight away on the 5.5km tunnel, with major construction expected to start in the middle of the year.

M4 East works are part of Stage One (WestConnex M4 - Parramatta to Haberfield) of the WestConnex project.

Due to open to traffic in 2019, the M4 East will extend the existing M4 Motorway from Homebush to Haberfield, reducing congestion at the end of the M4, saving travel time for motorists and removing cars from local streets. It will also bypass Parramatta Road and connect to City West Link.

The project is predicted to accommodate an estimated 67,700 vehicles each day through 5.5 kilometre tunnels with three lanes in each direction by 2021.

The M4 East extension is in addition to the works currently underway to widen the existing M4 Motorway to four lanes in each direction from Church Street, Parramatta to Homebush Bay Drive, Homebush.

Some key benefits of the M4 East project include: 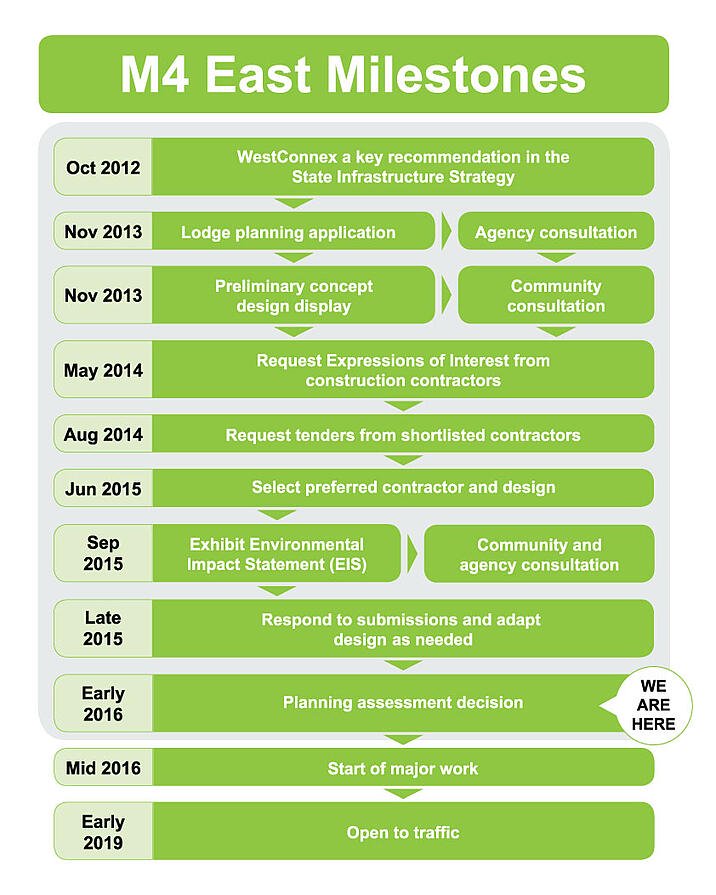 Planning approval for the M4 East tunnel followed a robust EIS assessment process that considered submissions from the community and business. Construction will generate more than 2,500 direct jobs alone, and employ more than 100 apprentices or trainees, with the project adhering to strict air quality standards.

Another milestone was reached last week with the planning application lodged for the final stage of WestConnex, the tunnel joining the widened and extended M4 and the M5 Motorway. Read more about this step with a previous post of ours - WestConnex Stage 3 (M4-M5 Link) planning underway!

The local community has already benefited from new world-class hockey facilities built at St Lukes Park at Concord to allow nearby Cintra Park to be used as the midway tunnelling point for the M4 East.

"This is another WestConnex milestone and, once finished, the tunnel will allow motorists to travel between Homebush and Haberfield without stopping at a single traffic light," Mr Fletcher said.

NSW Minister for Roads Duncan Gay said this step of the project included a focus on easing congestion on notoriously clogged Parramatta Road, with the government exploring options to improve public transport.

"I don't want motorists to lose any more time sitting in the car park that is Parramatta Road, and WestConnex will be crucial in fixing the problem," Mr Gay said.

The M4 East will join the widened M4 at Homebush and extend underground through a tunnel with three lanes in each direction, and exit ramps at Parramatta Road and the City West Link.

Motorists driving along the M4 between Parramatta and Homebush are already seeing extensive work taking place to widen that part of the motorway, which is the first section of WestConnex.

For those looking to put their bids forward, we’ve created a free eBook on 10 tips to successful tendering. The content of this eBook was developed from a State Government tendering workshop so be sure to download it below to get a thorough understanding of what's going to help your business stand out from the crowd.

Author's Note: Segments of this article originally appeared in a media release for the Minister for Major Projects, Territories and Local Government - The Hon Paul Fletcher MP

Tunnelling has begun on the long-awaited $3.8b M4 East, part of stage one of Sydney's $16.8b WestConnex project. M4 East is being delivered by a Joint Venture between Leighton Contractors, John Holland and Samsung C&T.

The $77.8 million Adelaide River Flood Plains Upgrade in the Northern Territory is one step to getting built, with the construction tender for the first package of works released to market.

The $16.8 billion WestConnex motorway development project has reached another milestone with the planning application lodged for the much-anticipated final stage of the project. The third and final stage involves the crucial link between the M4 and M5 corridors.