Campoona graphite mine development in SA given the green light

The South Australian Government has granted approval to Archer Exploration – under its wholly-owned subsidiary Pirie Resources – for its Eyre Peninsula Graphite Project.

The approval given is for the development of the Campoona open-cut mine and the Sugarloaf processing facility – which is expected to produce up to 140,000 tonnes of graphite ore annually. Approval was also given for the sourcing of processing water from the Pindari Borefield. 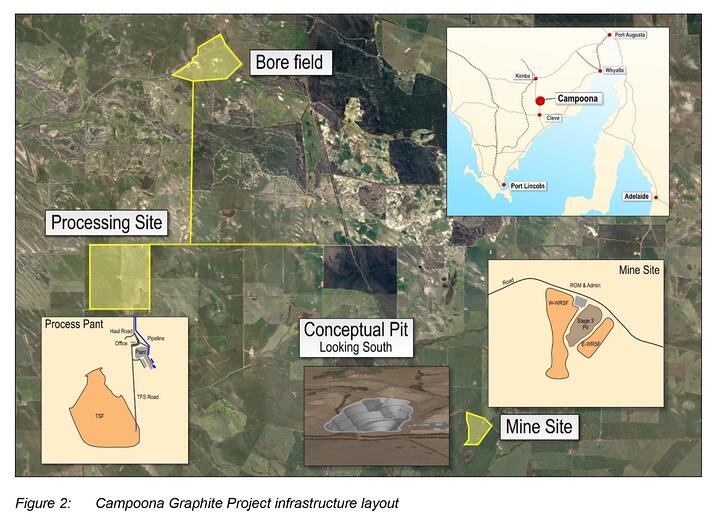 The project is located approximately 20 kilometres from Cleve on the Eyre Peninsula in SA. This development is expected to create up to 60 jobs during construction and about 35 jobs once operational.

Archer Exploration is expecting that some of the mined graphite concentrate from the Campoona mine will be processed to create graphene – a higher-value product which can be used as an electricity and heat conductor.

“Campoona is a further example of South Australia’s growing role as a global supplier of a broad range of mineral products required by emerging technologies.

“An exciting aspect of this proposal is the capacity to locally produce high-value graphene, which is becoming a sought-after ingredient in emerging technologies such as solar cells,” Mineral Resources and Energy Minister Tom Koutsantonis said.

Approval has been granted to Photon Energy by the New South Wales Independent Planning Commission for the development of the $200 million Gunnedah Solar Farm that will have a capacity of 165MW.

Adani Group has been given the green light to construct a $200 million 140MW solar farm located north of Whyalla in South Australia.

A $5.5 million grant has been awarded to APA Group by the Australian Renewable Energy Agency (ARENA) for the proposed Emu Downs solar farm near Cervantes in Western Australia, part of ARENA’s latest round of funding grants.