We share in CCF's passion for promoting the interests of civil contractors in Queensland, and want to catch up anyone that couldn't attend this morning's meeting. In short, the Queen's Wharf development represents "the most iconic project" to hit Queensland in a very, very long time. In fact, it will be the first time in almost 20 years a branded hotel will be built in Brisbane.

The job opportunities it will provide to not only construction professionals but also operational roles (hospitality, retail, farmers, florists, gardeners etc) when the development opens in 2022 is staggering. 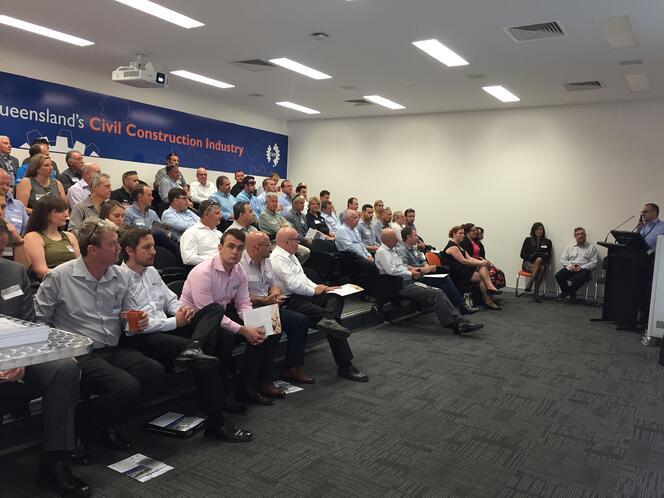 So why is the government doing this project?  And what did their Projects Chief, David Edwards, have to share?

The Australian destination market now offers more choices than ever. However, Queensland is still viewed as a "short term break" and Brisbane itself seen as without a strong identity. So what does this really mean? Brisbane is considered a transit destination by travelers, and so reflects a relatively low expenditure per visitor.

Luckily, the growing Chinese middle class has emerged. As a group, they represent an incredible opportunity for tourism. However, to capture their attention, we need three things: world-class tourism, leisure and entertainment.

Edwards himself said his meetings in Hong Kong with Asian developers showed they were 'dead serious about investing in Brisbane' and about their desire to find contractors they can partner with for further projects.  "We're looking to lock in a generation PLUS of people who will commit to Brisbane. But as a state and industry, we need to lift our game."

For any skeptics of IRDs (Integrated Resort Development), David also touched on Singapore as a case study.

When the first two integrated resorts, Marina Bay Sands and Resorts World Sentosa, opened in Singapore in 2010 they were a huge success. Within the first nine months of opening they raised $3.75 billion in GDP. Statistics also show in 2011 they experienced a record number of visitors with a 13.8% increase in arrivals to 13.2 million, and by 2013 visitor numbers had grown to more than 15 million per year.

So what opportunities are available during the construction phase? Star Entertainment's Alison Smith gave us the first real rundown of what to expect.

For a project of this size, little about the construction details have yet been released.

Firstly, construction will not start till early 2017, and are dependent on three non-heritage buildings being removed as well as the completion of 1 William Street. The Destination Brisbane Consortium are currently undergoing an expected 6 month masterplan phase.

Smith announced it's too early to reveal their procurement strategy, as they have not yet decided whether they will pursue one major contract, or open tenders for numerous contracts.

The first construction phase will be excavation, and developing "the most expensive hole Brisbane has ever seen" said Smith. The first two years of the Queen's Wharf project will be spent underground developing: 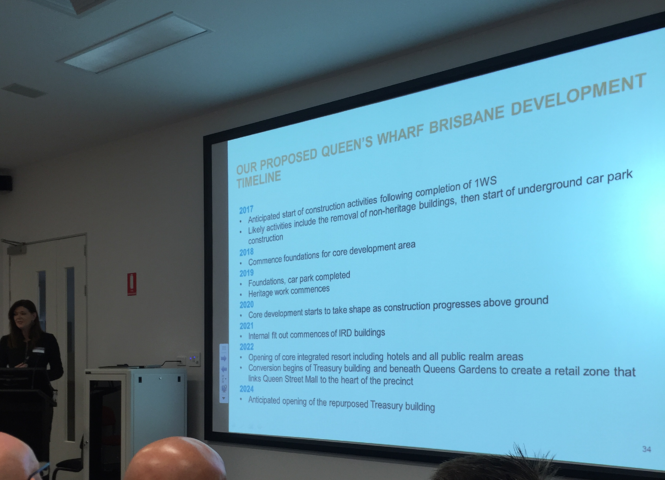 Some of the best news of the meeting? The Government is working with Star Entertainment to help formulate packages that make it easier for local contractors to be involved. Local preference policies will be in place.

The first question asked of the speakers is "where can contractors submit their capability statements?" Star Entertainment Group are currently amassing information for their Development Application in mid-2016 so have not yet started assessing contractors. However, you CAN submit your company's capability statement and any further correspondence to QWBenquiries@star.com.au.

If you'd like to learn how to effectively communicate your business capabilities, based on a QLD Government tendering workshop, we've compiled a free eBook on preparing a high impact business capability statement which you can download here.

Both Smith and Edwards specified they want to get the right suppliers from the best of QLD, not only for construction but also for when the precinct is up and running. They're working with industries now so that they can get them set up to deliver long term contracts.

Punched with a few jokes about the state of Brisbane's coffee, David spoke of the future of Queensland's and Australia's six-star tourism industry. TAFE Queensland and Star Entertainment Group have recently partnered to develop programs that will turn out the highly­ skilled workers needed.

“This partnership between TAFE Queensland and Echo Entertainment is laying the groundwork to cater for the next generation of skills demanded by the world­class project and similar high­end tourism opportunities across the state" said Training and Skills Minister Yvette D’Ath.

If it's not obvious enough, the CCF meeting provided a treasure-trove of insights about both the project, and what contractors can expect. I'd highly recommend checking out their event schedule for members to make sure you're not missing out on some really valuable opportunities. If you're not already a member, you can download an application form here. With more meetings planned about the Queen's Wharf project, you can count on seeing us there.

We'd love to hear your thoughts on the project too, just a leave comment!