Upgrades to the Barton Highway from south of the New South Wales – Australian Capital Territory border to the Rolfe Road intersection is now underway to provide two new lanes on this vital transport corridor.

The duplication project will help improve connectivity for local communities as well as create jobs and increase access to essential services in the region.

“Major work is now underway on the new lanes following the completion of preparation works such as initial fencing, utility relocations and site set up which started in November last year.

“In good news for local communities, the first stage of duplication works on the Barton Highway are expected to be extended by a further 2.5 kilometres out to Kaveney's Road,” Deputy Prime Minister and Minister for Infrastructure, Transport and Regional Development Michael McCormack said.

To date, the Australian and New South Wales Governments have invested approximately $200 million to deliver the Barton Highway duplication project, with the two governments investing $50 million each during the first stage.

This project is one of several highways being upgraded across the State to ensure safer and stronger regions.

“Duplicating the Barton Highway means safer journeys, better productivity and a bigger economy – and it's keeping our regional economies going at the time when they are doing it tough.

“Eventually, the Barton Highway will be duplicated from Hall in the ACT to the existing two-lane section on the Hume Highway, bypassing Murrumbateman, which will deliver a fully duplicated highway connection from Sydney to Canberra,” Minister for Regional Transport and Roads Paul Toole said. 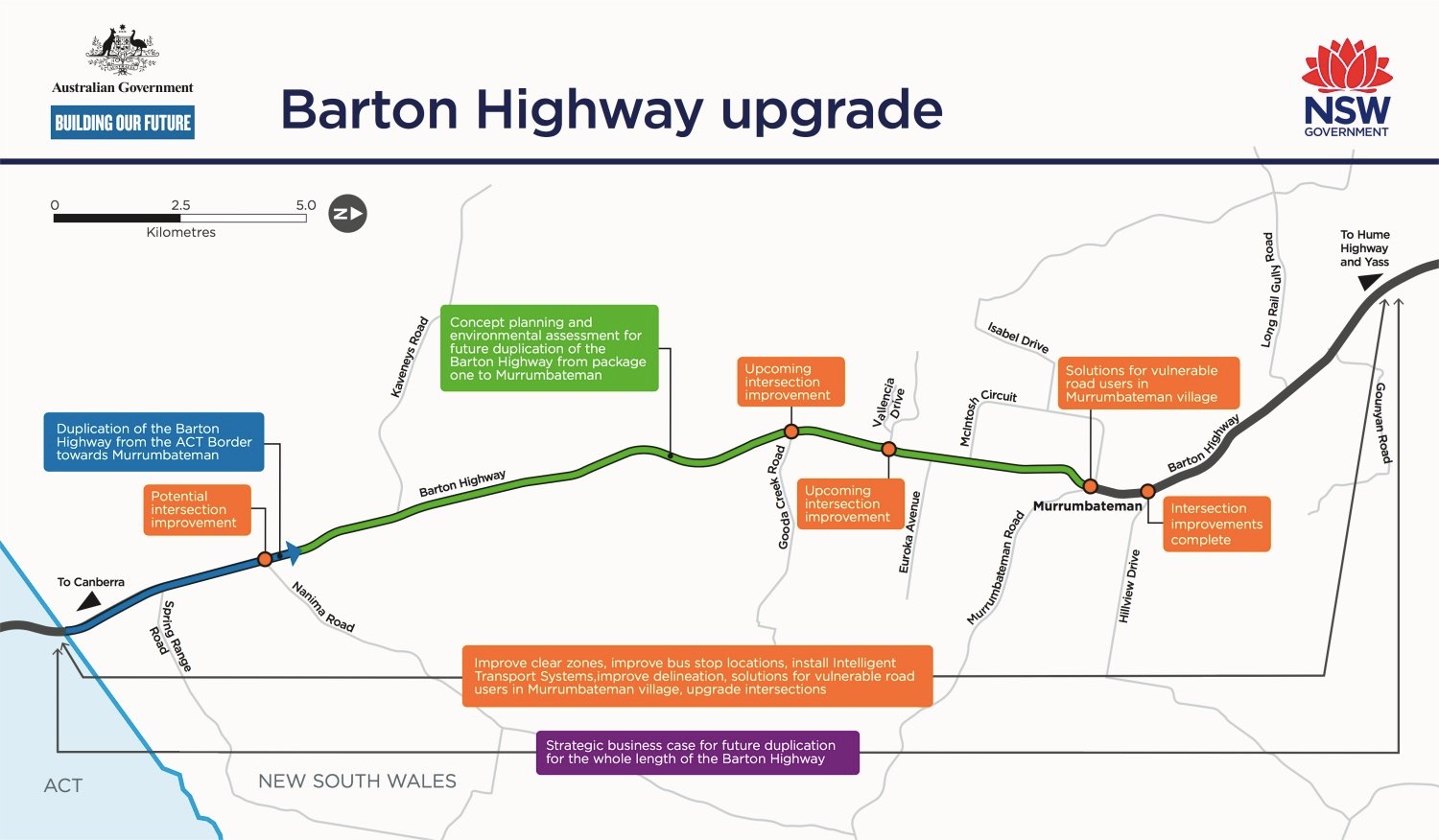 This multi-million-dollar project is set to improve safety for all road users driving through the southern region of New South Wales.

The project will not only provide local communities with improves access to health services, but it will also create employment opportunities.

“Barton Highway is an essential part of the NSW and ACT transport network and this project will go a long way towards supporting freight efficiency.

“I've heard from many people in the Eden-Monaro electorate of the difficulties this road presents. It gives me great pleasure to see major works underway,” Senator for NSW Jim Molan said.

The workforce that will deliver the Barton Highway duplication project will be made up of about 70 percent local workers, businesses and suppliers. From the time works commenced, about 200 local workers have been inducted to deliver the project.

“It's pleasing to see work progress with the expertise of so many local people and businesses, particularly after a challenging 12 months during the pandemic,” State Member for Goulburn Wendy Tuckerman said.

Weather and construction conditions permitting, the initial stage of the duplication projects is due to be completed in 2023.

Source: Minister for Infrastructure, Transport and Regional Development; Transport for NSW – Roads and Maritime (1, 2); About Regional

The Western Highway duplication project between Buangor and Ararat is set to restart construction this year, after a new planning amendment was approved.

New South Wales’ Port Botany rail line duplication project is a step closer to being built, with the tender to design and construct the project released to market and three companies have been shortlisted to submit formal tenders.