The sod has been turned and construction is ramping up on the $53 million Yeppoon Foreshore Lagoon Precinct development in Queensland.

According to Deputy Premier and Minister for Infrastructure and Planning Jackie Trad, this project highlights the State Government’s ongoing commitment to jobs creation as well as liveability in Central Queensland and the Livingston Shire through investing on infrastructure for the community.

“Not only will the Lagoon Precinct offer locals and visitors to the Capricorn Coast an iconic tourism destination and visitor experience, it will also provide more than 180 full time jobs during construction, and continue to inject money into the local economy.

“The Palaszczuk Government is incredibly proud to have invested $29 million in the Yeppoon Foreshore and Town Centre Revitalisation Project after strong lobbying from local MP Brittany Lauga,” Ms Trad said. 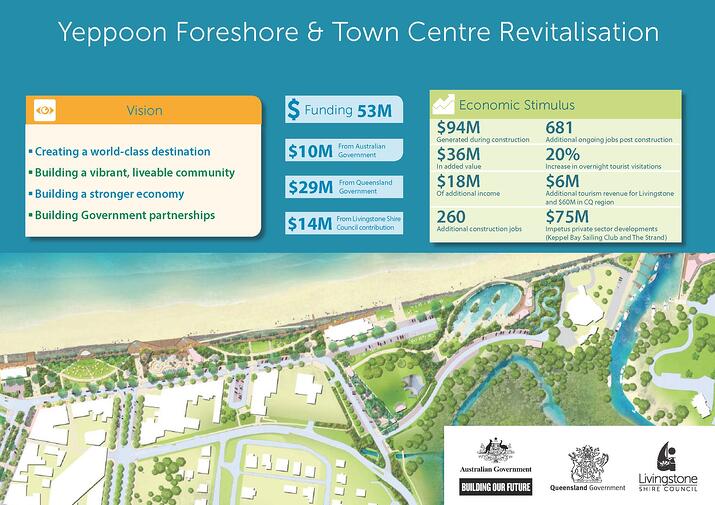 Mayor Bill Ludwig said that the detailed design for the 2,500-SQM lagoon was the result of an extensive community consultation process.

“The Lagoon Precinct is the spectacular centrepiece of the Yeppoon Town Centre and Foreshore Revitalisation Project and will encapsulate some of the unique attributes of the Capricorn Coast, including a swim-up infinity edge with stunning views over the Keppel Islands.

“It has been designed to include both a shallow children’s play area as well as an informal lap swimming area and shaded areas in and around the lagoon, while the two storey pavilion will offer stunning interactive dining areas overlooking the entire precinct and coastline,” Cr Ludwig said.

The Yeppoon Foreshore and Town Centre Revitalisation – Stages 3, 4 and 5 – is jointly funded by the Australian and Queensland Government as well as the Livingston Shire Council, contributing $10 million, $29 million and $14 million respectively.

The massive Stockyard Hill Wind Farm in the Pyrenees Shire in Victoria is expected to commence construction in 2018.

Construction works on the $53.32 million Kennedy Developmental Road Upgrade (Hann Highway) – between Mount Garnet and Hughenden – has officially commenced, which will be delivering a more reliable freight and tourist route for North Queensland. The project is also expected to create jobs for the local communities surrounding the project site.