Gold Coast Light Rail Stage Two project is on track with CPB Contractors (formerly Leighton Contractors Pty Ltd) announced as the successful contractor to design and build the 7.3 kilometre extension in time for the Gold Coast 2018 Commonwealth Games. The announcement was made by the Honourable Jackie Trad MP at today's CCF QLD State Conference. 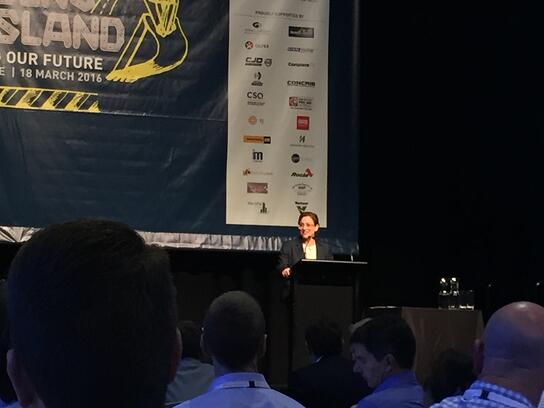 The project will cost $420 million, with the Queensland Government investing $270 million to deliver the project.

“Stage Two will complete the missing link between Brisbane and the Gold Coast and will provide an immediate boost to the construction industry supporting up to 1,000 new construction jobs,” Ms Trad said.

“The business case confirmed Stage Two will contribute an estimated $160 million to the Gross State Product and now we’ve selected the preferred contractor it is full steam ahead to deliver this project in time for the Commonwealth Games.

“Light rail has already transformed the Gold Coast, but Stage Two will provide a seamless journey for these passengers to move around the Coast and connect to Brisbane.

“This announcement sends a clear message that the Palaszczuk Government is getting on with the job of building infrastructure that will grow the economy and boost jobs.”

Mr Hinchliffe said the preferred contractor had been selected following a rigorous evaluation process considering the best value for money bid and an assurance construction would be completed by early 2018 to ensure the trams and integrated public transport system was fully operational in time for the 2018 Gold Coast Commonwealth Games.

“CPB Contractors has extensive rail experience and a strong track record in the construction industry and most importantly they’ve given a commitment Stage 2 construction will be opened ahead of the Gold Coast 2018 Commonwealth Games,” Mr Hinchliffe said.

“The Palaszczuk Government is satisfied CPB Contractors is experienced, well-qualified and has the expertise to manage the design and construction of the second stage of the Gold Coast Light Rail system and deliver it in time for the 2018 Games.

“Now we’ve announced the preferred contractors, early works on the light rail extension will able to start next month.

“Once it is built Stage Two, will have the potential to carry 3,000 passengers per hour which will be critical to support the transport plan for the 2018 Commonwealth Games.” 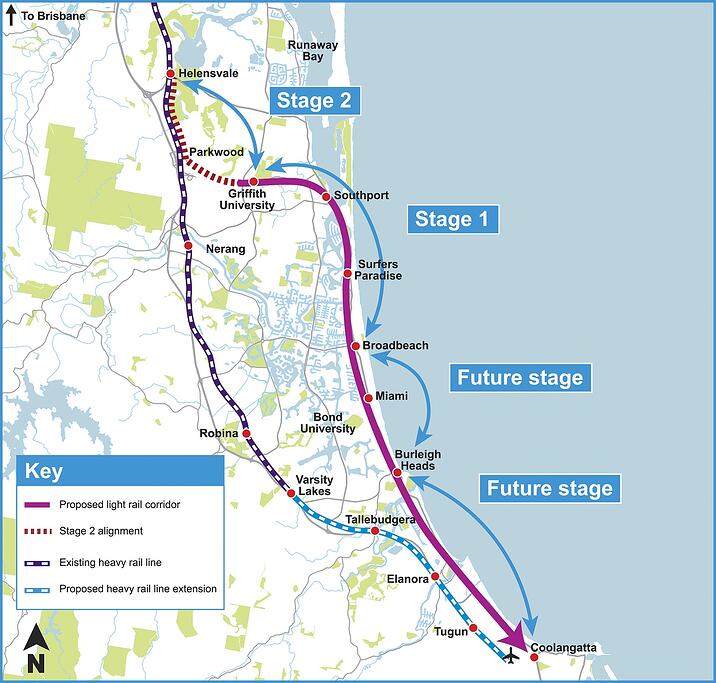 GoldLinQ Chairman John Witheriff said CPB Contractors would continue to refine their tender proposal to ensure the best design and construction methods were fully explored and worked through with GoldLinQ ahead of construction beginning.

“During this phase it is full steam ahead for CPB Contractors while they work on the detailed design for Stage 2, undertake survey work and site investigations and start recruiting their workforce,” Mr Witheriff said.

“As part of the contract commitments made by CPB Contractors, they will engage with local workers and businesses to work on the project, which is great news for the Gold Coast community.”

Stage 2 is a 7.3-kilometre extension that will connect the existing light rail system at Gold Coast University Hospital station to heavy rail at the Helensvale station.

The proposed alignment effectively utilises existing road and rail corridors, with the new track to run next to the Smith Street Motorway, Gold Coast Rail Line and the inter-regional transport corridor.

Stage 1 of Gold Coast Light Rail has delivered a 25 percent increase in public transport travel on the Gold Coast, with G:link trams carrying more than 10 million passengers to date.

Trams are currently carrying more than 20 thousand passengers each day.

Construction on the Coffs Harbour Hospital expansion in New South Wales is set to begin in April 2019, with CPB Contractors appointed by the State Government to deliver the main works for the project. CPB Contractors was awarded a $116 million contract for this project.

Two CIMIC Group companies have been engaged by CuString Pty Ltd for the early contractor involvement (ECI) phase of the $1.7 billion CopperString 2.0 project in Queensland.