Construction company John Holland has been awarded the first major Metro Tunnel contract, which includes excavating massive shafts in the centre of Melbourne as part of preparations for the tunnel and the new underground stations in the CBD.

The $324 million works package includes the excavation of huge open shafts adjacent to Swanston Street to enable the underground construction of the two new city stations built as part of the $10.9 billion Melbourne Metro Rail project.

The station shafts will be up to 35 metres deep – more than 11 storeys below the ground – and involve the excavation of 34 Olympic-sized swimming pools worth of soil and rock from beneath the city.

Excavation of the CBD North Station will involve two shafts – at Franklin and A'Beckett Street – which will be covered by massive acoustic sheds to reduce noise for neighboring residents and offices. Construction of CBD South will be involve the partial demolition of the carpark underneath City Square.

Building the shafts as part of this package will mean the project can get straight to work building the stations and tunnel underneath Swanston Street.

Other works in the package include the relocation and protection of up to 100 utilities, including gas, power and telecommunications services, and the 120 year old brick main sewer line under the Domain interchange. 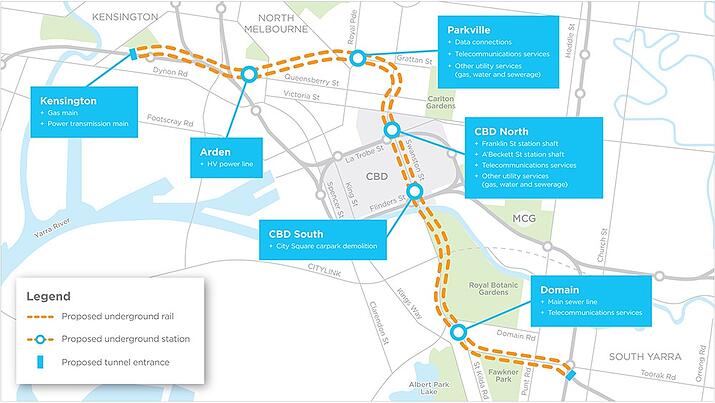 These works will start within weeks, with work on the stations shafts to begin next year, following the conclusion of Environment Effects Statement (EES) process currently underway and formal planning approval for the project. Subject to the necessary approvals, major works are expected to commence in 2017.

As Australia fastest growing city, Melbourne's public transport needs to grow with it. The Melbourne Metro will expand the City Loop, enabling major improvements in capacity, reliability and efficiency of train lines serving Melbourne's growth areas in the north, west and south-east.

Extending from Kensington in the west to South Yarra in the south-east, the city's newest rail line will involve construction of two nine-kilometre twin rail tunnels and five new underground stations.

The project will connect the Sunbury and Cranbourne / Pakenham lines for the first time, creating a new end-to-end train line through the inner city.

The Metro Tunnel is expected to create approximately 4,700 jobs nationwide at the peak of construction.

If you're interested in supplying plant or subcontracting for the Melbourne Metro tunnel project, It's important to know how to impress the decision makers of the project. Check out this free eBook: Preparing a Business Capability Statement, and make sure you're directing the right information to the right people.