Another milestone on the $18.275 million Exmouth Boat Harbour upgrade in WA has been reached as works on the project progresses. Transport Minister Dean Nalder has announced that after an extensive EOI and tender process, Ertech Pty Ltd – a Wangara-based company – has been awarded the $8.339 million major contract for stage 2 of the upgrade.

The contract includes the delivery of an 88-metre extension to the wharf, a hardstand extension as well as four new trawler pens and a raise on the southern breakwater.

“About 7,600 cubic metres of locally sourced rock will be used to increase the height of the breakwater to protect the trawler pens, while about 140 tonnes of steel will be used to extend the wharf to provide a new heavy lift zone and hardstand, significantly increasing the capacity of the facility.” – Minister Dean Nalder 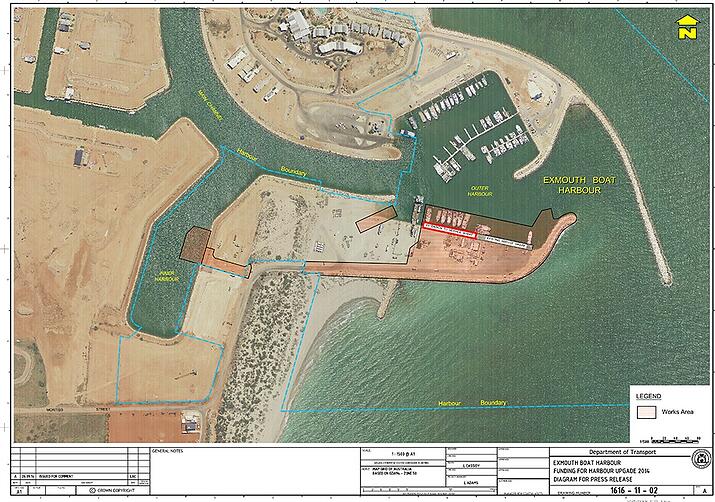 Stage 1 of the upgrade project has already been completed with 25 new boat pens built, costing $4.2 million, and dredging – as part of the project’s early works – is also nearing completion. The Exmouth Boat Harbour has been experiencing a high demand for docking space for recreational and commercial vessels, thus the need for an upgrade.

Regional Development Minister Terry Goodman has expressed that he is looking forward to the next stage – the most important stage of implementation – of the Exmouth Boat harbour upgrade project. Because Exmouth is strategically placed and it is the largest harbour south of Pilbara, the upgrade will reinforce the harbour as a vital maritime hub north of WA.

“The Exmouth Boat Harbour will better accommodate and service the rapidly growing supply vessel traffic, supporting the resources industry, as well as the growing tourist and recreational vessel traffic for the benefit of both current and future generations.” – Minister Terry Goodman

The Exmouth Boat Harbour upgrade has been funded through investments from Royalties for Regions. Works on stage 2 of the upgrade project – involving maritime structures and civil works – will commence by mid-July 2016 and is expected to be completed by mid-2017.

Want to win more tender bids for your construction business? We have created the free eBook below – Top 10 tips for successful tendering – to help you create better tender bids that will stand out from the rest.

$18m Rio Tinto mine expansion to create jobs in Pilbara

The WA Government has given Rio Tinto the thumbs-up to extend their Western Turner Syncline (WTS) mine in the Pilbara, near Tom Price.

Barminco Holdings Limited and Independence Group NL (IGO) have announced the beginning of works to develop the Bollinger section of the Nove project, Norseman in Western Australia.

Construction has begun on the missing link in the Darebin-Yarra Creek Trail which will connect 600 kilometres of pedestrian and cycling paths for the local community across north and east Melbourne.