Three companies have been shortlisted to prepare detailed proposals for construction of Stage Two of the $1.12 billion NorthLink WA initiative. The bigger bombshell from this project is that the Government has confirmed a third stage. The development stage for Stage Two had initially planned for a new 37km high standard link from the intersection of the Reid and Tonkin Highways to Muchea. However, we can confirm that Stage Two, previously termed the Central and Northern stage, is now being split. Stage Two now only comprises of the Central section, Reid Highway to Ellenbrook. Stage Three of the $1.12 billion project will tackle the Northern Section from Ellenbrook to Muchea. with construction scheduled to start mid 2017 with completion mid 2019. 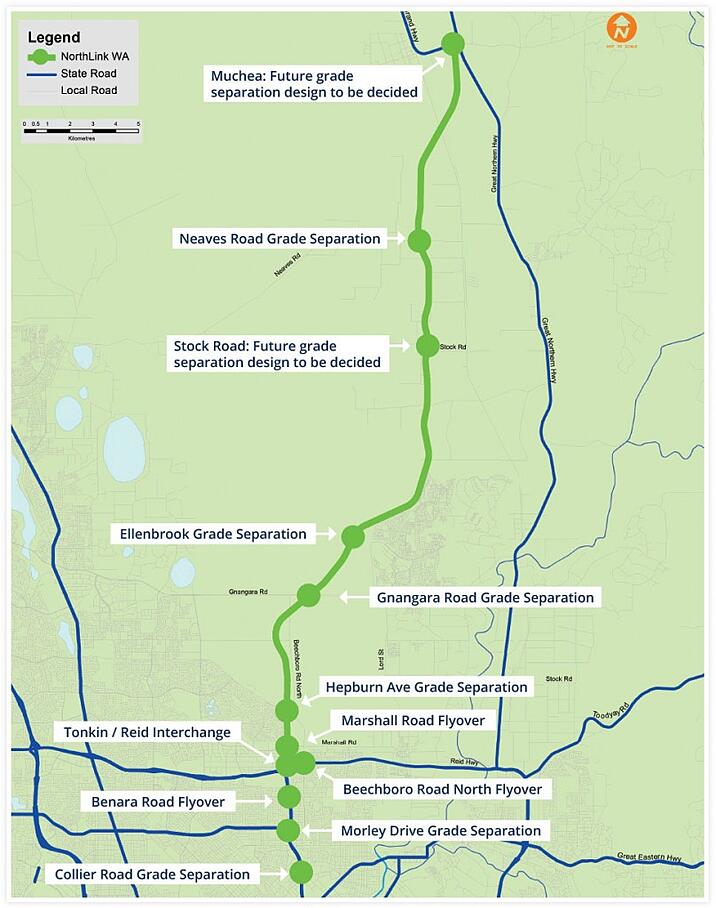 The delivery phase for the entire NorthLink WA project now looks like:

Minister for Major Projects Paul Fletcher announced that the shortlisted companies are:

“Providing extra road capacity to Perth's north-east is a key priority now and in the future, given the Ellenbrook population is expected to grow to 47,000 by 2031.

“The successful proponent for Stage Two is expected to be announced mid-2016.”

“This will improve services for regional traffic movements to commercial and industrial areas such as Malaga, Kewdale, Perth Airport and Perth CBD,” Mr Nalder said.

“Construction work on Stage Two is expected to start in late 2016 and we expect to follow soon after with Stage Three commencing in 2017.

“Work on NorthLink WA Stage 2 is expected to be completed in 2019.”

NorthLink comprises of the Southern Section, also called the Tonkin Highway upgrade (Stage 1), and the Central & Northern Section, also termed the Perth Darwin National Highway (Stage 2). The first package of works for the Tonking highway Grade Separations was recently awarded to John Holland, with construction anticipated to commence in mid 2016.  The Australian Government is contributing $894 million and the Western Australian Government $223 million to the NorthLink WA project.

It’s a large-scale project with large-scale benefits. The PlantMiner team will be able to assist with procuring your plant hire rates including excavators, rollers, graders, trucks, and cranes – just to name a few.

If you're tendering for these works, or are interested for future projects, it’s a powerful tool to know how to get the best value rates for your project.

We know it’s time consuming to research this from scratch, so we’ve written an eBook on the 7 Factors Affecting Plant Hire Rates. Construction professionals that understand the changing market are better equipped to provide value to their client.