As announced in the 2022-23 Federal Budget for Queensland infrastructure projects, the Australian Government has committed $1.6 billion towards the construction of heavy rail on the Sunshine Coast along the CAMCOS corridor.

“This $1.6 billion investment shows that the Morrison Government is serious about delivering for the Sunshine Coast by funding the infrastructure it needs to host a successful 2032 Olympics and support the projected population growth across the region over the coming decades.

The proposed heavy rail will link the existing line at Beerwah to a new station in the Maroochydore CBD. New stations are also proposed to be built at Caloundra, Kawana and Maroochydore.

Once up and running the new rail line will improve connectivity to Brisbane as well as open more opportunities for employment and labour mobility for a generation of skilled workers and local employers.

“This is about more than connectivity. It will also alleviate population growth pressures in our region by shifting housing density around new stations, it will get people out of cars and onto trains, and it will help activate Australia’s newest greenfield CBD.

“This is the most transformative project the Sunshine Coast will see in generations,” Federal Member for Fairfax and Special Envoy for the 2032 Olympic and Paralympic Games Ted O’Brien said. 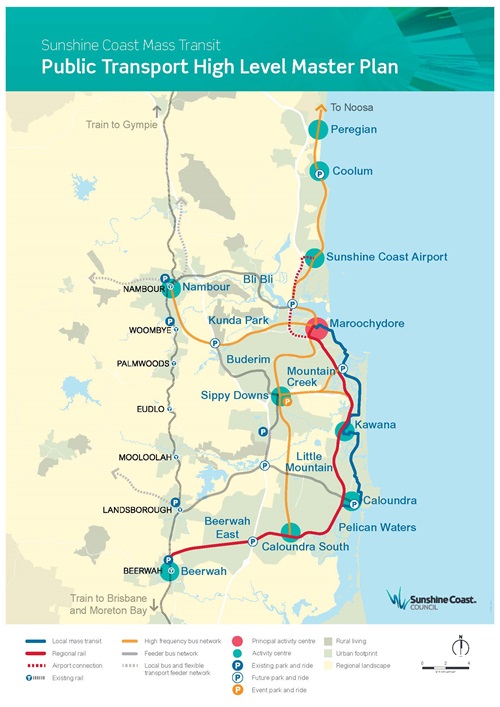 The significant funding will help deliver a 37-kilometre passenger rail line that branches out to the east from Beerwah to Caloundra and Maroochydore.

Funding for the estimated $3.2 billion project is going to be provided on a 50:50 basis with the Queensland Government.

“Our Government has already delivered funding for the duplication of the North Coast rail line, upgrades to the Bruce Highway, Steve Irwin Way and the Mooloolah River Interchange to the tune of nearly $3.7 billion.

“This additional $1.6 billion delivers on our number one priority of bringing heavy rail to the Coast, connecting the Hinterland and our coastal communities,” Federal Member for Fisher and Speaker of the House of Representatives Andrew Wallace MP said.

Construction of this new rail line is estimated to be completed within a decade and is projected to support up to 9,550 direct and indirect jobs.

The Sunshine Coast Airport – located in Marcoola, Queensland – is set for an expansion that will enable it to meet the needs of the growing community as well as continue supporting the growth of the region’s economy.

The Mooloolah River Interchange upgrade on the Sunshine Coast is moving a step closer to beginning works as it enters the consultation stage.