Improved traffic flow and reduced travel times will soon be delivered for the more than 100,000 motorists using the Caloundra Road and Nicklin Way roundabout in Queensland’s Sunshine Coast with a proposed upgrade progressing towards construction.

The upgrade between Omrah Avenue and Nicklin Way will deliver a new connection from the Caloundra central business district to Nicklin Way, north of the roundabout.

In addition, the project will also enable traffic to enter the “City of Beaches” via an alternative route.

The proposed 1.6-kilometre upgrade is comprised of two sections.

The first section will run between Omrah Avenue and Arthur Street. This section is funded and will be delivered by the Sunshine Coast Council. 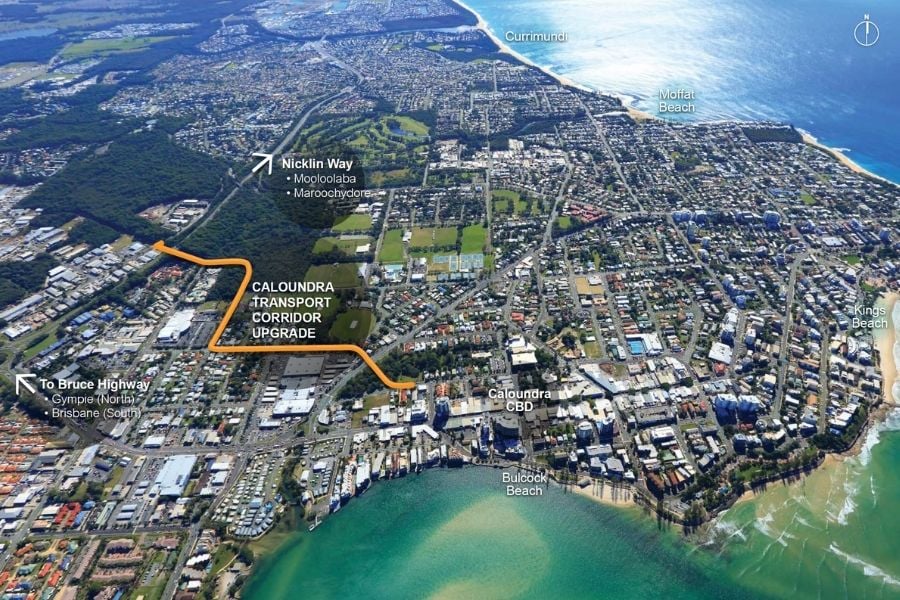 On the other hand, the second section will run from Arthur Street to Nicklin Way – also referred to as the Nicklin Way/Third Avenue extension – and this project is jointly funded by the Council, the Queensland Government and the Australian Government.

This section of the project will be providing a new connection to central Caloundra, which improves accessibility, safety as well as connectivity in the region.

“This integrated transport upgrade project is part of a long-term plan to provide better and safer access to and from Caloundra for public transport users, cyclists, pedestrians and motorists now and well into the future.

“This project has been the subject of numerous transport studies and careful planning over the past eight years and is now ready to progress to detailed design, thanks to the partnership between our Council and the Federal and State governments,” Sunshine Coast Council Mayor Mark Jamieson said.

Section 1 of the upgrade is estimated to cost $19.6 million while Section 2 has secured funding from three levels of government – $7 million each from the Australian and Queensland Governments and $4.2 million from the Sunshine Coast Council.

The $7 million funding commitment from the Australian Government was announced to be included in the recent 2021-22 Federal Budget.

“This project will see a new transport corridor connecting Nicklin Way to the CBD north of the Caloundra Road roundabout built in stages, improving connectivity and allowing traffic volumes to be distributed across two key access roads to the city.

“This project will reduce congestion and bolster travel times for the Caloundra region and is part of our Government’s $110 billion, 10-year infrastructure pipeline which is securing Australia’s world-leading economic recovery,” Minister for Communications, Urban Infrastructure, Cities and the Arts Paul Fletcher MP said.

According to Federal Minister for Fisher Andrew Wallace, this project is a “welcome relief” for residents that have been suffering due to the congestion on Nicklin Way and Caloundra Road.

“I have been working hard for years for a real road solution which will make a difference to the total gridlock around the Nicklin Way roundabout. This Federal Government funding is the key which will unlock this long-standing headache for Sunshine Coast locals.

“With this funding, along with the more than $3.5 billion the Morrison Government is investing in Bruce Highway upgrades and Rail duplication in our region, we are making sure that Sunshine Coast locals can get to where they need to go sooner and safer,” Minister Wallace said.

The Omrah Avenue to Nicklin Way upgrade project is part of the Caloundra Transport Corridor Upgrade (CTCU) that is aiming to deliver major transport infrastructure that will support the “future of Caloundra’s lifestyle and economic development needs”.

“This is part of the Queensland Government’s infrastructure pipeline on the Sunshine Coast, which includes more than $3.9 billion worth of jointly funded road and rail upgrades supporting thousands of jobs,” Queensland Transport and Main Roads Minister Mark Bailey said.

Currently, the Sunshine Coast Council is working closely with nearby landowners and stakeholders to help minimise impacts of the project as well as ensure that they are kept in the loop while the project progresses.

Updates and other information – such as schedules of drop-in sessions – on this vital upgrade project can be found here.

The first sod has been turned and major construction works are now underway on the $35 million Riverway Drive duplication between Gollogly and Allambie Lane.

BMD Constructions has been awarded the $15.3 million contract to deliver key infrastructure works for stage two of the Ashley Drive Upgrade project in Canberra.