Two massive tunnel boring machines (TBMs) for Cross River Rail are set to break ground at Woolloongabba early next year and Queensland businesses are giving a hand to prepare these TBMs.

Over 100 local companies are helping prepare the 1,350-tonne 165-metre-long TBMs, which will be excavating the bulk of Cross River Rail’s 5.9-kilometre twin tunnels.

“The Palaszczuk Government has a $51.8 billion infrastructure program that locks in jobs to support Queensland’s economic recovery.

“More than 100 local subcontractors and suppliers are benefitting from more than $10 million in work to help get these TBMs ready,” Transport and Main Roads Minister Mark Bailey said.

One of the local businesses that benefitted is family-owned company QIC Protective Coatings – based in Birkdale – who repainted the TBMs.

So far, Cross River Rail has supported more than 2,400 workers.

“The first TBM has been assembled and is going through its final checks this week, and the same process will be completed with the second machine next month.

“Crews remain on track to launch the TBMs from the Woolloongabba station site early next year,” Minister Bailey said.

From the Woolloongabba site, the TBMs will dig under the Brisbane River towards the site of the future Albert Street Station by mid-2021, then continue on to the new Roma Street Station and finally emerging at the northern portal in Normanby.

While the TBMs are digging through hard rock, they will also be installing large 4.2-tonne precast concrete segments that will line the tunnels. 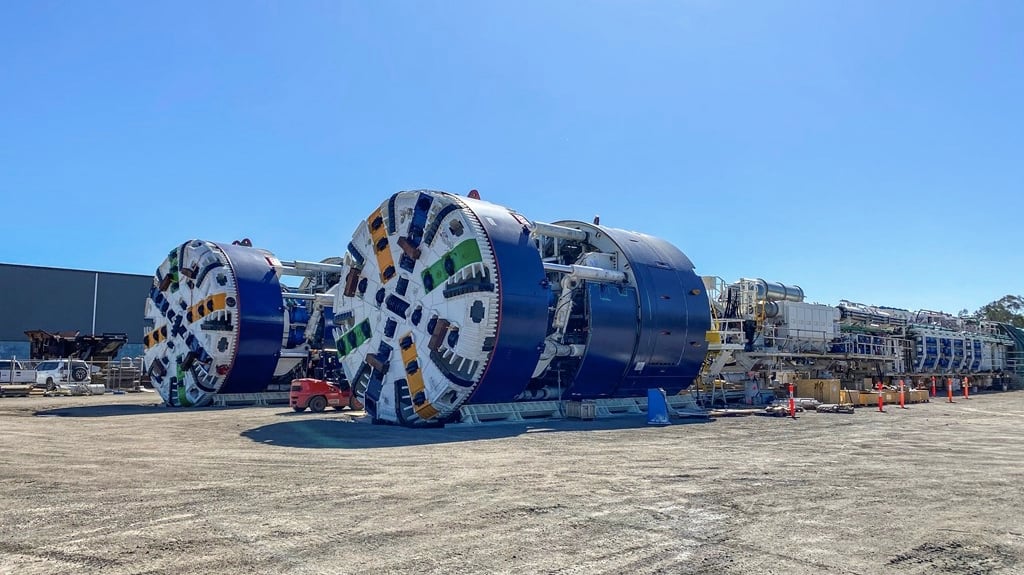 The Cross River Rail is a new 10.2 kilometre rail line that runs from Dutton Park to Bowen Hills and it includes 5.9 kilometres of twin tunnels under the Brisbane River and the CBD.

This transport infrastructure project will be delivering a second river crossing that will relieve the bottleneck on the existing rail network as well as allow more trains to run more often.

Works are already underway at various sites across the project and major construction on Cross River Rail is due to be completed in 2024.

Approximately 1,500 jobs each year will be supported over a five-year construction period including 450 new apprentice and traineeship opportunities.

A new pedestrian and cycling bridge is going to be built soon as part of Queensland’s Cross River Rail development, providing vital connections from the new Boggo Road underground station.