More Queensland projects have been chosen as part of the latest Australian Renewable Energy Agency’s (ARENA) funding round than any other Australian state, with six large-scale solar generation plants to be built in regional Queensland.

Five plants in New South Wales, and one plant in Western Australia has also been slated for funding. All twelve solar farms expected to triple Australia’s large-scale solar capacity from 240 MW to 720 MW, providing enough energy to power 150,000 average Australian homes and deliver one tenth of the new capacity required to meet Australia’s 2020 renewable energy target.

According to Premier Annastacia Palaszczuk, the Queensland projects are expected to provide "300 megawatts of renewable energy generation capacity as well as boost investment by $500 million and create more than 500 direct jobs and hundreds more indirect jobs in regional Queensland." 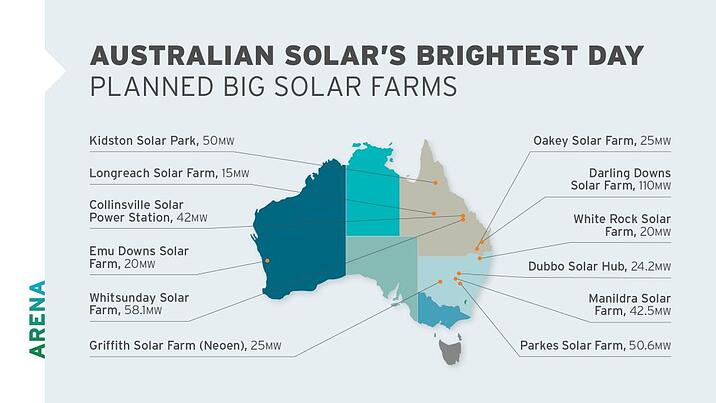 The largest solar farm in Australia will now be located on the Darling Downs, with The Whitsunday, Kidston, Oakey and Longreach Solar Farms also successful in securing State Government support through long-term revenue contracts.

ARENA CEO Ivor Frischknecht said construction could start and finish as early as next year.

“It is now up to successful companies to deliver these projects in line with ARENA’s requirements, which could see all plants built by the end of next year. This is an aggressive timetable to lock in financing, off take arrangements, connection agreements and required approvals," said Mr Frischknecht.

“The projects delivered through the ARENA funding round will build on current expertise and generate new knowledge for the burgeoning large-scale solar sector including co-location of solar and wind.

“Australia’s big solar revolution is tantalisingly close and, as more home-grown businesses step up to provide construction, engineering and financial services, this newest tranche of ARENA-supported projects is well positioned to take the sector even closer to commerciality.”

If you'd like to hear more about renewable energy projects in Australia, subscribe to Felix Project News. We'll send updates straight to your inbox, so you don't have to go digging for industry dirt. Simply click the 'subscribe now' button below.

VIC roads maintenance blitz to support up to 1100 construction jobs

Hundreds of freeways, arterial and regional roads across Victoria are set to be upgraded as the Victorian Government invests over $870 million to fix the roads that locals rely on each day.

Twenty-two (22) eligible expressions of interest (EOIs) received by the Australian Renewable Energy Agency (ARENA) for its $100 million large-scale solar photovoltaic (PV) competitive round have been short-listed and invited to submit full applications for consideration.