Another project is gearing up to begin construction as part of the $2.27 billion Suburban Roads Upgrade – South Eastern Roads and Northern Roads package, which aims to upgrade suburban roads across Melbourne’s south-eastern and northern areas.

Major works on the Narre Warren-Cranbourne Road Upgrade will be commencing in mid-2022 and McConnell Dowell has been awarded the contract to deliver the project.

“Narre Warren-Cranbourne Road is a vital connection for the south-east, which is why the Morrison Government is committed to funding this project to help improve congestion and get people home safer and sooner,” Federal Minister for Communications, Urban Infrastructure, Cities and the Arts Paul Fletcher MP said.

The Narre Warren-Cranbourne Road Upgrade project will include:

“We’re getting on with the Narre Warren-Cranbourne Road Upgrade – to make it easier, safer and more accessible for locals to get where they need to go.

“Major works will get underway this year, with drivers to be the big winners of the project,” Minister for Transport Infrastructure Jacinta Allan MP said. 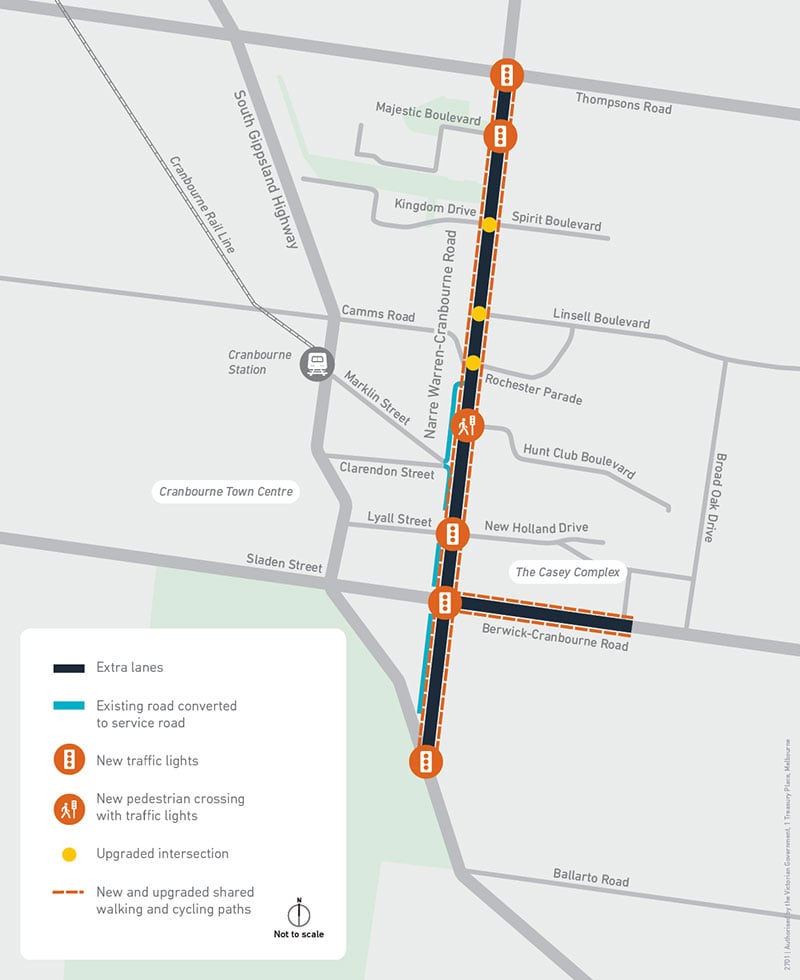 According to Federal Member for La Trobe and Assistant Minister for Customs, Community Safety and Multicultural Affairs Jason Wood MP, locals have been waiting for works to begin on the vital road upgrade.

“This project is something I have strongly advocated for as it will ensure locals get home sooner and safer while supporting local construction jobs.

“The south-east of Melbourne is one of the fastest growing areas in the country, with many residents in my electorate of La Trobe spending way too long being stuck in traffic, which is why projects like this are vital,” Minister Wood said.

In addition to upgrading the road, pedestrians and cyclists will also benefit from the project through a new shared path along with the installation of safety barriers.

“Local deserve to have safer and more reliable journeys as they travel along Narre Warren-Cranbourne Road – that’s why we’re adding an extra lane in each direction and upgrading roundabouts to reduce congestion, bring down travel times, and get people home safer and sooner.

The Narre Warren-Cranbourne Road Upgrade project is due to be completed in 2025.

Recently, it was announced that the Healesville-Koo Wee Rup Road Upgrade has commenced early works and its construction is also expected to be completed in 2025. This project is also being delivered as part of the Suburban Road Upgrade – South Eastern Roads and Northern Roads Package. You can read more about the upgrade here.

Work has commenced on the Victorian Government’s largest ever investment to upgrade Melbourne’s arterial road network - the $4 billion Suburban Roads Upgrade - that will improve congestion and travel times delivered through 22 key road projects.

Two more major upgrades to local Victorian roads are set to go underway and these upgrades will deliver a better, less congested and safer Hall Road and Western Port Highway.