The Victorian Government yesterday announced a new $105.5 million Melbourne Conservatorium of Music project – a partnership between the Andrews Labor Government and the University of Melbourne – which will expand and relocate the University’s elite music education and research facility from Parkville to Southbank, opening to students in 2019.

To be designed by John Wardle Architects, the new $105.5 million building will help consolidate existing MCM staff and students on the Southbank campus. The project will include a 443-seat auditorium, as well as a public square that will contribute to the community space plan for the Melbourne Arts Precinct Blueprint.

Construction is slated to begin in 2017, with first classes expected to commence in the building in 2019. 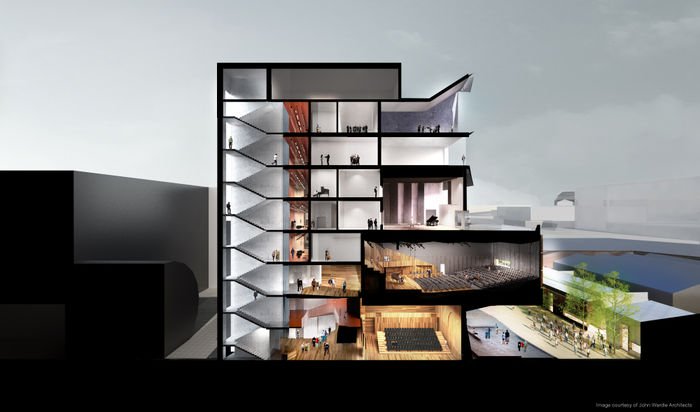 Image courtesy of the Melbourne Conservatorium of Music

The State Government is contributing the land under a long-term lease arrangement, as well as $3 million.

The $105.5 million development is expected to generate $350 million for the state and create more than 2,000 jobs during construction. The project is supported by major philanthropic partners.

The state-of-the-art campus will bring the activity of the students within the new building to the street and campus with choreographed views "that are revealed as building corners unfold or a window allows for a privileged aspect upon the process of rehearsal."

The existing Conservatorium Building, including Melba Hall, will be retained on the Parkville campus.

Image courtesy of the Melbourne Conservatorium of Music

The new Conservatorium building forms part of an ongoing redevelopment of the University of Melbourne's Southbank campus.

The Dodds St Stables Redevelopment, worth more than $40 million, will redevelop the Dodds Street stables into a visual arts wing at Southbank, creating a new entry point to the University and opening the campus to students, local business and residents.

The contract for the construction of the new Boundary Road interchange on the Bruce Highway at Narangba has been awarded to BMD Constructions. As said by Minister for Infrastructure and Transport Darren Chester, BMD Constructions was chosen among four shortlisted companies after a competitive tender process. Expression of interest was announced back in September 2015 and was closed on October that same year. This $100.4 million project is jointly funded by the Australian Government – who funded $80.3 million – and the Queensland Government who contributed $20.1 million.