Early works included the installation of traffic barriers along about 3 kilometres of the project route to help keep work crews and road users safe once major construction begins.

In addition, vegetation is also removed to open space for new lanes. Expert advice from an arborist and on-the-ground support from an ecologist were available during this time. In line with this, the project team will explore reusing logs in nature reserves to contribute to the local habitat along with the collection and harvest of seeds to aid in future replanting initiatives of trees and shrubs.

Major Road Projects Victoria (MRVP) said: “During this final stage of early works, a speed reduction will be in place along Sunbury Road between Shepherds Lane and the Bulla-Diggers Rest roundabout. The installation of the temporary traffic barriers in this section will provide one traffic lane in each direction for motorists, while we construct the new lanes safely behind the barriers.”

Earlier this year, Winslow Infrastructure was awarded the contract to build the vital road project.

Sustainability is one of the key focuses of this project and Winslow Infrastructure is contributing to this by establishing a new site compound on Shepherds Lane that is completely run by a solar hybrid generator system. The compound will also recycle rainwater collected on site as well as use LED lights and lighting sensors. 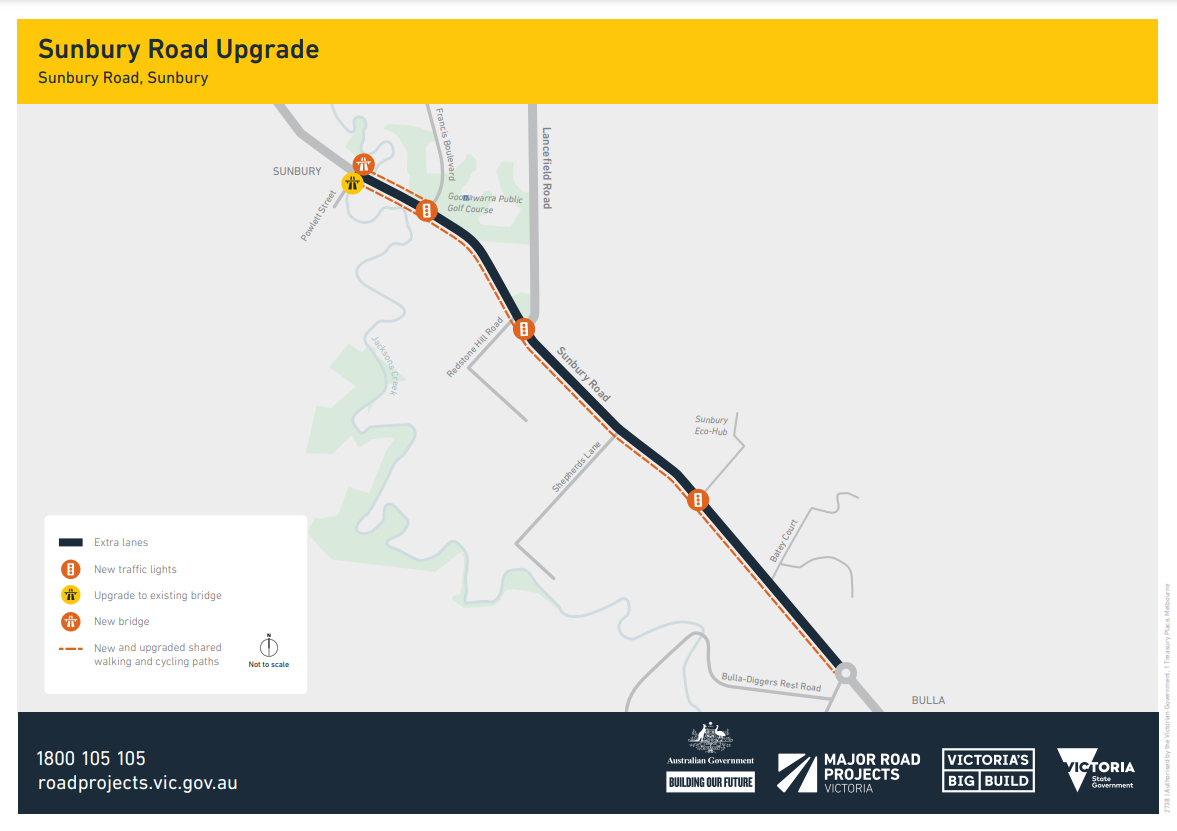 The Sunbury Road Upgrade will include:

“The vital project will improve traffic flow and access to Sunbury town centre, reduce congestion on Sunbury Road, and make it safer for the more than 25,000 motorists who use the road every day,” MRVP said.

The Sunbury Road Upgrade is being delivered as part of the $2.27 billion Suburban Road Upgrade – South Eastern Roads and Northern Roads package which covers upgrade works on suburban roads across Melbourne’s south eastern and northern areas.

The Sunbury Road Upgrade is due to be completed in 2025.

Another major milestone has been reached on the $2.1 billion Sunbury Line Upgrade in Victoria, with a second package of works awarded to the Rail Infrastructure Alliance which is comprised of John Holland, CPB Contractors, AECOM and Metro Trains Melbourne.

Motorists in Melbourne’s northern and south eastern suburbs are one step closer to experiencing safer and less congested travels along arterial roads, with the announcement of three shortlisted builders to deliver the Victorian Government’s $2.2 billion Suburban Roads Upgrade.

Delivery of the largest investment in locally made trams in Australia’s history is a step closer to beginning following the appointment of Bombardier Transportation Australia as contractor to undertake the $1.85 billion Next Generation Trams Project.