What to expect for the next year in residential construction

A strong indicator of a state's economic growth is whether they are experiencing strong waves of commercial and residential works. However, the housing market is cyclical and top developers should prepare for changes in demand for instructrure, engineering work, civil and public work, architercture and other design services.

Housing Industry Association's latest Housing 100 report shows the house-building boom reached new heights in the year to June, with new home starts rising to 18.3 percent to a record 212, 247. The growth capped a third straight year of expansion - only the fifth time that has happened in the last 60 years - and showed the step change in demand and supply of new housing since the previous peak of 187,000 dwelling commencements in 1994. A promising "very short term" outlook is likely to mean a surge in construction during the rest of this calendar year, but that will not last, the HIA says.

"HIA's forecast is for a (seasonally adjusted) total of 213,400 new dwellings to be commenced in the 2015 calendar year, which represents a 7.5 per cent increase compared with the previous year," the report says. "The level of activity is expected to then fall quite sharply, although this decline is of course exaggerated by the extremely high level reached at the peak."

Changing Market - "Reflects the wider evolution of the Australian economy"

With activity strongest in the non-resource states, the housing market is in contrast to it's languid performance just a few years ago, when WA and Queensland were the crucible of the two-speed economy in its last form. That performance was likely to continue, said Dale Alcock, managing director of Perth-based ABN Group, the country's second-largest home builder.

"The relative overheating of the Sydney market is very much around a catch-up," Mr Alcock said. "That market was off for many years and they were under building. The catch-up in Sydney is very much as a result of that. It may just slightly overshoot the runway but Melbourne is steady. It's a very steady economy and market. I don't see they're overbuilding. It's more that they'll be meeting the demand that's there." 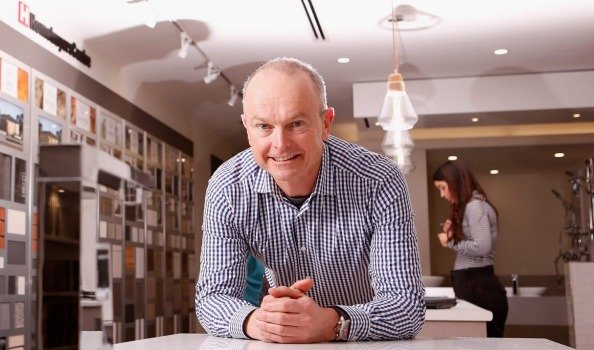 "There's a lot of overseas migration that might enter through Sydney but Sydney being a very expensive place, you'll find a lot of that makes its way to Melbourne incrementally," Mr Alcock said. "Melbourne's a net gainer out of that."

As the population grows, NSW continues to make up for a lost decade of growth. New housing starts rose 20 per cent in NSW in the year to June and 26 per cent in Victoria over the same period, the Housing Industry Association's Housing 100 report estimates.

This is giving a boost to many. Brookfield Multiplex, which does more commercial construction work than residential, jumped into seventh place on the NSW top-20 list from nowhere, with 663 housing starts during the year. The company was also the biggest absolute gainer during the year overall, with an increase of 1364 starts, a 62 per cent rise on the previous 12-month period.

Newcastle-based McDonald Jones Homes boosted its number of starts by almost a third, or 273 detached houses, propelling it to 14th position in the top 20 home builders nationally, with a total of 1165 dwellings.

The strong market is also rewarding interstate operators who have invested in the state. Melbourne-based volume builder Metricon held its position at No. 8 on the NSW list of home builders but increased its NSW housing starts to 600 from 453 in 2014 – a 32 per cent rise. In Victoria, Metricon also held third place but increased its number to 1898 from 1579 starts.

West Australian home builders have been among the leaders in the housing development industry but the resources-induced slump, that has pushed Perth home values down 4.9 per cent in the year to date, may change that.

The market share of WA's top 20 home builders fell over the past year. While housing starts in WA as a whole rose 9 per cent to 31,569 in the year to June, according to the Housing Industry Association – which published its numbers ahead of the official ABS figures to be revealed next month – the share of the largest builders fell to 57 per cent from 66 per cent of the total. 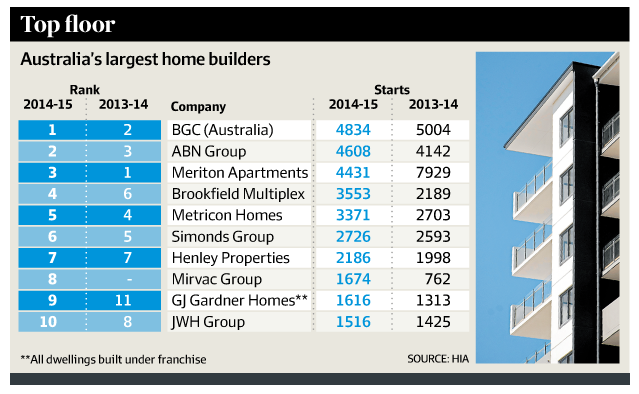 "The more resources-driven states like WA and Queensland will have headwinds to deal with over the next couple of years," said ABN Group managing director Dale Alcock. "The demand will be there over the long term, but we've got a little bit of pain to get through in the interim."

"The next two years in WA there will not be an increase in lot pricing," Mr Alcock said. "Escalation has disappeared out of the market as greater competition for land sales emerges from a declining market. The same is true for housing prices on the labour side. We are now seeing available labour coming back into the market as our housing production is slow. We are also getting workers returning back to our industry from the mining and resources industry."

"We would have definitely seen commencements slowing in WA, but have not seen a corresponding slowdown in our other market which is Victoria," Mr Alcock said.

But in the cyclical WA economy, it was only a matter of time before the situation, which is already playing out, improved, Mr Alcock said.

Has your business been dependent on housing works in the past? We all know the hire industry is technologically behind other markets in it's interactions with customers. There is definitely an opportunity to grow there. Look at how other markets operate, and how customers receive their goods.

You'll notice that a lot of work for businesses these days comes from online efforts. Everyone has a smart phone, and can access online information and book things online immediately.

There's so many different facets of hire across different markets, products and equipment ranges. To stay competitive, you need to find a marketing and development solution to fit all needs.

The Australian Government has released the Budget 2019-20 which focus on delivering infrastructure that will aid in managing the nation’s growing population as well as help meet the country’s freight challenge and to get Australians home quicker and safer.