The $386.5 million Great Eastern Highway Bypass Interchanges project in Western Australia is now under construction and is a step closer to providing improved connectivity and safety as well as relieve congestion in Perth’s Eastern Metropolitan region.

The beginning of major construction follows the appointment of the Greater Connect Alliance – comprised of Laing O’Rourke, AECOM and Arcadis in partnership with Main Roads WA – as preferred builder for the project.

Initial construction works will focus on the Bypass around the Abernethy Road intersection, with works to include building a temporary alignment of the Bypass to enable traffic to continue moving while construction on the first new interchange gets underway.

Construction on key components of the project will commence progressively from 2022 onwards.

“The Great Eastern Highway Bypass Interchanges will be a game-changer for road users in Perth’s east.

“The project brings together five long-awaited road upgrades, which will reduce congestion, improve safety and enhance access into Midland, while providing better connectivity to the Hazelmere, Forrestfield, Kewdale and Perth Airport industrial areas.

“It will also complete the last 30 kilometre missing principal shared path link along Roe Highway between Midland and Jandakot, creating an uninterrupted path for cyclists and pedestrians.

“Our Government is continuing to create opportunities for local businesses and support local jobs through our transport infrastructure program of works,” WA Minister for Transport Rita Saffioti MLA said. 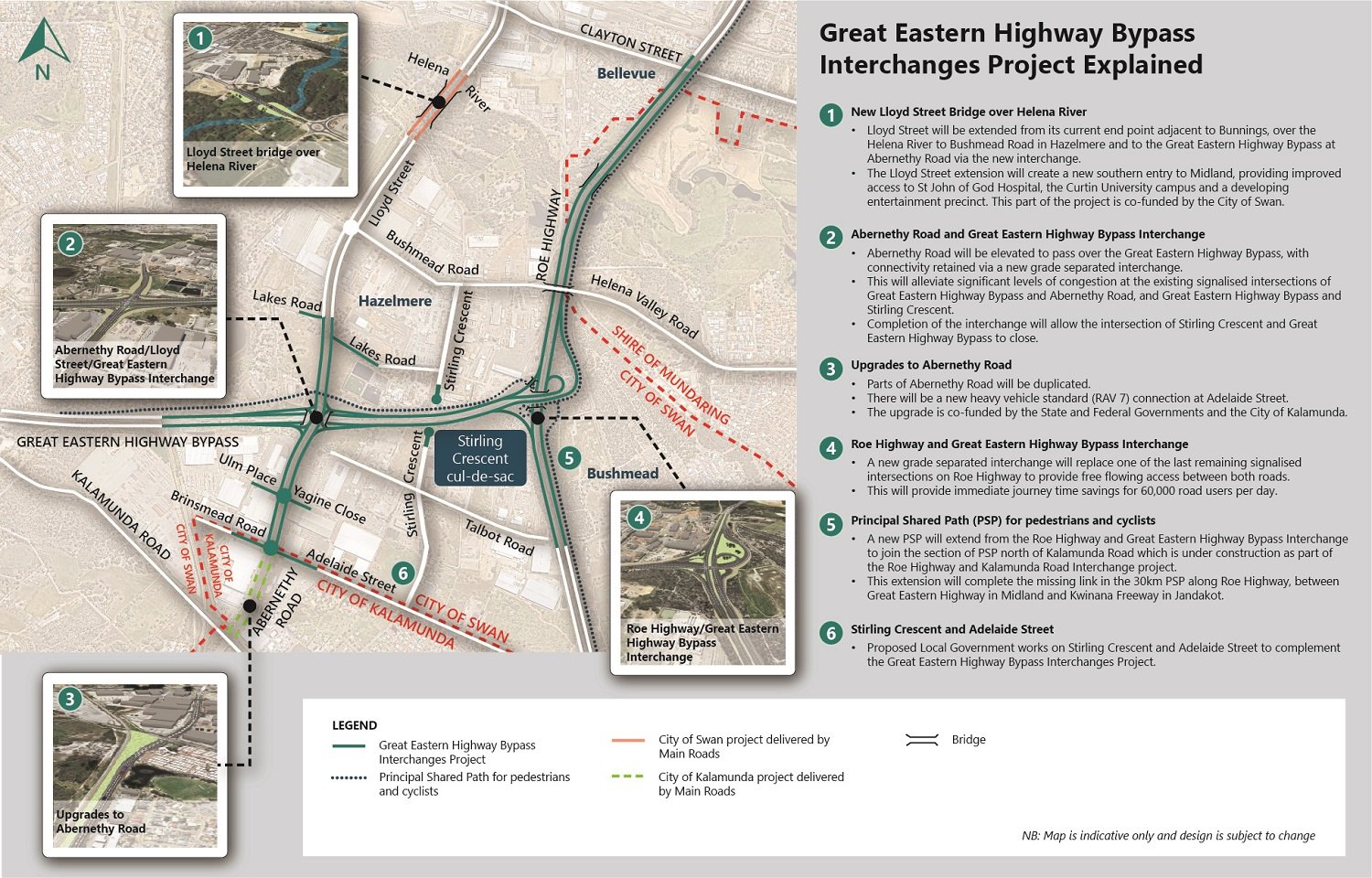 The Great Eastern Highway Bypass Interchanges project will include:

“This is another example of the Morrison Government funding critical infrastructure in WA through our record 10-year, $110 billion infrastructure investment program,” Federal Member for Hasluck Ken Wyatt MP said.

The project is jointly funded by the Australian and Western Australian Governments with contributions from the City of Swan and the City of Kalamunda.

Overall completion of the $386.5 million project is expected in 2024 and this development is expected to support up to 2,700 jobs.

“The Morrison Government is contributing $247 million to this important project through the Urban Congestion Fund, under which we are delivering 182 packages of work nationwide.

“The total number of Urban Congestion Fund projects that are now complete or underway nationwide is 76. A further 12 are expected to start construction this year.

“By the end of 2022, more than 80 per cent of all packages are expected to be completed or under construction,” Minister for Communications, Urban Infrastructure, Cities and the Arts Paul Fletcher MP said.

A new major milestone has been reached that will progress the $386.5 million Great Eastern Highway Bypass Interchanges project – a project that will deliver a new free-flowing gateway into Perth’s eastern suburbs.

Tenders are now open for the $38 million Bruce Highway—Tinana Interchange upgrade project, the latest upgrade under the $8.5b Bruce Highway Upgrade Programme.  Here are the key take-aways you need to know about the project scope, timeframes and tender information.

A new milestone has been reached by the $38.4 million Hallam Road Upgrade in Victoria, with BMD Group awarded the contract to deliver the vital upgrade to the key arterial road.