As part of a plan to transform major roads between Caloundra and Mooloolaba, the Queensland Government is committing $160 million through the recently announced 2021-22 State Budget towards the delivery of the Mooloolah River Interchange.

Including the funding commitment from the Australian Government, the total project investment is now at over $320 million.

This project will fix one of the worst bottlenecks in the Sunshine Coast and it is expected to create up to 290 jobs.

“We know fixing the Mooloolah River Interchange is a priority for Sunshine Coast residents.

“This funding commitment adds to our infrastructure investment on the Sunshine Coast, which includes more than $3.9 billion worth of road and rail upgrades supporting thousands of jobs,” Premier Annastacia Palaszczuk said. 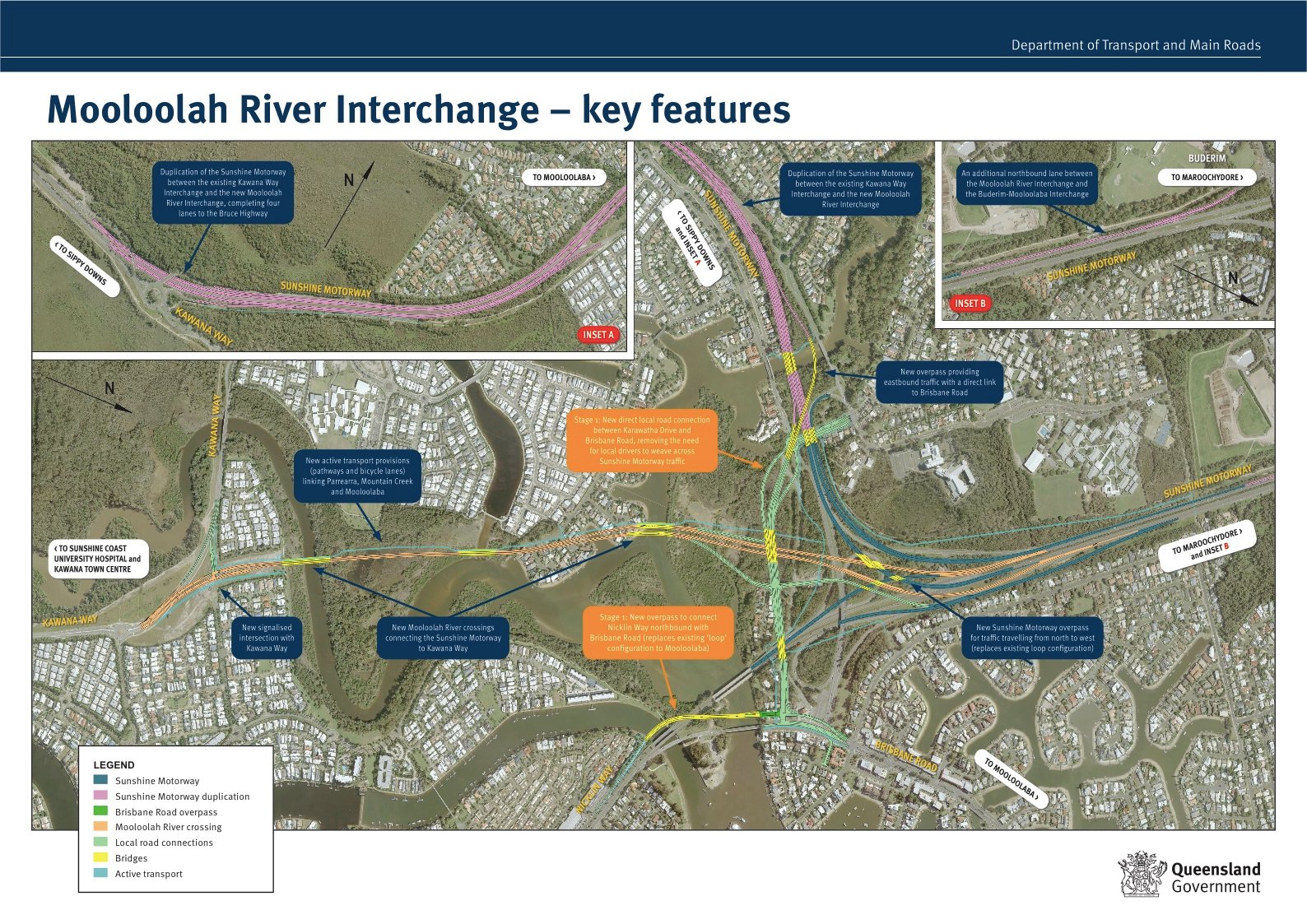 The Mooloolah River Interchange is part of the Queensland Government’s $52 billion four-year infrastructure program that will deliver projects across the state to Queensland’s COVID-19 Economic Recovery Plan.

“Our government is constantly looking to strengthen Queensland’s transport network, particularly in growth regions like the Sunshine Coast.

“Better roads come with a range of benefits for our communities, further improving liveability in the most liveable stat in Australia.

“This is a great announcement for the people of the Sunshine Coast and one that will make travelling locally easier and safer,” Treasurer and Minister for Investment Cameron Dick said.

The Mooloolah River Interchange development will include:

Once up and running, the new interchange will provide improved travel times between Maroochydore, Kawana as well as Caloundra’s growing communities.

“The upgrades will make the interchange safer and less congested, and mean quicker trips between the emerging Maroochydore CBD, the Sippy Downs university campus and the Kawana hospital precinct.

“More than 550,000 people are expected to be living on the Sunshine Coast in 20 years, so we need this upgrade to support the growth that is coming and take pressure off Nicklin Way,” Transport and Main Roads Minister Mark Bailey said. 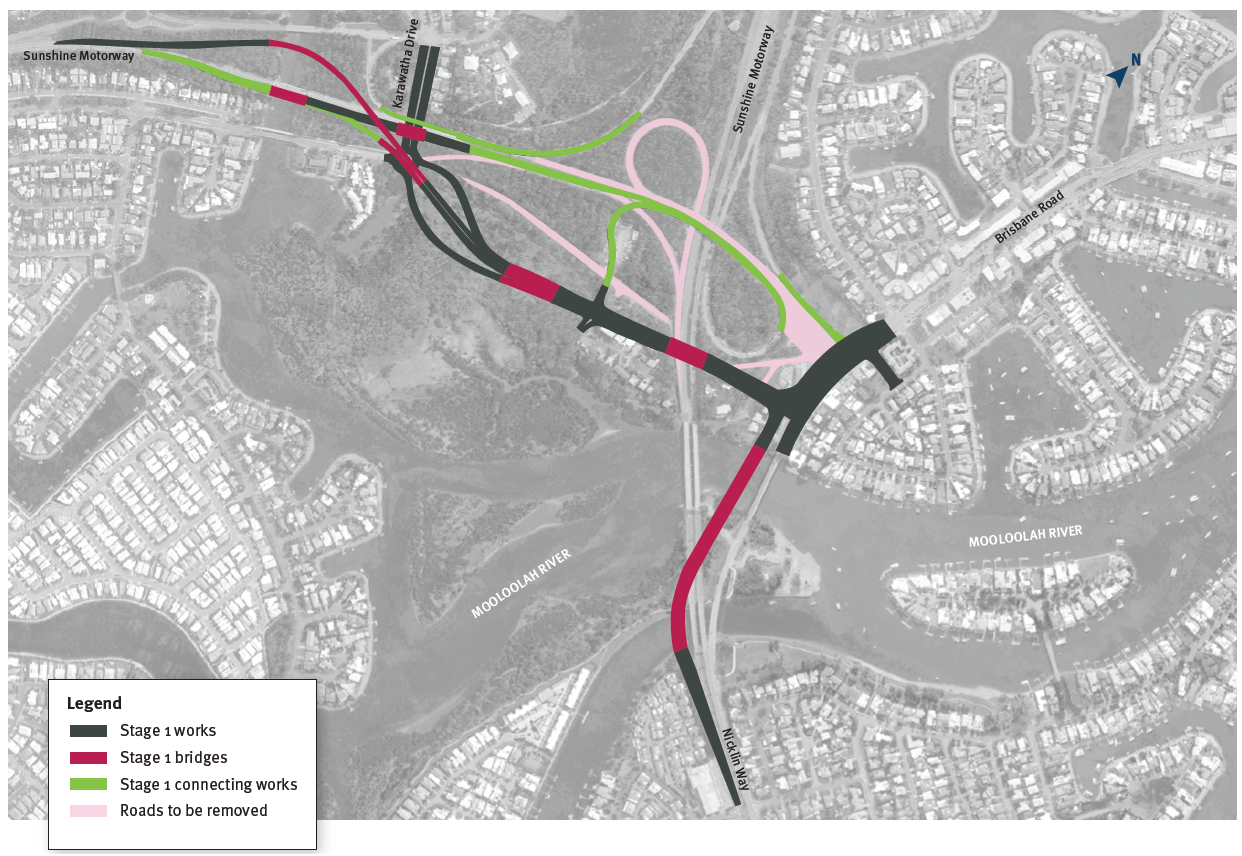 The $320 million joint funding for the Mooloolah River Interchange will deliver the first stage of works, which include the construction of a new Karawatha Drive connection to Mooloolaba and a new bridge that will link Nicklin Way to Mooloolaba.

On the other hand, planning will commence this year on a motorway that will run parallel to Kawana Way between Parrearra and Meridan Plains. This is part of the Southern Sunshine Coast Roads Improvement Study.

“We can’t rely on Nicklin Way being the major north-south road connection forever, so this planning is looking at options for a new motorway further inland to spread out traffic demand.

According to Member for Nicklin Rob Skelton, the Queensland Government is supporting the growth in Coast communities through its significant investment on road projects.

The Australian and Queensland Governments have committed $160 million each towards the Mooloolah River Interchange project and this is on top of the $7.5 million allocated by the latter to complete the detailed business case.

Over the coming months, community consultation on the planning layout will be conducted and feedback from the community will be incorporated in the detailed design – which is the next phase of the project.

Construction on the Mooloolah River Interchange will commence once detailed design is completed.

Various copper and zinc operations throughout North Queensland including operations in or near major mining towns such as Mount Isa, Cloncurry and Townsville mean Glencore is seeking to fill over 200 jobs.

DP Energy and Spanish company Iberdrola will be partnering to deliver a new hybrid wind and solar project in South Australia, with construction on the Port Augusta Renewable Energy Park (PAREP) anticipated to begin by mid-2020.