Brisbane's lord mayor Graham Quirk yesterday announced plans to construct a $1.54 billion high frequency subway system, known as "Brisbane Metro", in the inner city if re-elected.  A first of its kind in Australia, the "Brisbane Metro" would see sections of the south-east and inner northern busways altered and an underground subway system built to cater for a rubber-tyred metro service that would link Woolloongabba to Herston.

"Today I am announcing a vision for the next phase of infrastructure building to keep our city moving and plan for our future and keep Brisbane heading in the right direction.

The growth of our city and the demand on the bus network to feed this growth is looming as one of the greatest challenges Brisbane is facing.

Every day about 170,000 employees, visitors and students travel to or through the city centre, mostly by public transport and this is predicted to climb to 250,000 by 2031.

The CBD's existing bus infrastructure, already at capacity in a number of areas, will not be able to cope."

How the "Brisbane Metro" would work

Commuters would travel to either Woolloongabba or Herston bus stations and swap onto the metro, which is estimated to almost halve the existing peak hour commute times.

The proposed project would remove up to 200 buses per hour in morning peak traffic across Victoria Bridge, which would become a "green bridge", with general traffic banned, shifting the 800 cars that travel along the bridge daily to the William Jolly Bridge or to the Go Between toll bridge. 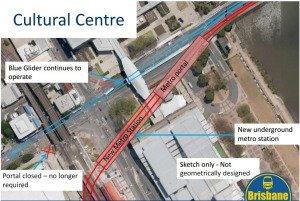 The Cultural Centre Station at South Brisbane would move underground to cater to the underground subway portal that would connect King George Square busway and link with the Inner Northern busway.

Cr Quirk said the council would fund, via borrowings, the "majority" of the $1.54 billion dollar project, however would not be drawn on an exact amount.

"We have demonstrated in the last 12 years we are capable of funding big scale projects," Cr Quirk said.

"We will be the major funder of this project but we will certainly be asking for support from the state government in particular and the federal government," Cr Quirk said.

"I am going to make this happen, the state government have to be co-operative, have to give approvals but we have to do something, if we do nothing, the delays in public transport are going to grow and grow.

"It is not fair and reasonable for what is essentially a state government responsibility for the state to walk away."

Cr Quirk said the state government's cross river rail project - an 18km rail line from near Sailisbury, under the Brisbane CBD to Bowen Hills, north of the CBD - was not going to answer the "broader transport issues" in Brisbane that have been "looming for several years", with the metro system proposal to act as a "supplement".

"The cross river rail project can stand alone and it will service the rail needs in the future, I support a further rail crossing, but what I am saying is that a further two thirds of the public transport function in our city is handled by buses so just doing a cross river rail is not the total answer, we need to do something to supplement that," Cr Quirk said.

"All around Australia, all around the world, modern cities are moving towards light rail. The evidence is conclusive. Modern light rail has consistently been proven to trump buses."

The first stage of Labor's future light rail – at this stage just an un-costed idea - would be to run somewhere between Newstead and West End. Mr Harding said his idea was to eventually grow the network to include Suncorp Stadium and the Gabba, the Royal Brisbane and Women's Hospital and Mater hospitals, then Hamilton Northshore and the PA Hospital.

The Gold Coast has a similar high profile light-rail project – and has promises of money for the next stage – from both state and federal governments. The Sunshine Coast has a draft route in place and is refining the route for light rail at the Caloundra-end of the Sunshine Coast.

However Cr Quirk said Labor's proposed costs were "fanciful" and that the existing blue City Glider bus service works perfectly well, is seven times cheaper to operate, set up and run than it would be for the light rail.

"They are undercooking what would be the real cost of a light rail network. Labor's eight-kilometre idea would have to make major changes to two inner-city bridges. You are never-ever going to do that for $700 million.  It would be more like double that at the very least."

Like all major cities of Australia, State Governments are considering the infrastructure answers to growing populations. Keeping a keen eye on infrastructure trends and developments is one of our expert tips to winning more hire work. After all, how will you know how and who to prospect if you're not up to date with the latest in proposed projects across your region? Check out our other three tips to increase your chances of winning hire work with our free Infographic by clicking the button below!

Motorists travelling across Brisbane’s north will soon experience less congestion and quicker travel times with an $80 million investment to fund congestion busting projects across the region.

Construction on the massive $158 million Brisbane International Cruise Terminal at the Port of Brisbane is set to launch later this year, with two principal contractors named to deliver works on the multi-million dollar project.