Contract to build SA Fleurieu Connections Package has been awarded

The $560 million project that will bust congestion as well as improve safety and boost economic growth in South Australia’s Fleurieu region is progressing well towards construction following the award of the contract for its delivery.

“This is another example of the Australian Government’s record $110 billion infrastructure investment plan in action.

“Projects like this one are helping to connect communities and improve road safety, while also creating jobs and supporting our economic recovery,” Deputy Prime Minister and Minister for Infrastructure, Transport and Regional Development Barnaby Joyce said.

Building the Victor Harbor Road Duplication and Main South Road projects are anticipated to support up to 770 full-time jobs annually during the construction phase.

The awarding of the construction contract is a major milestone towards the delivery of this “much-anticipated project” that will benefit thousands of South Australians.

“We’re fast approaching the holiday season when many people flock to the beautiful Fleurieu Peninsula and beyond, which can cause major traffic congestion along Main South Road.

“When the Fleurieu Connections Package is complete, the journey to the Peninsula will be faster and safer, giving friends and families more time to enjoy rather than sitting in traffic.

“This is just one of the many major projects planned, or already underway, as the Federal and SA governments continue to deliver a $17.9 billion infrastructure pipeline across our state,” South Australian Minister for Infrastructure and Transport Corey Wingard said.

Stage 2 of the project will include upgrading Main South Road from Aldinga to Sellicks Beach to have a ‘2+1’ lane road layout – two lanes in one direction and one lane in the other that alternates every few kilometres - along with other road treatments to improve safety and help boost the road’s capacity. 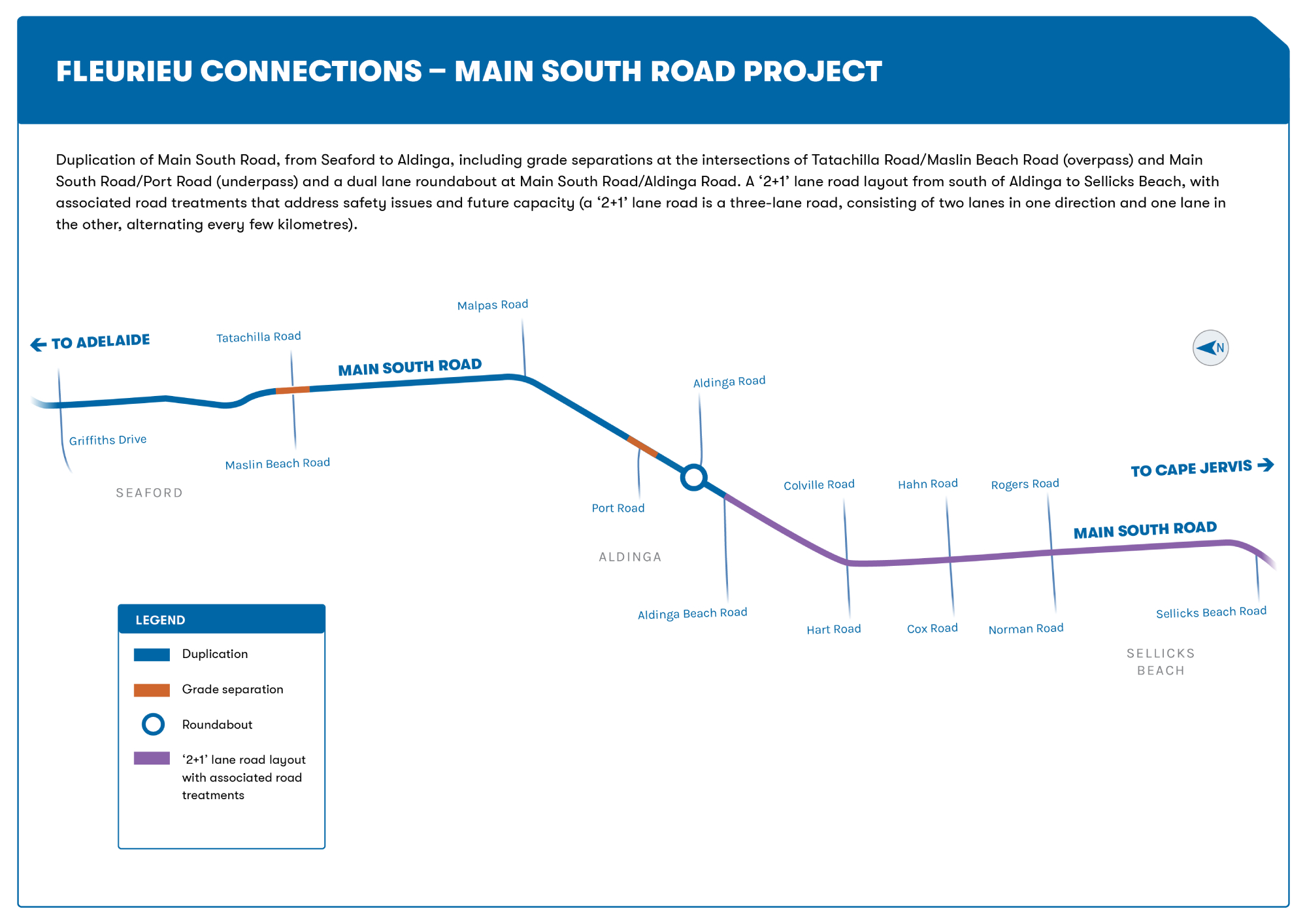 On the other hand, the Victor Harbor Road Duplication project will include duplicating the road between Main South Road and the McLaren Vale turn off together with additional safety treatments along Victor Harbor Road, including an overtaking lane at Hindmarsh Valley.

This section of the Fleurieu Connections Package will also include a planning study that will investigate a preferred solution for Victor Harbor Road between Main South Road, McLaren Vale and Tatachilla Road as well as to Willunga Hill.

“The significant investment the Morrison and Marshall Governments are injecting into these projects will give not only benefit [to] local motorists and tourism operators but boost jobs opportunities during construction.

“Our Government is helping to deliver the infrastructure projects that best suit the needs of the community and play a critical role in the state’s ongoing economic recovery,” Senator for South Australia and Minister for Finance Simon Birmingham said.

The Fleurieu Connections Alliance is delivering this $560 million project in association with the South Australian Department for Infrastructure and Transport, with major construction to commence in early 2022 and completed in 2024.

“We are pleased to have the opportunity to deliver these important projects in South Australia aimed at reducing travel times and increasing safety for the local community and visitors to the Southern Fleurieu region. CPB Contractors will deliver the works with a strong focus on safety, quality, the environment and on minimizing impacts on the local community,” CIMIC Group Executive Chairman and Chief Executive Officer Juan Santamaria said.

With early works ramping up at the site of Albemarle’s $ 1 billion Kemerton lithium project, BGC Contracting has announced that it is undertaking the earthworks which commenced in January of this year. This is the company’s first venture into the “Lithium Valley” of Western Australia.

Albemarle Lithium is ramping up construction on the $1 billion Kemerton lithium project in Western Australia as the company awards a new contract for the delivery of infrastructure to Kerman Contracting.