Contracts have been awarded for works to seal an additional 35 kilometres of the Peninsula Developmental Road (PDR) which is part of the $260.5 million Cape York Region Package (CYRP). Works will commence on Coen South and Archer to Wolverton this year.

“The impetus behind the $260.5 million CYRP is to facilitate economic growth in the Cape York region by upgrading key roads and infrastructure to better connect areas of economic opportunity with Indigenous and other local communities.” – Minister for Infrastructure and Transport Darren Chester

After a comprehensive procurement process, the following contractors have been chosen to work on the CYRP:

According to Queensland Minister for Main Roads and Road Safety Mark Bailey, these successful contractors are keen to begin working on the project and have been in discussions with local Cape York businesses and training providers about it. 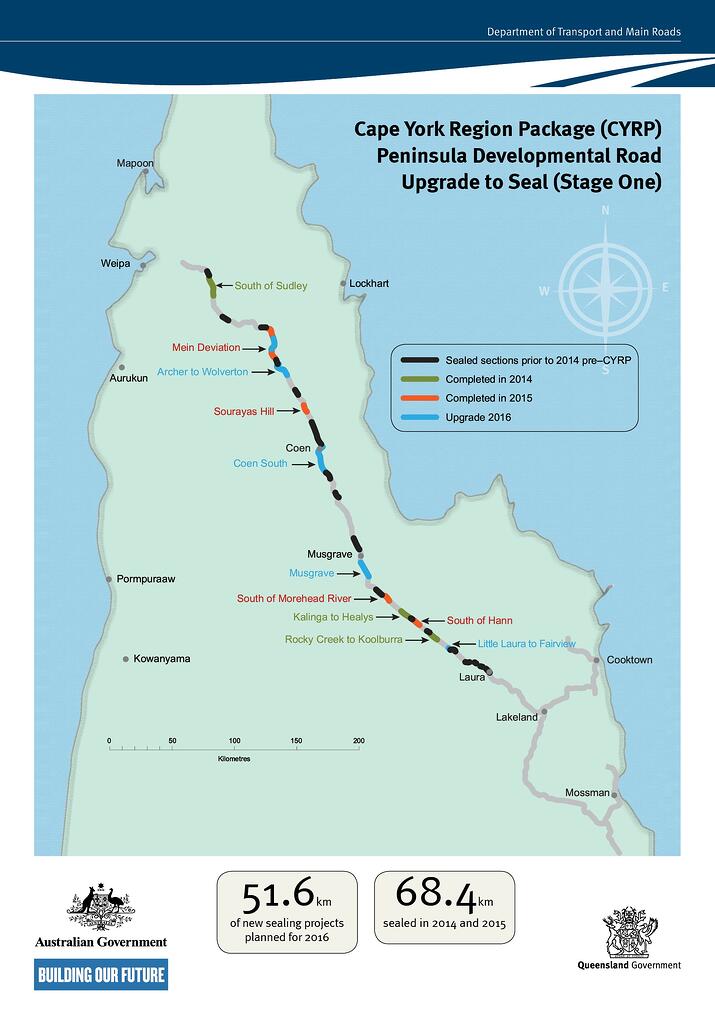 Minister Bailey disclosed that works on the Coen South and Archer to Wolverton will connect to the existing bitumen seal. Motorists in the Coen area will be able to enjoy 53.5 kilometres of uninterrupted sealed road and those in the Archer River area will have 52.3 kilometres of sealed road before returning to unsealed conditions.

At least 180 direct jobs will be created for the projects being delivered this year, according to Treasurer and Minister for Aboriginal and Torres Strait Islander, Curtis Pitt.

“The Department of Aboriginal and Torres Strait Islander Partnerships has already surpassed the jobs targets outlined in its Service Delivery Statement but I’m confident we can do even better, so I encourage Indigenous businesses to put in competitive tenders to be involved in this work.” – Minister Curtis Pitt

According to Member for Leichardt Warren Entsch, works will commence on the PDR in the coming weeks. RoadTek, who was previously awarded the contract to work on the 12 kilometre Musgrave project, is already on site. Tenders for the 4.6 kilometre Little Laura to Fairview projects was closed on 4 August 2016.

“The amount of continuous bitumen seal on the PDR will have considerably grown by the end of 2016.

The CYRP is not just seeing improvements in infrastructure but also real and ongoing benefits to the people of Cape York.” – Member for Leichardt Warren Entsch

Watch this space for more updates on this project. Subscribe to the PlantMiner newsletter today and start receiving industry news and project updates straight to your inbox.

Residential developer Metro Property Development has begun works on stage one of its luxury homes project in Sydney. The $260 million project includes the construction of town homes and apartments located at 88 Centenary Drive on the Strathfield Golf Club site.

Majella Property Development – a Brisbane-based developer – is pushing forward with its plans to transform the historic Broadway Hotel in Woolloongabba, with the development application already submitted to the Brisbane City Council. The $260 million development on the 3,420sqm site will encompass 44 Balaclava Street as well as 85 and 93 Logan Road.