How fast could you travel if Australia had high speed rail?

There's a renewed push for Australia to act now on a high-speed rail system that will transport people from Melbourne to Brisbane faster than air travel - and the "stars are aligning" according to Torkel Patterson, vice-chairman of the International High Speed Rail Association. Speaking before the House of Representatives standing committee on infrastructure, transport and cities, Torkel confirmed "Australia's flirted with [a high speed rail] for a long time, I think this is the time to make a decsision." High speed rail networks already operate in countries like Japan, China, Russie, France, Spain, Poland and are currently under construction in the US - while the idea for Australia's own fast train has meandered for years.

A proposal exists to build a high-speed rail system that would connect Brisbane, Sydney, Canberra and Melbourne across a dedicated 1748km route. We took some of the best high speed rail systems in the world and figured out how quickly they could cover the popular Australian routes of the proposal.

At Chinese speeds, how fast could you get from Brisbane to Sydney? 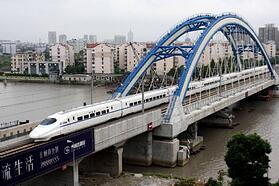 At Japanese speeds, how fast could you get from Sydney to Canberra? 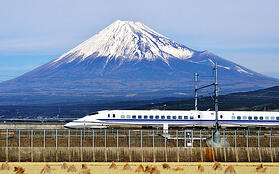 At Europe's speeds, how fast could you get from Canberra to Melbourne? 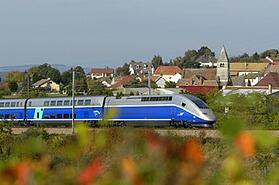 What's actually on the table for Australia's high speed rail ? 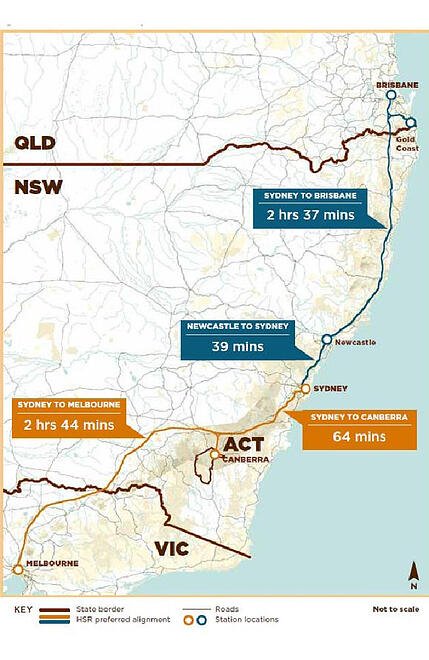 Labor spokesman for infrastructure and transport and fast train advocate Anthony Albanese will reintroduce a private member’s bill to parliament tomorrow calling for a national authority to oversee plans towards making high-speed rail a reality.

According to Labor, construction could start in 2027, with the first stage — a Sydney to Melbourne line — completed by 2040. The whole network would be passenger-ready by 2065.

Mr Albanese reported strong international interest in any future Australian project, claiming “I have met with Japanese, Chinese, French, Italian and Spanish companies who are engaged with this process and would want to participate in an Australian high-speed rail network. Japan has had a high-speed rail office in Sydney for decades — Japan is interested in particular.”

Dr Bygrave from Beyond Zero Emissions said re-establishing a high-speed rail advisory group was key, as it would untangle discussion and planning from political party rooms.

He said the next steps were to preserve the chosen rail corridor by securing the support of relevant state and territory governments, determine the funding model — public, private or both — and then integrating the rail link into Australia’s existing transport networks.

“The benefits will accrue and last over many generations and election cycles,” he said.

“We’re 50 years behind countries in Europe and Japan, and we can’t imagine a future in Australia without high-speed rail — I mean, we’re still driving up and down the Hume Highway.”

Population trends continue to drive huge infrastructure proposals and projects across the world. If you're dreaming of the job opportunities of a 1748km rail project, and wondering how facts like these can help support your business, check out our free guide on 4 tips to help increase your chances of winning hire work.

John Holland given $1.1b budget to target residential development and hotel investment

The contract to deliver a $300 million government office complex in Canberra has been awarded. From six shortlisted tenderers, Canberra-based company Capital Property Group (CPG) was chosen to transform the existing car park in Civic into a 20,000 square metre office building that will house at least 1,700 public servants by October 2020.

Watpac Limited is set to build the Australian Catholic University (ACU) Saint Teresa of Kolkata Building in Melbourne, with the company awarded a $206 million design and construct contract.