The package of works is part of the Victorian Government’s $2.4 billion commitment to remove at least 20 level crossings by 2018 and 50 by 2022. Revenue to CPB Contractors will be confirmed at contract execution.

Construction is scheduled to commence in June 2016 and will be complete by mid‐2018. 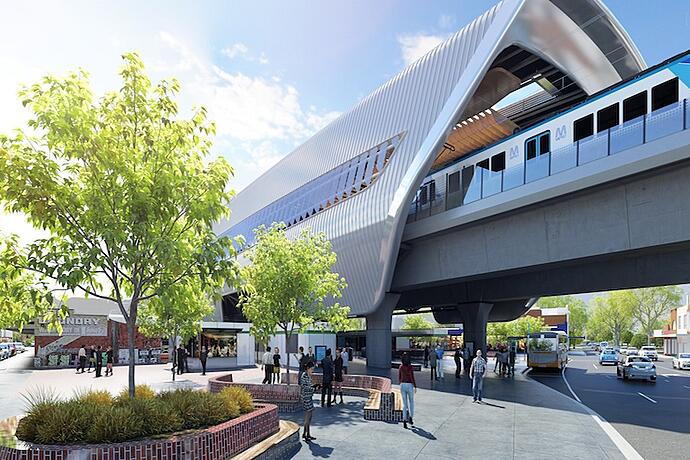 The Alliance beat Excelerate, a consortium including John Holland, Kellogg Brown and Root, McConnell Dowell Constructors and Jacobs. Both consortiums were shortlisted in early July 2015.

The winning bidder used PlantMiner to source rates for their tender.

The $1.6 billion project to remove every level crossing between Caulfield and Dandenong also includes five new stations to be built at Carnegie, Murrumbeena, Hughesdale, Clayton and Noble Park, and upgraded signalling and power along the corridor.

You can learn more about each of the level crossing sites:

The innovative design centres on three sections of modern elevated rail, which will create 225,000 square metres – the equivalent of 11 MCGs – of community open space for new parks, playgrounds, sporting facilities, car parking and a range of other uses that will be chosen by locals.

This modern design built over the existing rail line will also spare passengers and drivers years of disruption during construction. The majority of the work can be completed with trains and roads running normally.

We are inviting the community to have their say on the proposed designs by visiting our Your Suburb, Your Say engagement portal from 8 February 2016.

The Caulfield to Dandenong package will create more than 2,000 jobs and be delivered by a consortium including CPB Contractors and Lend Lease. Construction will begin this year, and be completed in 2018.

Have you been watching this project closely? Want to know what the Level Crossing Removal Authority was looking for when it considered the two shortlisted tenders? We'll you're in luck - we've created this free eBook based on a State Government Tendering workshop which lists the three methods evaluating officers use to distinguish bids. Check it out!

A major contract has been awarded to the Public Transport Project Alliance (PTP Alliance) to deliver works on the $174.3 million Oaklands Park level crossing removal project in South Australia. The contract award signals that works on the project can begin immediately.

$174m Oaklands Crossing upgrade in SA progresses to the next stage

Works are progressing well on the $174.3 million Oaklands Grade Separation Project - a project that will upgrade the Oaklands Park level crossing - in South Australia with the completion of piling works and the beginning of major excavation works on the project.

Expressions of Interest (EOIs) have been called for the delivery of the $174.3 million Oaklands Park level crossing removal project in South Australia.