Construction will soon be underway on new twin metro rail tunnels which will run under the Sydney Harbour and the heart of the CBD, with the major $2.81 billion tunnelling contract signed and awarded to John Holland CPB Contractors Ghella Joint Venture.

Works will begin immediately to get the first of five tunnel boring machines in the ground by the end of 2018.

“Today’s historic milestone unlocks a generational change to the way people will get around Sydney.

“The scale of this project and what it will do for the ease and speed of travelling across Sydney is hard to comprehend. We’ve done the hard yards and now it’s delivery time for the next stage of Sydney Metro,” Premier Gladys Berejiklian said.

According to Transport and Infrastructure Minister Andrew Constance, the line will extend the new metro rail from Sydney’s North-West into the City and Bankstown which will connect to the new metro stations that are already under construction at Castle Hill, Bella Vista, Rouse Hill, Kellyville and beyond.

“This new metro line will eventually stretch 66 kilometres and connect dozens of suburbs along the way. When services through the City start in 2024, the tunnels will move more people than the Harbour Bridge and Sydney Harbour Tunnel combined,” Mr Constance said.

The contract will involve: 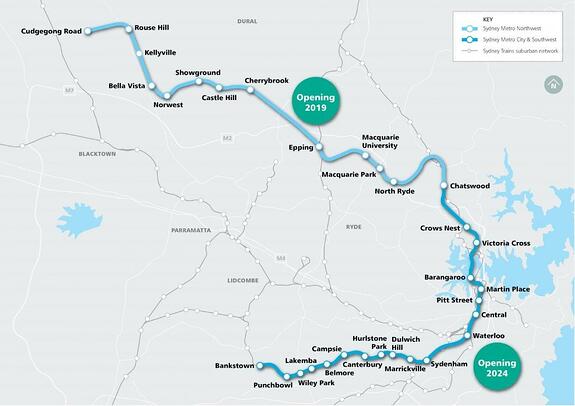 Crushed rock will be removed by barges for the excavation at Blues Point, Barangaroo and under Sydney Harbour, following community consultation – which will reduce impacts to the road network as well as cutting truck movements.

“The JHCPBG joint venture partners are honoured to have been selected to work once again with the NSW Government to build a lasting legacy that will transform Sydney – creating massive economic opportunities and greatly improving the daily lives of so many people,” John Holland Chief Executive Officer Joe Barr said.

Watch this space for the latest updates on the Sydney Metro project as well as other industry news and project updates by subscribing to Felix Project News.

Construction is now underway on the Atlas Gas Pipeline Project located about 20 kilometres south-west of Wandoan in Queensland. This project is being delivered Jemena and Senex Energy together with construction partners Valmec and Spiecapag.

Senex Energy and Jemena have signed an agreement that will fast track the delivery of the Atlas Gas Processing Plant and Pipeline (AGPP). Under the agreement, Jemena will build, own and operate the AGPP, which will be connected to Senex’s new Atlas gas field in the Surat Basin in Queensland.

Major works to deliver a new river crossing over the Clyde River at Nelligen in New South Wales have commenced and motorists travelling on the Kings Highway are a step closer to having a safer and more reliable journey along this route.