According to the second report card on the Western Sydney Infrastructure Plan, there has been a surge in jobs growth after the New South Wales and Australian Governments’ $3.6 billion investment on infrastructure for the region.

There has been significant progress on various road projects in the region and local businesses have been capitalising on the upgrades which were designed to develop the areas where there is a steady growth in population. The upgrades highlighted on the Western Sydney Infrastructure Plan were also designed to efficiently service the proposed Western Sydney Airport located at Badgerys Creek.

The second report card shows that construction on three major road projects has begun in the last 12 months. This includes the 35-kilometre $1.6 billion The Northern Road upgrade which has generated more than $30 million in contracts awarded to Western Sydney contractors and suppliers.

The Australian and NSW Governments are investing on upgrading roads in the State ahead of the Western Sydney Airport’s opening in mid-2020. These road projects are delivering jobs and growth which the region needs while ensuring that long-term aviation needs are met. 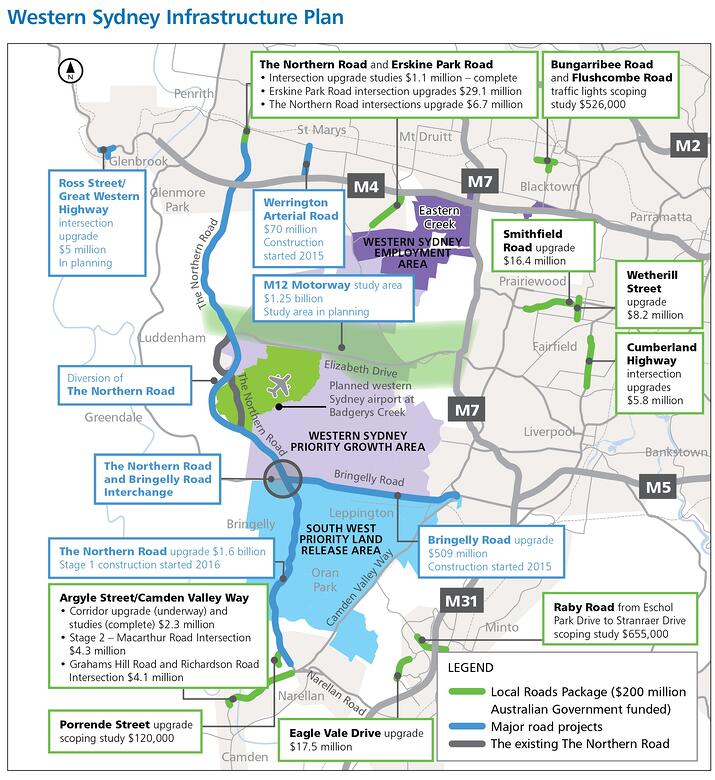 The report card also contains recent progress in plans for the airport project which includes the Environmental Impact Statement (EIS) finalisation. Works to prepare the airport site is now underway and a joint discussion paper has been released to seek public feedback for Western Sydney’s rail needs.

Work is stimulated for the local industry with this joint investment and this is highlighted by a 240 per cent increase in the number of local businesses being involved on these projects.

More than 150 local suppliers and contractors have been benefiting from the various major road projects being delivered. These projects include upgrades on Bringelly Road, Werrington Arterial Road and The Northern Road. The number of full-time jobs has also increased by almost one-third which is equivalent to more than 430 jobs.

About 4,000 direct and indirect jobs will also be added during this 10-year programme, which progress is currently on track is set to open ahead of the new Western Sydney Airport in mid-2020.

Even more opportunities are expected to open as major works on this programme is moving towards the delivery stage.

Both the Australian and NSW Governments are committed in ensuring that quality infrastructure is in place to cater to an additional one million people that is expected to reside within Western Sydney by 2031.

Stay up to date with the latest industry news and project updates by subscribing to Felix Project News.

Another milestone has been reached on the M80 Ring Road upgrade in Victoria, with Expressions of Interest (EOIs) opened to complete the remaining sections of the project.

The Brisbane City Council is calling for expressions of interest to design and construct the upgrade of the Inner City Bypass, with the successful tenderer to be announced later this year.

The project was announced in last year's council budget and should be completed in 2018.