Felix Project News Recap: Most viewed posts in the first half of 2022

Over the past six months, we have reported on more than 100 projects from different sectors across the Australian states and territories.

In this post, let us recap the top three most viewed project posts each month from January to June 2022.

Project summary: The joint venture between CIMIC Group CPB Contractors and Ghella has been awarded a $1.8 billion contract for the Sydney Metro – Western Sydney Airport Station Boxes and Tunnelling Works (WSA-SBT). The package of works includes the design and construction of the 9.8-kilometre twin tunnels and the excavation for the new stations at St Marys and Orchard Hills stations as well as Airport Terminal Station and Aerotropolis Station along with the delivery of service facilities at Bringelly and Claremont Meadows.

Latest project update: Site establishment and preparatory works will be carried out prior to the first of four mega tunnel boring machines breaking ground in early 2023.

Project summary: The Northern Territory Government is building a new ship lift facility at East Arm. Two shortlisted tenderers have been announced on January 2022 – Territoria Civil and the Clough-BMD Joint Venture. The two tenderers will undergo the delivery of vital design and development works for the new Darwin Ship Lift project. Once completed, the facility will be able to cater for the maintenance and servicing of marine vessels.

Latest project update: It was recently announced that the Clough-BMD Joint Venture is the preferred contractor for the project, which is estimated to generate 250 jobs at peak construction period. The Northern Territory Government also announced a $515 million investment towards the project.

Project summary: The New South Wales Government has signed an agreement with the John Holland and CPB Contractors joint venture for the design and construction of the Southern Tunnelling Works package (Stage 1) as part of the Western Harbour Tunnel development. The first stage works will include additional works such as 1.7 kilometres of mainline road tunnels that run from the Rozelle Interchange to Birchgrove Oval along with ventilation tunnels, ramps and other services.

Latest project update: The Southern Tunnel Works package is due to begin major construction in mid-2022. Shortlisted tenderers for Stage 2 – Northern Tunnelling Works package have also been announced as well as the contract for Asset Management Services awarded.

Project summary: Snowy Hydro Limited has appointed CIMIC Group company UGL as the principal contractor for the development of a power generation plant as part of the Hunter Power Project in Kurri Kurri, New South Wales. The project will include the construction of a 660MW power generation plant that consists of two heavy-duty F-class gas turbine generators and related axillaries that operate using dual fuel sources.

Project summary: The Australian Government shows its support towards the development of Perdaman’s urea project in Western Australia through a $255 million investment from the Northern Australia Infrastructure Facility (NAIF). The Karratha Urea Project will deliver a processing plant that will convert Western Australian liquefied natural gas into about two million tonnes of urea a year. The project is also expected to generate up to 2,500 jobs during its construction and 200 jobs once operational.

Latest project update: The Clough-Saipem joint venture has signed a revised engineering, procurement and construction contract valued at US$2.7 billion, which is the result of changes in market conditions and logistical challenges faced in recent times. The beginning of major construction is yet to be announced.

Project summary: Three consortia have been shortlisted for the Eastern Tunnelling Package for Sydney Metro West. This package of works will include a 3.5-kilometre twin tunnels under Sydney Harbour between The Bays and Sydney CBD along with the excavation of the Pyrmont and Hunter stations.

1. Proposed Urannah Dam project in QLD a step closer to being built

Project summary: A bilateral agreement has been signed by the Australian and Queensland Government for the proposed Urannah Dam project. The approximately $2.9 billion development will deliver a dam and hydro-electric scheme within the Burdekin Basin in the Broken River Valley. The proposed project is also expected to support more than 1,800 jobs – including 1,200 jobs during construction and 600 jobs once operational.

Latest project update: The Australian Government has committed $483 million towards the project as part of the 2022-23 Federal Budget. The project is currently awaiting further funding from the State Government to get construction going.

Project summary: The Australian Rail Track Corporation (ARTC) has appointed Regionerate Rail to deliver the Gowrie to Kagaru section of Inland Rail. This project will deliver approximately 128 kilometres of new and upgraded track through a geographically challenging section of the Inland Rail development together with a 6.2-kilometre tunnel through the Great Dividing Range. The Queensland section of Inland Rail is divided into three projects – Gowrie to Helidon, Helidon to Calvert and Calvert to Kagaru.

Latest project update: The three projects are currently in the Reference Design stage. Construction timing is yet to be announced.

Project summary: Through the 2022-23 Federal Budget, the Australian Government is committing $5.4 billion towards the Hells Gates Dam. The proposed project will help open up around 60,000 hectares of irrigation across three agricultural zones in the Burdekin region, which will be supported by a 2,100-gigalitre dam and boosted by three downstream irrigation weirs. The Hells Gates Dam project is anticipated to create more than 7,000 jobs.

Latest project update: The project is still subject to completion of the final business case, which is due to be completed in June 2022. Construction timing on the project is yet to be determined.

1. New wharf at WA Port of Dampier takes a step closer to construction

Project summary: Expressions of Interest for the design and construction of the new wharf has been announced. The construction of the new wharf south of the existing Dampier Cargo Wharf will help facilitate the development of the $4.3 billion Perdaman Urea Project. This project will also deliver a new berth pocket that is 13.2 metres deep with a manoeuvering area of 11 metres deep.

Latest project update: Construction timing is yet to be announced.

2. Construction begins on $1bn Olive Downs coal mine in QLD

Project summary: Pembroke Resources’ Olive Downs coal mine is located in the Bowen Basin. The $1 billion project will consist of major infrastructure such as a coal handling and preparation plant, rail spur, train load-out facility, coal conveyor, stockpiles, electrical transmission lines as well as water pipelines and access roads. The project is expected to generate up to 1,000 local jobs in the region along with about 700 construction jobs to deliver the mine and associated infrastructure.

Latest project update: Construction is now underway, and CIMIC Group company Thiess has been appointed as the Mining Services Contractor for the project.

Project summary: Lynas Rare Earths’ Kalgoorlie Rare Earths Processing Facility is going to be built on Lot 500 Great Eastern Highway and the project will comprise of a refinery that will process rare earth concentrates from the company’s Mt Weld mining operations. The $500 million project is expected to create approximately 290 jobs during its construction phase and support up to 128 new operational jobs. 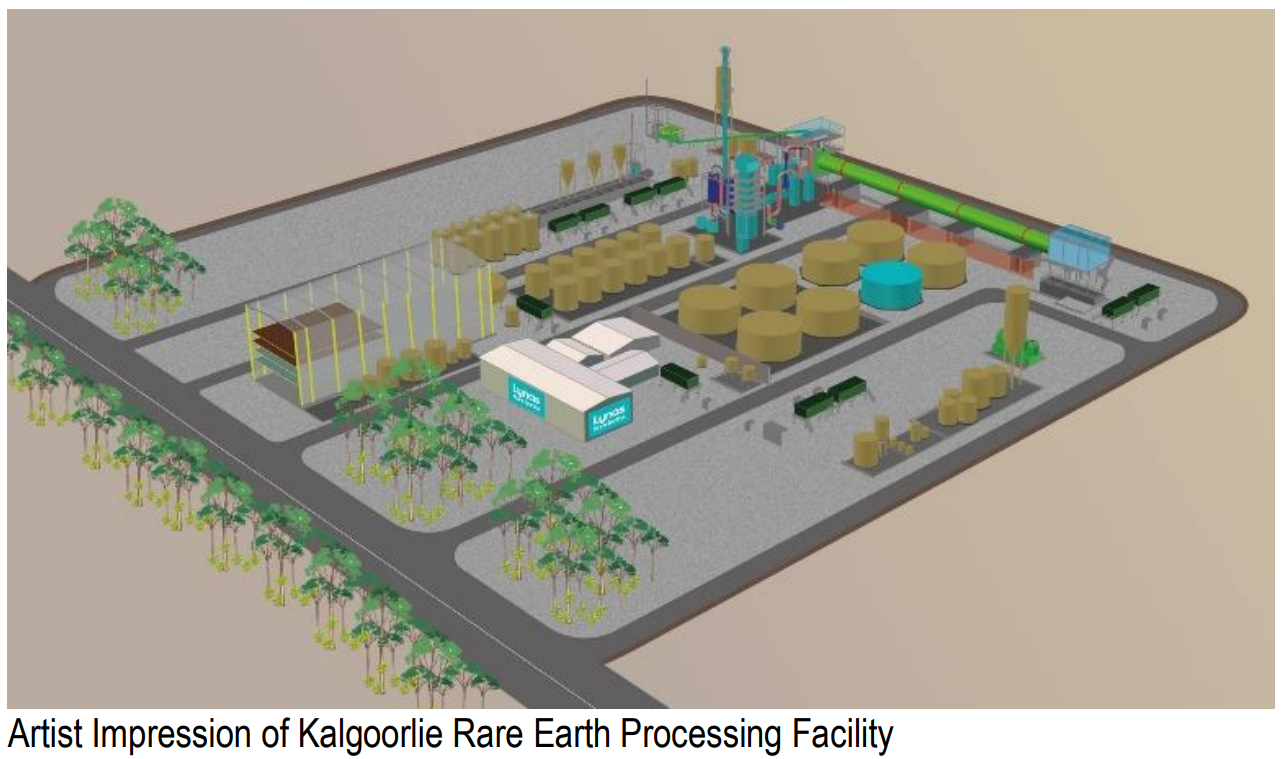 Project summary: Genex Power’s $777 million Kidston Pumped Storage Hydro (K2-Hydro) is the flagship project at the Kidston Clean Energy Hub in Far North Queensland. The project is being built at the old Kidston Gold Mine and will utilise existing infrastructure on site. K2-Hydro is anticipated to generate up to 430 jobs at peak construction period.

Latest project update: The project is already under construction and works are being undertaken by the McConnell Dowell and John Holland joint venture. K2-Hydro is expected to be operational by early 2025.

Project summary: The M12 Motorway project is being delivered as part of the $4.4 billion Western Sydney Infrastructure Plan (WSIP). The $2 billion project will include building a 16-kilometre east-west motorway that runs between the M7 Motorway, Cecil Hills and the Northern Road in Luddenham. Construction of the M12 Motorway is split into three sections – Western, Central and Eastern sections. This project is expected to support up to 2,400 jobs during its construction phase.

Project summary: The Nolans Rare Earths Project is located about 135 kilometres north of Alice Springs and it will be comprised of a mine, processing plant and other related infrastructure. The project is expected to have an initial operational life of 38 years. First production of NdPr Oxide from the Nolans Project is anticipated in 2025, with full production capacity by 2027. The approximately $1 billion project is estimated to create more than 600 jobs during its construction and 280 jobs once operational.

Latest project update: Arafura Resources and Hyundai Motor Company have signed a Memorandum of Understanding (MoU) for an offtake agreement that further secured the development of the project and pushes it towards Final Investment Decision (FID). Construction timing for the project is yet to be announced.

Project summary: The proposed redevelopment of Victoria’s Melbourne Cricket Grounds (MCG) will include rebuilding the southern stand – named the Shane Warne Stand – to increase the stadium’s capacity to 105,000 and include better facilities for event and non-event days. The new grandstand will also feature new restaurants and bars, and a possible hotel that will help generate additional revenue to fund the approximately $1 billion redevelopment project.

Latest project update: A concept image of the MCG redevelopment has been released and the Victorian Government has committed $2 million to complete the project business case. Construction is projected to commence in 2027 following the opening ceremony for the 2026 Commonwealth Games.

Project summary: CIMIC Group company CPB Contractors has been awarded a $130 million contract by BHP for the delivery of wind fences at the Nelson Point and Finucane Island operations in Port Hedland. The Wind Fenced Project will involve the construction and installation of dust mitigation fences to shield stockpiles and help reduce dust lift-off. These fences are part of BHP’s $300 million commitment for its Pilbara Air Quality Program that aims to improve air quality in the region. The project is expected to support 150 jobs during its construction, with up to 10 per cent Indigenous employment.

Latest project update: Construction is scheduled to begin in August 2022 and will take 14 months to complete.

Project summary: The Coffs Harbour Bypass will upgrade approximately 14 kilometres of the Pacific Highway at Coffs Harbour in New South Wales. The project will run from south of Englands Road roundabout to the southern end of the Sapphire to Woolgoolga project. The $2.2 billion project will include the construction of a four-lane divided motorway that bypasses the Coffs Harbour CBD, including three tunnels at major ridgelines. Once open to traffic, the Coffs Harbour Bypass will remove thousands of vehicles from the centre of town and provide motorists with reduced travel time by avoiding 12 sets of traffic lights. The project is anticipated to create up to 600 direct jobs during its construction.

Latest project update: The Ferrovial Gamuda Joint Venture has been awarded the design and construct contract for the Coffs Harbour Bypass and major construction is scheduled to begin early next year.

Don’t miss out on the latest construction, mining and infrastructure project updates by subscribing to Felix Project News today.

The green light has been given to the development of the Rhodes Ridge deposits in the East Pilbara region of Western Australia and the State Government welcomes this joint venture decision from Rio Tinto and Wright Prospecting.

Ramelius Resources has awarded a new contract valued at $95 million to MACA Limited for the delivery of more works at the Tampia gold project in Western Australia.